Almost Over & Out, Thank Goodness 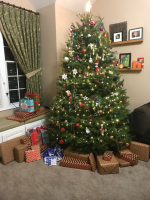 We're home, at last and finally, after a longer-than-intended pit stop in PA trying to replaced a blown tire on the minivan. No, not THAT tire. That tire was successfully installed and is working just fine. Another tire. There was an incident in Valley Forge involving my in-laws and a wrong turn and conflicting GPS directions and a curb collision while we were still in NYC. So while at least this incident did not involve any more Foyer Tires, the hassle and unexpected expense of it all means 2016 -- along with everything else that was good and pure -- has gone and destroyed the whimsy and weirdness of #TIREWATCH, because neither of us want to hear another word about tires again. 2016, man. Please wrap this shit up already. Our house no longer looks like this, but the aftermath of all of this, plus somehow three times as many Amazon boxes piled up in hallways and corners. And now suitcases and even more gifts from grandparents and friends. Noah came home from school last Friday, sat me down and demanded to know the truth about Santa. Jason and I agreed that we'd continue to play along this year, as... Read more →

This Post Was Written By a 39 Year Old Human, God Help Us All 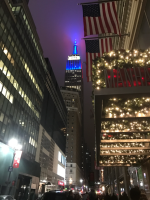 Hi! Hi hi hi. I am writing this, live and in-person from New York City, but on my phone because I cannot get the hotel's WiFi to work. So I shall be brief because this feels like I'm typing a really really long text message and the only times I write really really long text messages is because I'm either super mad at someone ("here is everything I would say to you on the phone but won't because I don't call people on the phone!! thus I shall attempt to resolve our conflict in the least productive way!!")...or if I've been ignoring their text message for a long time and have to explain my bullshit reasons for doing that. So since I'm not mad at anyone, let me state that my bullshit reasons for ignoring my blog are 1) yesterday was my birthday, 2) Jason surprised me with a little just-us getaway to NYC, and 3) I'm 39 now, Jesus. I feel like that will be an excuse for a lot of things, going forward. The weather here has been gorgeous so we've mostly just done a lot of aimless walking, shopping and drifting from wine bar to wine bar.... Read more →

Time Is a Flat Tire

Ha ha, look at me. I'm funny. WHAT THE WHAT THE FRESHEST OF HELLS NO NOT AGAIN JASON PLZ I AM BEGGING YOU OMG WHAT Touché, you ridiculous bastard. (FML! Hope everybody enjoys their holidays this weekend! I am frantically emailing teachers [so many teachers, holy shit] last-minute gift cards while pretending that was my plan all along and not because I forgot and then I have to go buy food for Christmas dinner and take Beau to the groomers and the kids to see Rogue One [MOST IMPORTANT] and yes, replace a tire on the minivan because there's a slow leak and I am a grown-up who is in charge of my car, my destiny and also my motherfucking foyer.) Read more →

Posted at 10:57 AM in breathtaking dumbness, TIREWATCH | Permalink | Comments (14) Me: Okay Ike, it's time to write your Christmas list for Santa. Ike: Yay! How do you spell Dinosaur Flitcher? Me: ...huh? Ike: Dinosaur. Flitcher. That's what I want the most. Me: Dinosaur...Flitcher? Ike: No, not Flitcher. Flitcher. Me: Could you maybe describe it and does it have anything to do with Star Trek. Ike: It flitches between dinosaurs that are alive and then are dead. Me: You mean switches? A Dinosaur Switcher? Ike: Yes. How do I spell that. Me: Like...is it a flip book? A game or something? Ike: Mom. It's a Power Rangers toy. It's made of dinosaurs and flitches around so the dinosaurs can be alive and then be dead when you kill them. Me: WELL THAT SOUNDS APPROPRIATE Me Again: hands Ike phone with "power rangers dinosaur" search loaded on Amazon because not 100% sure this is even a thing that exists Ike: starting to doubt who, exactly, he is writing this list for, the magic all-knowing present man or his incompetent mother Ike: My friend has one. It's awesome and shaped like a rectangle. Me: Very helpful details. But is it available for Amazon Prime. Ike: points to listing That's it! The Dinosaur Flitcher!... Read more →

Blow Us All Away

On Friday, the fifth graders at Noah's school presented a living "wax museum," where everybody dressed up as a historical figure and gave a brief biography report on their life when "activated" by a visitor. For long-time readers and Noah-understanders, let me preface that this assignment involved all of the following: 1) Wearing a costume 2) That included a hat 3) Actually pretending to actually be another person 4) Who could not be George Washington (because he already did a biography report on him last year and needed to branch out) 5) Reading/reciting lines in front of strangers 6) While in a large, loud, echo-y cafeteria while well over a hundred students were also doing the same thing for a huge crowd of family and friends. OBVIOUSLY, Noah went with Alexander Hamilton. (Two kids over in his row was a King George III whom he gamely and playfully referred to as "Mine Sworn Enemy" and challenged to a duel.) He tried very hard to memorize his speech but ultimately his nerves got the better of him so he was allowed to read it. He was also offered his noise-cancelling earmuffs but opted not to compromise the integrity of his costume.... Read more →

...And Then This Happened 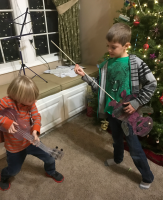 Why yes, that is Ezra using Owen the Penis Puppet like a guitar to play along to "Congratulations" from the Hamilton Mixtape while Ike thrashes around with a ukulele butchering the lyrics to "Iron Man" by Black Sabbath so honestly not much else to see here other than a typical Wednesday night for the Storch family, really. Read more → 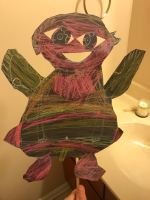 Ezra brought home a puppet he made in art yesterday. The kids created their own "Wild Thing" and then put on a class puppet show about the book. Ezra was pretty into the project. He told me his puppet's name is Owen. ... ....... ........... I don't think I'm going to ask any more questions about Owen. Read more → 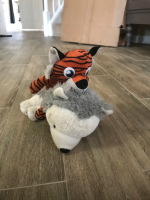 Not much to report on these days, as you probably surmised from the fact I recently wrote an entire post about a ladder in a box in our foyer. Which yes, is still there. Although this was also happening there this morning. Night after night I resist the overwhelming urge to pose The Damn Elf in compromising, dirty ways and then my kids are like, Hobbes is going to ride Jingle all day and I wonder how in the world I ended up being the only adolescent boy in the household. (FOR NOW. I SHALL ONE DAY TEACH THEM MY WAYS.) Noah has been invited to audition for our county's Gifted & Talented band, which was like whoa, what? Jason and I went full proud crazy stage parents for about 15 minutes but then Noah gave us a firm, "NOPE, not interested." We're obviously not going to push him (especially since he remained unmoved by several bribes involving trips to various important historical landmarks), but it's a touch frustrating. His natural musical talents are streets ahead of his INTEREST in his musical talents, and he definitely takes it all a bit for granted that it all comes so easy for... Read more → 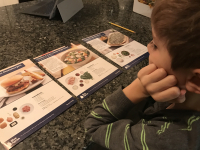 This post is sponsored by Blue Apron. Once upon a time, my children did not eat Green Stuff. Well, wait. Once upon a time, they all totally DID, back when everything was pureed and mashed up and I was the one holding the spoon and making airplane noises like an idiot. Only Ezra retained any affection for green vegetables past his babyhood, but even he typically preferred them in a whole or easily identifiable form. Otherwise, he regarded Green Stuff with the same amount of suspicion as his brothers. Green flecks of fresh basil in spaghetti? NOT SO FAST. A bit of spinach in scrambled eggs? SACRILEGE. Microscopic dots of broccoli in mac-and-cheese? YOU'VE RUINED EVERYTHING, MOTHER. Beige was the ruling acceptable color in our house, and while we always tried our hardest to keep dinner from revolving around toddler whims and general childhood pickiness, our successes with green vegetables remained pretty rare unless I was up to serious sneaky-cheffing to mask their presence completely. Plain green peas were generally acceptable to everybody, and eventually I could make tiny-but-visible bites of broccoli palatable to Noah in mini pot pies or macaroni and cheese. Ezra would eat steamed broccoli or fresh... Read more → 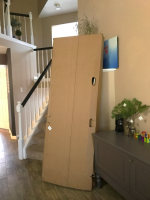 So this arrived a couple days ago. An early (and gigantic!) Christmas present from Jason's parents. It is a ladder. A proper, tall-enough ladder that will allow us to 1) paint some of the stupid-high walls and ceilings, 2) dust the ceiling fan blades, and 3) decorate the top of our Christmas trees without the use of a rake and Swiffer Duster extend-o handle thing. (That does not extend enough to dust the ceiling fan blades, ironically enough.) It is so fancy it comes with a whole DVD on how to use it. This is officially the most grown-up gift we have ever received. Or maybe the most obvious of hints to get our shit together. (Nahhhhhhhh.) But seriously, painting! Can possibly realistically happen! Goodbye beige and various beige-y shades of brown! Say hello to...oh God, hopefully not something that looks like a different color at first but then mostly comes out beige once it's on the whole wall. I should probably get the ladder out of the box and out of the foyer first, although y'all know our incredible track record on that sort of thing. And with that, #LADDERWATCH has officially commenced! Peace and blessings to your family... Read more →