Me: Okay Ike, it's time to write your Christmas list for Santa.

Ike: Yay! How do you spell Dinosaur Flitcher?

Ike: Dinosaur. Flitcher. That's what I want the most.

Me: Could you maybe describe it and does it have anything to do with Star Trek.

Ike: It flitches between dinosaurs that are alive and then are dead.

Me: You mean switches? A Dinosaur Switcher?

Ike: Yes. How do I spell that.

Me: Like...is it a flip book? A game or something?

Ike: Mom. It's a Power Rangers toy. It's made of dinosaurs and flitches around so the dinosaurs can be alive and then be dead when you kill them.

Me: WELL THAT SOUNDS APPROPRIATE

Me Again: hands Ike phone with "power rangers dinosaur" search loaded on Amazon because not 100% sure this is even a thing that exists

Ike: starting to doubt who, exactly, he is writing this list for, the magic all-knowing present man or his incompetent mother

Ike: My friend has one. It's awesome and shaped like a rectangle.

Me: Very helpful details. But is it available for Amazon Prime.

Ike: points to listing That's it! The Dinosaur Flitcher! That's what I want!

Me: "Dino Charge Megazord." Okay, sure.

Me After a Quick Google: So like, you don't even watch Power Rangers? And this is the first time you've ever mentioned them? Are you absolutely sure this is what you want because it doesn't seem like it's available anywhere and I sense a wild retail goose chase coming and I really hate that conceit in Christmas movies TBH.

AS83ROROAJL^&$(i@##% Me: spends the next four days trying to find one in stock anywhere, eventually turns to eBay, pays $10 premium +shipping on rectangle-shaped plastic thing that will promptly break or be forgotten like a good holiday sucker gah

Ike: I also want my own phone. 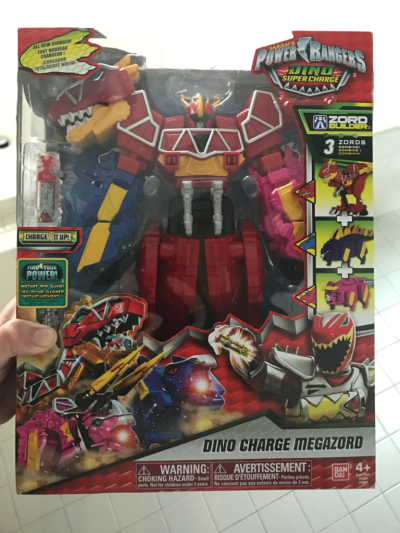 BOW TO ME THE ALMIGHTY DINOSAUR FLITCHER

Yes, we have all done it. The secret is to make them write the list early under the threat that Santa won't have enough time to make their presents :)

A few years ago I totally ordered a mint in box rancor monster from the 1980's off ebay for a small fortune because my son was sure that would be no problem for Santa whom he felt could time travel or easily have access to all the gifts in the world. Sure that seller would have loved seeing my child just destroy the box. :) Kid loved that flipping rancor though- still sits on a shelf in his room. Off the cry now so thanks for that. Have a wonderful Christmas Storches!!!

This was us with our then 3 year old, telling us he wanted pepperoni on a skateboard. WTF? He and his brother would read any and all printed media about boy stuff that came into the house until they fell apart, and as such, he had NO way to show us what the heck he was talking about.

For the next few months, he'd bring up how he wanted pepperoni on a skateboard. It was damn frustrating to not know what the hell he was talking about, my usually articulate child. Flash forward to a trip to Walt Disney World, we're in the Lego store in Downtown Disney and he starts freaking out with joy. He runs to one of the walls, pulls out a set and says "PEPPERONI!" It was a set that was set up X-games style. One of the minifigs came with a skateboard and had a pepperoni pizza on the 'shirt' body part.

Yes, we bought it. Yes, somewhere, nearly 15 years later, we still have that stupid Pepperoni and skateboard, along with about 15,976,204 other Lego and bionicle pieces...

I don't know as I wouldn't have just sprung for the phone! But whadda I know? I never birthed no babies!

My daughter wants a hatchable, but no way was I going to Black Friday for that. I'm hoping I can get one for her birthday in three months.

Ha, that's awesome. This year my two have decided they can't say what they want out loud because otherwise their wishes won't come true. Hopefully they wished for Legos.

We really do have it easy now compared to when we were little. I asked for a Cabbage Patch Kid when they were super popular, long before the internet and eBay. My mom tried to convince me that Santa may have to bring a homemade knock-off, but I told her that Santa wouldn't do that to me. Luckily my mom had really good friends that would always look even though they didn't have young kids. One day my mom got a phone call from her friend from the mall a few towns over (pay phone obviously). She had found 2 dolls. My mom promptly told her to buy both. Santa came through for us that year. Merry Christmas everyone!!

I has this Diosar fetcher...it's in pieces in the bottom of the closet. I'm sure my son played with it once since last year! But I've never seen it in true form since the package was opened!

We have the Filtcher! It's actually quite a beloved toy and does lots of switchy/transformy things.

What a great mom you are!!

Ha! I spent a week prepping my 3 year old daughter for her Santa visit so I'd know what she asked for. All week she was saying she wanted two microphones so she could sing with her cousin. Okay great no problem. Kid'so karaoke machine amazon primed.

We were waiting in line for Santa she all the sudden say "and a car"... Good thing my husband had already purchased a motorized car for her. So still good right?

We walk away from Santa and I confirm that she asked for her microphones and car and she says yes and a Violet Starr??? No idea what that is where it came from or what to do. I later found a purple stuffed star that lights up that she can have in bed that should help with her newfound fear of the dark.

As I'm patting myself on the back for that I overhear her telling my parents that she asked Santa for a new star for the top of the tree in her bedroom because the one that she has doesn't light up. Oops.

I figure, Santa is an old man who doesn't always have the best hearing and he could have misunderstood.

Well, my child wants a purple scooter. She is too old for any scooter that is all one color. I found a silver scooter with purple wheels and handlebars, only when I opened the box last night, it was actually blue. And, we live in Japan, so it's not like we can Amazon Prime it, or run down to Wal-mart, Target, whatever store. We're trying to figure out how to spin it. Stupid NEX, putting the wrong color in the box.

Yeah. My 11 yo announced today that he hoped Santa brings him lots of Nerf guns. :: looks at Nerf-less pile of gifts :: Since he's about 4 gifts shy of his sister, guess I'm heading to Target / TRU at 7am tomorrow......

Ha! This year my 7 y.o. told me all she wanted was beanie babies. I didn't like them the first time around in the nineties, and I'm not sure how this is happening. I had to hand people actual money for that shit.

Lol, about 2 years ago Nick asked for a specific star wars lego services that you cannot buy new anywhere. It was my first foray into ebay. I ended up winning TWO auctions. So one was from Santa, one from us. The acting job I pit on when I saw Santa had managed to actually get it for him too, and my apologizing for not believing he could and having gone through so much to buy it for him so that he wouldn't be disappointed... well that bought me another few years of belief. ;)

Not helpful to you at this point, but they had tons in stock at toys r us and walmart, even today. Bought it for my own similarly aged boy. $34.99. Amazon doesn't actually have everything...

My four year old also asked for the Flitcher except he knew what it was called. No idea how he knew it exists though, i thought he was making it up. (mean mommy did not buy it though. Maybe for his birthday in January.)

I miss the days where a toy was everything. Now my kids are 17 (18 in Jan), 21 and 23. The 23 year old lives in NYC and we bought him and his girlfriend plane tickets to spend Christmas with us in Hawaii - where we live. He's struggling financially - recent college grad, etc, so I know he could use $$ but damn, we spent $$$$ on the plane tickets, and are paying for everything while they are here. Then there is his 21 year old brother on a gap year from college - lives with us, just started a new job, so he needs grown-up work clothes. And the 17 year old got a plane ticket back to CA to visit her friends for the week after Christmas, and I couldn't keep that a secret from her because plans - we moved from CA to Hawaii in August. But the Santa Mom in me still loves presents under the tree, but 1 - how to balance the $, and 2 - how to continue our xmas tradition of opening gifts 1 by 1. This is the year to break with that, because it just doesn't even out when they've outgrown toys...

When I was a kid, my mom convinced me that the Sears Wishbook was published by Santa himself and to make sure Santa understood exactly what I wanted, I was to include page numbers of all the items on my list. She was freaking genius and I never suspected a thing.