A local brewery hosts a monthly dog- (and kid-) friendly pint night. We've been talking about taking Beau to one for ages now, always debating whether he'd like it or cower like a nervous stress-pee seizing wreck like poor old Ceiba. On the other hand: There is beer. And beer is good. Let's give it a try! 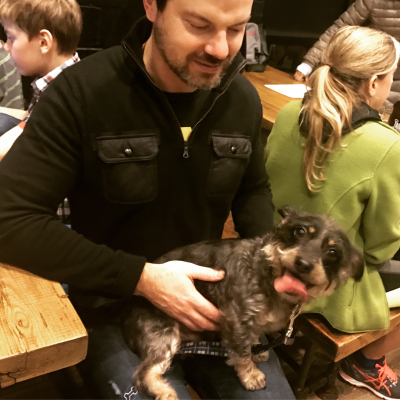 Look at that face.

(The dog's pretty cute too, I guess.)

The kids made a couple excited rounds to Pet! All! The Dogs!! (after getting permission from the owners, natch) and then settled down with food truck pizza and their holy blessed screens, while Beau kept one of us making laps around the room almost all night to happily sniff butts and...yeah. That was pretty much his jam. There was a looooooootttt of butt sniffing. 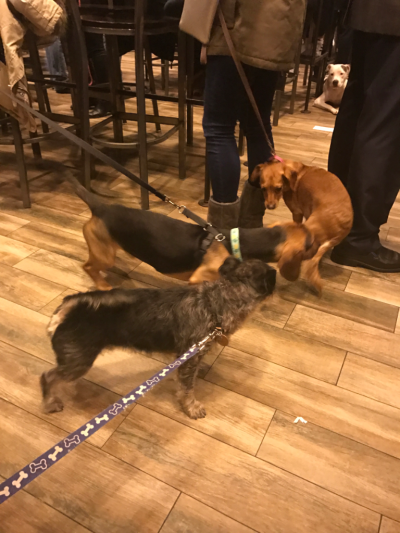 He was so happy! Lots of dogs and head pets and new laps to jump in! Let's do this every night!

And then Beau met the love of his life, a beautiful Golden Retriever therapy dog at the next table over. 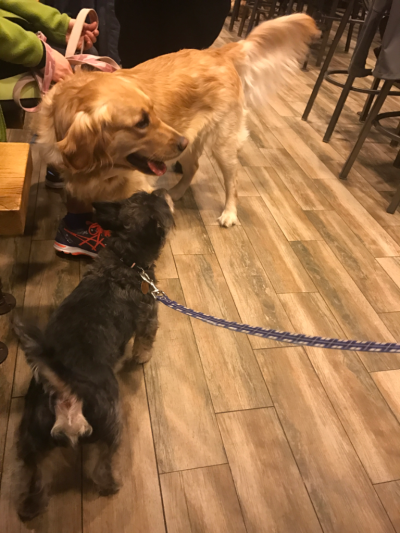 Beau's obsession with this dog was...intense. Playful tussling and tail wagging gave way to humping. And more humping. Never mind that they were both fixed, never mind that Beau wasn't even close to the proper...uh, area for that particular activity, he just had to be all up on her at all times. (She did not mind in the slightest, and according to her owners she is a bit of a serial humper herself, especially with her sister. YOU SO GROSS DOGS.) 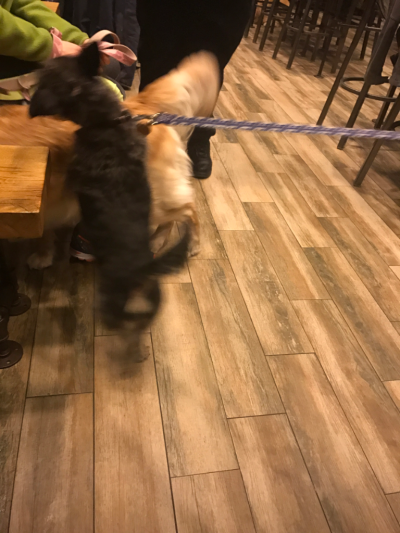 He started barking at other dogs who came near her, cried whenever she barked at something, and just about lost his shit when a coat fell off a nearby stool and startled her. BARK BARK BARK I WILL DEFEND YOU MY LADY! And then hump your face. 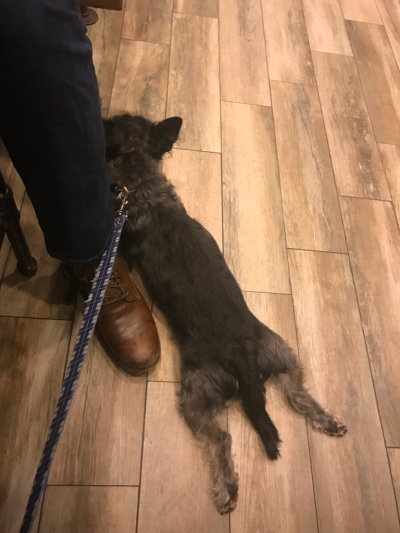 Above, a despondent Beau after I shortened the leash in order to give the poor other dog (and her people) a break from his overwhelming affections. 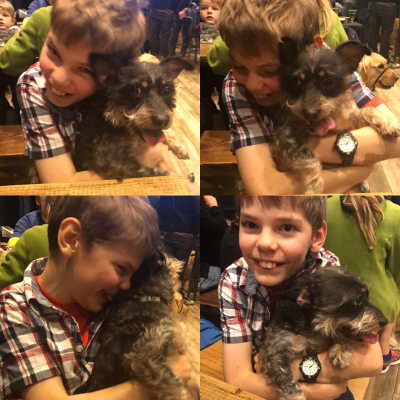 Eventually, the other dog left and Beau immediately calmed down, as his love clearly works on an "out of sight/out of mind" level (dick). But now I can't stop bugging Jason with the idea that maybe Beau needs an older/calmer/bigger sister dog to play with, an idea he is firmly against. For now. I've only had time to bring it up like 367 times so far. I'm betting around 500 he'll at least start to waver a little bit. 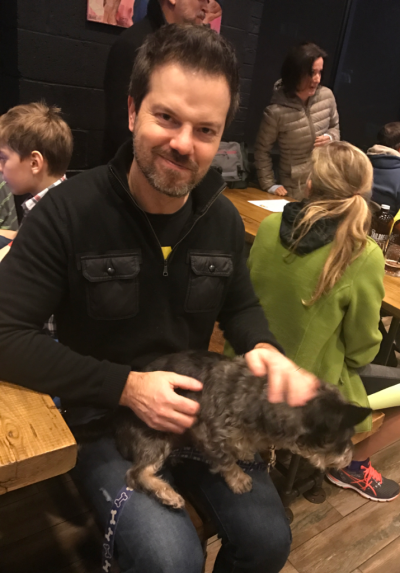 Two words. DOG.PARK. Find one and quick! Beau can run with other doggies and tire himself out. And he'll be thrilled.

We have 2 dogs (and 4 cats, and a rabbit, and some hermit crabs -- OK, we're sick.) Anyway, we have a huge german shepherd (we had him first) then we adopted a 10 pound female pomeranian. She is the boss!! I bet if you get a bigger dog I bet beau will be the boss too.

I'm glad to hear it's not just my dog that humps her sister. THAT WILL NOT WORK. Seriously. We all know you're in charge, just stop it.

We should plan a play date for Beau and Bailey. They sound so similar. (And us and the kids. Been too long). Also, so glad to learn jailbreak does this Bailey would love it!

The best thing we ever did for our dog was get him a sister! Our boy has never been into her in "that way", though; he always manages to find the oldest, slightly limping OTHER BOY DOG at the dog park to force himself upon. So our two exist solely as brother and sister, thankfully. But, really, having two dogs is AWESOME.

I've got a doggie day care only 2 miles away from my house that does half days for $10. I've already got a temperament test scheduled for my pup the day after he gets his final puppy shots. He loves playing with other dogs and I'm all about 6 hours of peace and a tired, cuddly puppy occasionally. Puppies are hard work!

The best thing we ever did for our first dog was to finally adopt a sister for her. Our pooch was 11 when we decided to try adding another to the family. She LOVED her sister. And she was very obviously happier (she was a grump from birth). Years later, we now have three greyhounds, and I wouldn't change any of it. I highly recommend adding another dog to your family. Assuming you can get Jason on board, that is.

So I'm now totally imagining that Beau hears Dreamweaver a la Wayne's World when he sees his blonde girlie.

Two dogs are way easier than one! They play together and keep each other entertained/company. Now I wouldn't recommend that you push it all the way to five like I have done, but DEFINITELY go for two!

Perhaps try dog sitting, with an extra dog at your house, like for a week when friends are on vacation and see what it is like before you commit.

Um, I think the real question here is: what did you drink?
I love breweries, and my kids love dogs, and frankly I'm glad that our favorite local brewery had to confine dogs to outside b/c they are just really not my thing. But beer is.

Dogs humping is their attempt to show dominance, not affection. My girl dog does it to our cats.

Longtime reader/lurker hopping on to second (third? Fifth? Whatever) dog parks! Our Labrador loves to play with friends (especially bigger dogs who can tussle the way his cat-siblings flatly refuse to do) but our living situation doesn't allow for another canine family member. Dog parks have been THE WAY for him to get his playtime and dog-time and OMGLETSRUNANDCHASEANDFETCHENMASSE-time. Bonus! Good way to meet other people in your area for future doggy playdates (or human hangouts).
That said, make sure you know the ordinances in your city around dog parks. Where I lived, city-area dog parks required a special off-leash permit, and they regularly sent officers out to the parks to do tag-checks for that permit. The suburban parks didn't have such a requirement, so until our off-leash tag came through, we drove the extra 20 minutes to the suburban park to avoid getting a fine. I don't know what regs your city may have around dog parks (if any) but they are worth checking beforehand, just in case.