It's cold and icy and blah out there, but I seem to have mostly recovered from whatever cold/sinus bullshit was going on last week. Or else I've just accepted that not being able to breathe through my nose super-comfortably is the way I live now, and probably will until spring, when the pollen comes along to fully suffocate me from inside my own face.

(Yes, I'm going to see an allergist for testing and shots and all that, but clearly I am not ready to let go of my gloomy pessimism and penchant for colorful language about the mucus situation.)

There's shockingly little to report from around here, honestly. The kids get up, go to school, and even the level of morning chaos is at an all-time low. Everybody takes care of their own shit, I float around the edges offering reminders about library books and lunch boxes, then tsk tsk after they've barreled out the front door because we still aren't 100% on clearing your own breakfast dishes or throwing away your banana peel.

Speaking of bananas, both real and figurative, Ezra had a playdate this weekend at a neighbor's house. I'm sorry to report that his long-time engagement to his girlfriend from first grade appears to be in real peril because now he says he's falling in love with this new girl, a girl who happened to make "getting to know Ezra Storch better" one of her New Years' resolutions at school, OMG, we're so doomed. Anyway, his new little lady friend's mom was very complimentary of his behavior, especially because he threw his banana peel away without having to be asked.

Kid is only eight and already working a strong "impress the parents" game. Wow. 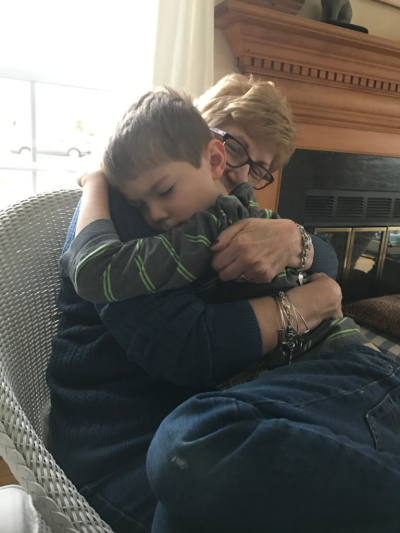 But not at all surprising from this little love bug. Sorry, girlfriend from first grade. You lost a real catch.

The Zah has a special place in my heart, he does. It's nice to be hidden in the Intertubes, because I don't have to hide that I play favorites

Ah yes the first breakup. I remember when my eldest nephew (now 20) was in the first grade and told me that he broke things off with his long time girlfriend from preschool. He told me, "I'm just too young to be tied down and I really think I should be playing the field, checking out all my options."

I mean, he wasn't wrong but what a douche. And yes, I told him that. To his face. Because that's allowed as an Aunt.

Wait. What? I thought Mighty Zah was gonna grow up and marry ME!

One of the things you wrote once that has really stuck with me since is that the "rule" in your home is that, if anyone needs a hug at any time for any reason, they are never denied or questioned. It seems small and probably a given for many families/couples, but to put it into definitive words? Special. <3

(And KImtoo: I make no bones about the fact that Noah is my Favorite Interwebz Boy Kid. Man, I'd love to sit down - or stand up, whatever works for him - and ask him bunches of questions about history and time travel and Star Wars/Star Trek and introduce him to the general concept of quantum physics. I think the latter would blow his smart mind.)

I'm interested to hear what your allergist says. My husband went through years of shots, and now does not even sneeze come spring-time. And he had severe asthma before allergy shots. Knowing this, I finally went to an allergist last year, did the testing (hello, huge co-payment against deductible) and found out I was allergic to--nothing. Except dust. But isn't everyone? I'm so, so bummed. Not that I particularly wanted to go through years of shots, but I wanted some relief from my constant congestion and feeling like crap all the time. So I'm still taking the decongestants and hoping against hope that this will all pass after menopause.
Anyway, I hope you are able to get better news. And Ezra is beyond adorabke. I love all your boys, but there's something about him that just grabs my heart.

@AmyA, no everyone is not allergic to dust, and when I treated my dust allergy (shots, meds, minimizing environmental dust especially in sleeping area), I went from constant sinus infections to person who can breathe. Highly recommend trying the treatment.

If allergies don't wind up being the answer, play with your diet. Nothing crazy, no cleanses or whatever, just see how you feel without dairy for a week. For example. I find I have the sinuses of doom when I eat dairy (except cheese, I still unapologetically eat cheese) and when I'm really pounding the gluten. Doesn't mean I can't have ice cream sometimes, just means I'm gonna have a stuffy nose after I do. Not the end of the world!