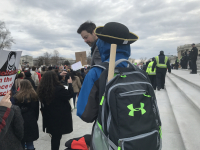 I was getting coffee yesterday morning with Lydia when Jason texted. There's a protest at the White House at 1 p.m. I want to go. Noah does too. "Welp. I better get home." I told her. "This is what life is like now, I guess." I got home, changed my shirt, refastened an assortment of buttons and a safety pin to my coat, and put on my ridiculous pink hat. The boys and Jason all changed into Hamilton-themed shirts, while Noah carefully packed up the Declaration, Constitution and Bill of Rights. He also chose a hat. The protest quickly moved from a rally at the White House into a march past Trump's hotel and to the Capitol building (something the Women's March ended up being simply too massive to attempt), so we joined in. For something that was somewhat hastily planned and Jason only spotted somewhat randomly on Facebook, the turnout was insane. The line of marchers -- once a again a wildly diverse, universally peaceful crowd -- went on and on as far as I could see in both directions. Ike took it all in with a bit of baffled wonder, while Ezra understood that we were marching against... Read more → 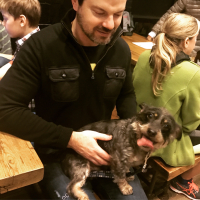 A local brewery hosts a monthly dog- (and kid-) friendly pint night. We've been talking about taking Beau to one for ages now, always debating whether he'd like it or cower like a nervous stress-pee seizing wreck like poor old Ceiba. On the other hand: There is beer. And beer is good. Let's give it a try! It's official: Beau is a dog who LOVES LOVES LOVES being around his doggy friends. Look at that face. (The dog's pretty cute too, I guess.) The kids made a couple excited rounds to Pet! All! The Dogs!! (after getting permission from the owners, natch) and then settled down with food truck pizza and their holy blessed screens, while Beau kept one of us making laps around the room almost all night to happily sniff butts and...yeah. That was pretty much his jam. There was a looooooootttt of butt sniffing. He was so happy! Lots of dogs and head pets and new laps to jump in! Let's do this every night! And then Beau met the love of his life, a beautiful Golden Retriever therapy dog at the next table over. Beau's obsession with this dog was...intense. Playful tussling and tail wagging gave... Read more →

The Kid Is Non-Stop 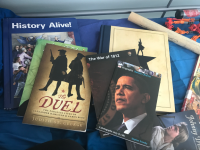 It's sheet-changin' day in the Storch household, and frankly, as the mother of three boy children, this isn't really the sort of stuff I expected to one day find hidden under their blankets and mattresses. (I always thought my off-limits-to-little-eyes Walking Dead compendiums would be the more popular targets for late-night stealing. Nope, it's my Hamilton book.) The only thing missing from this stash was his Bill of Rights, which he took to school today. They have a history test tomorrow and he could not be more excited about it. "It's going to be a blast! I'm going to get an A+!" I have no doubts that he will. Last night we finished the homework/chores/dinner gauntlet early enough that the boys technically had time to watch a movie instead of just a show before bed. Noah said thanks, but actually, he'd rather watch another installment of a George Washington TV miniseries from 1984 on YouTube. He also built his own Fort McHenry. I've promised him tours of the U.S. Capitol and the Supreme Court, as well as a repeat visit to the National Archives to see his best buds the Founding Documents again. And Williamsburg, again, please please please? We... Read more → 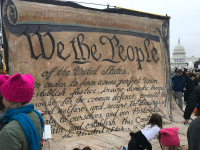 Very (very) early on Saturday morning, I -- like a million-plus other people -- woke up, steeled my nerves, donned a pink pussy hat, and boarded a bus in downtown Baltimore to join the Women's March on Washington. I went with my friends Lydia and Micaela (formerly known as Finn and Rey's former foster moms) and Lydia's mom (whose friend made us our hats, which were warm and cozy and hid whatever was going on with my hair that day, since I opted to completely skip anything beauty-makeup-vanity related in exchange for 10 more minutes of sleep). A series of rookie mistakes cost us over an hour's worth of waiting in lines -- I somehow missed the rule about backpacks and had to wait to check mine (technically Noah's and not one I was willing to abandon) for the day, and then we all were like "oh my God there are a whole three people waiting in line for the bathroom on the bus! no way man, what a hassle!" only to discover that the ENTIRE FEMALE POPULATION had descended on Union Station and lo, it also had to pee. Lydia took this one while we waited in line for... Read more → 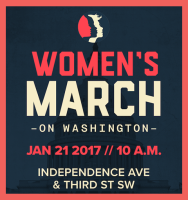 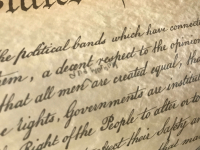 Noah decided to hold an impromptu Constitutional Convention at the dinner table last night. Among several proposed laws and amendments we discussed (Congress does not have the right to take away recess and also the Muslim ban/registry violates freedom of religion and is a terrible idea), he wanted to make some of his previously discussed changes to the Declaration of Independence a bit more permanent. ^and women >Slavery is also a bad thing and must be repealed Hereby signed and approved by Noah Storch, Ezra Storch and Ike Storch, thus fulfilling the requirement of a two-thirds majority in the Storch household to pass into law. (Or something. I don't know. Kid knows way, way more about how it all works now than me. But I do know his use of proper proofreading marks is giving me life.) Read more → 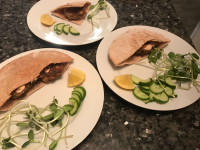 It's January 17, almost Let's Inaugurate a Lunatic Day, it's cold and grey outside, and I still haven't taken down our Christmas tree, which is dead. Time for a half-assed, hodgepodge post of random, mostly unrelated photos! I made this for dinner and lo, it was good. (We've been mixing it up and trying out a few of the other meal-delivery service options, so this was a Sunbasket recipe.) So good that the kids ate EVERY BITE, declared it their favorite, and then Ezra and Ike made me thank-you necklaces. Which I think went really well with an equally ridiculous dress. The men in my life give me weird things. I also made a lasagna. I was pretty darn proud of it (as evidenced by the multiple photos I took of it for no reason) and the kids ate it just fine, but alas, I was not showered in additional jewelry afterwards. Ingrates. Our weekend was on the touristy side...first Jason took Noah to Fort McHenry in Baltimore while I hosted a playdate for the other two at home.* He had more questions than the park staff were able to answer, but came home full of excitement, along with a... Read more → 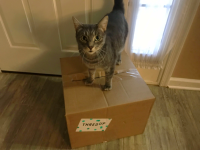 This post is sponsored by thredUP. I was folding Ike's laundry recently and came across some clothing that had...seen better days, to put it nicely. Shirts and pants with permanent stains, worn-out seams, holes started to emerge at the knees and elbows. All clothing that had been passed down to him; most of it previously worn by both of his older brothers. Hand-me-downs are a wonderful thing, but we're definitely stretching the limits of them at this point. Ike so rarely gets new clothing that's just for HIM, he gets irrationally excited over new pajamas or a cheap souvenir t-shirt. One morning he came bursting into my room to thank me for the new bag of socks I'd emptied into his drawer. Socks! New ones! Look Ma, no holes! Poor third child. Enter thredUP. I shopped at thredUP a lot back in the day when it was a parent-to-parent kids' clothing swap service. It's since evolved to a really amazing online consignment store, packed with both kids' and women's clothing -- along with a pretty big selection of high-end and designer brands. (Which always makes my clicking finger start to itch.) The kids’ section is GREAT because I can buy... Read more →

The very first item on Ezra's Christmas list was a "radio." Something that, once upon a time, would've been a pretty straightforward request. Except that I knew he probably didn't have the faintest clue what an actual, traditional "radio" is or does, and even I was like, "do they even...make those...anymore?" After asking him some leading questions, I was able to confirm that yes, the child who still sometimes tries to swipe left at magazines had some pretty unrealistic expectations about what his "radio" would do. He wants to listen to music in his room, but like, whatever music he wants, whenever he wants it. For free. MEANWHILE: Flashbacks to my very first radio/cassette player combo deck, where I would obsessively switch between two or three radio stations, hoping to catch a "good song," while keeping my fingers poised over the record button so I could BLAM, capture it on a sloppy cassette mixtape, also GOD would it kill the DJ to STOP TALKING YOU'RE RUINING MY JAM. (True Story: To this day, whenever I hear the opening bars of George Michael's Never Gonna Dance Again I mentally congratulate Bethany from Bensalem for scoring free concert tickets.) We have several... Read more → 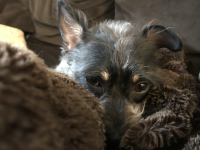 It's cold and icy and blah out there, but I seem to have mostly recovered from whatever cold/sinus bullshit was going on last week. Or else I've just accepted that not being able to breathe through my nose super-comfortably is the way I live now, and probably will until spring, when the pollen comes along to fully suffocate me from inside my own face. (Yes, I'm going to see an allergist for testing and shots and all that, but clearly I am not ready to let go of my gloomy pessimism and penchant for colorful language about the mucus situation.) There's shockingly little to report from around here, honestly. The kids get up, go to school, and even the level of morning chaos is at an all-time low. Everybody takes care of their own shit, I float around the edges offering reminders about library books and lunch boxes, then tsk tsk after they've barreled out the front door because we still aren't 100% on clearing your own breakfast dishes or throwing away your banana peel. Speaking of bananas, both real and figurative, Ezra had a playdate this weekend at a neighbor's house. I'm sorry to report that his long-time engagement... Read more →