Ezra lost a tooth over the weekend, obviously an exciting moment for him...but now that all three of them are in their peak tooth-losing years, it's become less of milestone for us and more of a endless mouth-based cash-sucking scam.

(I swear there was one week last month where Noah lost a molar at the dinner table almost every night. Which 1) wow, there's nothing quite like the sight of children passing around a bloody tooth stump to really help the appetite, and 2) HOW R U EVEN CHEWING, BRO.)

Long story short, Jason and I both completely forgot about the lost tooth and whiffed on the tooth fairy duties. I remembered approximately 0.32224 seconds after waking up and jumped out of bed, hoping to catch him sleeping in, but alas, they were already downstairs and poor Ezra was super, mega disappointed.

I went down and blathered some lame excuse about how he probably just lost the tooth too late to get added to her list for that night, blah blah she'll surely come tonight.

As soon as I walked out of the kitchen I heard Noah drop the truth bomb:

I pulled Noah out of the room and hissed at him, like DUDE, we had an arrangement about all this stuff! Why in the world would you say that to them?

NOAH: Because Ezra was so sad that the tooth fairy let him down!  I thought it would make him feel better to know it was just you and Dad! You know, like usual!

Wowwwwww. We are crushing this.

In other dubious parenting moments, Ezra and Ike later decided to make signs for the next protest we attend: 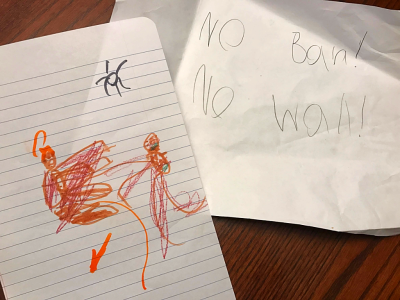 Ezra went with a simple, classic "No Ban! No Wall!" statement, while Ike's required a little explanation.

I'm not proud of this, per se. I'm certainly not encouraging this sort of thinking, and we've been trying to focus on the bad ideas vs. bad guys (although...yeah), and obviously it's a lot to be putting on a five year old in the first place...

On a sunny day. 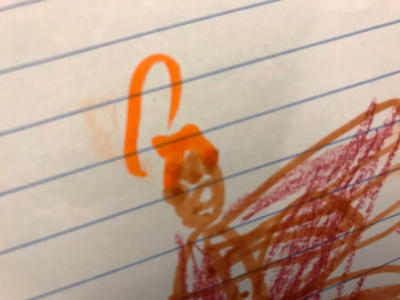 Awesome skill set you are passing on. Love how Noah's mind jumps to the defense of his brothers.

The hair flap in Ike's drawing is what makes it so awesome. You are doing a great job parenting, don't sweat it.

I fell asleep before I put out Christmas presents once. Feel better?

Oh 'like usual'!! One time my son snuggled close to me and whispered, 'mom, your hair smells like rotten eggs.' They are so truthful ... and there are compliments and kindness in all of this too (perhaps not in the hair smell). I really admire you.

Oh my god the hair flap. The hair flap is amazing and should be evidence that you are doing it exactly right.

(If it makes you feel better, my just-about-to-turn-four daughter's initial... introductions to our, uh, dear leader were made recently via pictures on the internet. I tried to stay neutral-ish and explained that I don't like his - or his buddy, Steve's - behavior. That they make bad decisions that I don't agree with and it makes me angry. Fast forward to a few days later: Mom, can you show me more pictures? More pictures of the bad guys? The guys you don't like their behavior? The guys who are mean to people because of their beleeeeffs? Wait. Do those guys live on our planet? Are they from Earth?)

Ike's picture just warmed my bitter heart, especially the clarification that it was a sunny day.

Only you and NPR can make me smile like I just did between the political and personal sh*tstorm I'm living. Thanks for being a light in the big bad dark, Amy 💜

I gave my kids a Kennedy half-dollar for every tooth lost. It was special enough that they always put it in their piggy bank and never tried to spend it (therefore mostly not realizing it was "only" 50 cents). I bought 2 rolls at the bank and they lasted most of their childhoods. Now my daughter gives her daughter Kennedy half-dollars for every tooth lost. Talk about defeating inflation!

You are totally crushing it, look at those posters!!! CAPTAIN AMERICA DEFEATING DONALD TRUMP ON A SUNNY DAY!!!

And ugh! THE TOOTH FAIRY. I only had the one kid and I totally missed some nights.

In France, the tooth fairy is a mouse. Whenever I forget to put money under the pillow(has happened way too often), I tell them maybe it was scared of the cats. Then I distract them with some silly task like seeing if the cats are out/sleeping, I hurry upstairs to put money and go down and say that perhaps the mouse has been there if the cats aren't upstairs anymore. Works. We have also written notes to the tooth mouse when we have lost the tooth (or swallowed it), and it can read!

My parents had my brother and I convinced that you didn't leave teeth under your pillow, you left it in a glass of water on top of the TV overnight. In the morning, there would be money in the glass instead of the tooth.

My daughter wanted us to vote for Clinton, because she's a girl. I explained that we don't vote for people based on that, we voted base on actions and beliefs and experience. Trying very hard to do the "he's our President so we need to support him" thing (my husband is in the military, Trump is his boss). We pray that he'll make wise decisions (she asked if the prayers were working, I had to tell her not yet.). She saw me reading an article about Trump and asked what it was about (I think it was DeVos, and may I add I'm so glad we homeschool), and when I told her she replied, "Typical Trump!"

Well, I'm not sure what this says about my parenting, but my 7yo daughter was looking over my shoulder as I read this, and when she saw Ike's picture, she said, "Oh look! It's a chicken and a butt!" I died.

Bad ideas rather than bad guys: that's a good idea--one that we have not been using. We ended up talking to my son about Steve Bannon the other day, and I said that he was "a baddy" like the bad guys in Ninjago and in his superhero games. He said "Oh, like Donald Trump?" We should maybe be a little more thoughtful about how we talk about politics in front of the kids.

But the worst (best?) part of the story was that we started talking about Steve Bannon when I scrolled past a picture of him on my laptop and my son was sitting next to me and said "Look, it's Grandpa!". I am never telling my dad this.

I have half-heartedly tried to shield my 5 and 7 year olds from the evils of the current administration, but it's hard when I literally start screaming every time I hear his voice or read an article or listen to the news in the car or turn on the TV and see his Cheeto face or......