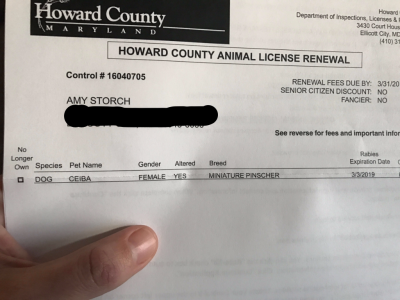 A friendly reminder that it's time to renew Ceiba's animal license! Right on the one-year anniversary of her wild adventure of wandering two whole lawns over, then getting herself carted to the shelter, where I first paid for the license (and a fine for not having the license in the first place whooooops), and also got the news that oh yeah ur dog is peeing blood now, might wanna get that checked out. At least she lived out her final couple weeks as a fully legal dog, although perhaps under the new administration the citation for being off leash on her record would qualify her for dog criminal deportation.

Either way, love my option here for explaining why I'm not paying for this anymore: 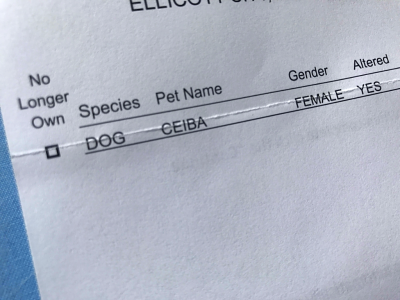 THAT'S ONE WAY OF PUTTING IT I GUESS.

I still vividly remember the panicked, clammy, heartsick feeling I had that entire night, and the CRUSHING GUILT that it was all our fault -- the gate/no collar/no microchip/the letting-the-dog-out-and-just-plain-not-noticing-she-wasn't-let-back-in. My brain kept circling back to the possibility of "that's it, this is it, she's gone and something terrible is going to happen and you'll never know what happened, but ohhhhhh Imma spend the rest of our lives being intrusive as FUCK about all the DIFFERENT something terribles that could have happened to her."

Fun fact: We were about mid-way through the movie Room when we realized she was missing. We never finished it, and every time it comes up as a Netflix recommendation I have flashbacks to that night and have to scroll past it super quickly. Like, "Oh noooo, I couldn't POSSIBLY watch that movie about a horrible kidnapping and years of repeated sexual assault because it reminds me about the time my DOG RAN AWAY." Even for me, that's pretty damn weird, right?

Damn, I miss that little asshole. But I'm still so glad we got her home safe after that night, even for just a little while longer.

*Yeah, r key is still doing that thing, although the extra rrrrr's in worrst were intentional, and I got double the r's for half the keystrokes. That's just a productivity booster there, folks.

Your movie thing isn't that weird - or at least you're not alone. The day before my mother died, I had people come to the house to blow insulation into my walls. I asked them to not come inside to do the attic without someone there, because I had cats. They didn't listen, and came in and did the insulation when I was at work. That night I was watching "The Devil's Advocate" with Al Pacino, when I looked around and realized I hadn't seen my cat in a while. I searched around and finally found her - insulated INTO THE WALL OF MY ATTIC. I had to get my brother-in-law to come over and get her out for me, and in the middle of the night my mom died. I have never seen the end of that stinking movie, and I move right by it any time I find it on TV. *shudder* (And this was almost 17 years ago, by the way, but I still can't watch that movie because it makes me think of that horrible night, and the horrible day that followed.) (Oh, and the cat was fine - just a little freaked out, for obvious reasons.)

Not as traumatic as Denise's experience or your own, but I tried to escape the anxiety of election night by fleeing to the movies, figuring it would all be over by the time I got out. And by the time I did get out, the world had exploded. So while it was nice that Moonlight got the Oscar, I will never, ever be able to think of that movie without remembering how I felt when I turned on my phone as I exited the theater and saw my son's text: "Oh my God, what is happening????"

It's amazing how our minds work, and how we can be triggered by a movie. I still have never finished Shanghai Knights, because during that film, my phone rang, and my now ex-husband answered it with a, "I told you never to call here", and found out what a cheating slimebag he is. And every movie he told me he watched that I realized were watched with her, have never been watched by me. So yeah. Perfectly normal.

I used to be addicted to this one decorating show on HGTV. I was in the middle of it when I looked out the front door to see my cat run over in the street. (I had let her outside 10 minutes previously) I could never watch that show again. Not ever.

Hang in there- after about the 2 year mark the piercing pain from losing a pet fades and you can remember the good times with them without the accompying ache of loss all the time.

My dog died a few weeks before yours, and every few months I get an email from the microchip company reminding me that it's past time to renew. I can't bring myself to tell them that he's long gone at this point. So I'm with you. Very much.

I got a call from our grooming salon yesterday to see if we needed anything since our dog hasn't been in in a while. I had to call them back and tell them he died in November. :( I feel like they probably won't make that mistake again (at least not with me), unlike my previous vet who I swear still sends me vaccine reminders for our cat that died almost 5 years ago, and after the first two I called each time to have them update their records, then I just gave up.

I have the same movie-aversion-due-to-a-bad-experience-syndrome as many of you do, except it was Saving Private Ryan and my parents getting into a huge fight when I was in high school, throwing dishes and whatnot, in front of my friend. It was the first time anyone had ever witnessed how scary my dad really was, and I was so embarrassed. Never finished the movie, still don't know what happens to Matt Damon, though the friend and I are still close all these years later. Brains are incredible, aren't they? Sending some peace and light to you, Amy, and all of you commenters who may need it!

Hugs for all of you.

Initially I have done some of them. I really appreciate your thought.CARE NOT, MORTAL.

Wait a minute... Three of them? Crap that means two more people that have probably been murdered by some new thing soon to come.

It would be freakin' hillarious if she takes him to a warehouse full of encyclopedias :)

Great Tutorial! I'm sure you understand, sometimes you get into a rut where nothing works and everything looks awful. This design was fantastic and opened my eyes to trying something different and unique. The techniques you described were simple to implement but extremely effective and creative. Great job! I really loved it!!

I'm with you on the movie thing. I was watching Bridget Jones' Baby when my boyfriend left for the evening and later passed away. It was the last normal thing I did before I got the news. Safe to say, I will never watch that movie again and seeing as it's a "third movie in a series" kind of situation, here's hoping I don't run into it very often in the future. And here's hoping Room disappears for you as well.... I mean, it's not exactly a cheery movie anyway, so would we really miss it?

I'm totally with you too...when a loved one is ill or something else really crappy is going on, I actually think about what I'm going to read or watch on TV at that time in case the worst happens and the book/show is forever tied to the terrible thing.

My movie avoidance is "The Expendables". Watched it with my ex-husband the night he, out of the blue, told me he was leaving. Can't stand to see it pop up in the Netflix menu or watch any of the sequels. This is five years and a new husband and baby later. Over the ex, but still can't watch the movie.

This isn't totally the same but also involves a deceased pet. My photo of my dog was chosen to be the cover of a rescue organization calendar. It was fall of 2015, the day before we were leaving on vacation to the beach, which I knew would be her last trip with us....she was 14 and had very bad hip dysplasia and I was basically carting her around with a scarf slung under her back legs to help her. The rescue place called to tell me that my photo I submitted was chosen to be the cover. It was bittersweet because I was already thinking she would be the cover girl on a calendar for a year when she was no longer alive. We had her put down around Thanksgiving. Calendar comes in Late December for 2016.....there is my sweet dog......WITH SOMEONE ELSE"S NAME AND TOWN AS THE OWNER!!!!! WTF CHARITY???? YOU EVEN CALLED TO GO OVER THE INFO TO MAKE SURE IT WAS RIGHT!!!! Of course I kept the calendar and every time I see it, I feel a mix of sweet sadness and bitter rage.

Part of me was paranoid that other people saw it, knew it was my dog, and then saw a different owner's name and thought I unloaded an elderly dog at the end of her life on someone else.

I had this kitten that I named Lily Potter that I'd gotten from our friends who have a farm. I took her in to the vet to get spayed as we do. Later that day they called to tell me that she died during surgery because she'd had a pre-existing hole in her diaphragm from some previous injury no one knew about. A few months later we got a card from the SAME VET telling us she needed her shots updated. I was a mess but I made sure they updated their records...