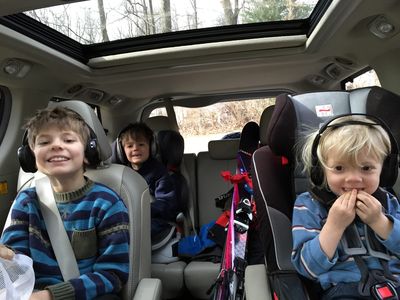 By the time you read this, I will be visiting family in Killington, VT, having (hopefully) survived a seven-hour road trip with my children...and (even more hopefully) with my sanity intact.

I'm not worried about the kids, by the way. The secret to traveling with kids is actually pretty simple:

1) Get a car with a DVD player in it. Procure many DVDs.

And that's it. You're pretty much done. I mean, you'll also want some headphones for them, snacks and drinks but not too many drinks, because then you'll have a kid who needs to pee exactly five minutes after you leave the rest stop where he refused to even get out of the car (but I didn't have to go then!!!) and yet it's already at EMERGENCY LEVELS and then something unspeakable happens in an empty water bottle but hey that's an unexpected perk of having boys I guess.

So my kids will happily spend all seven hours watching movie after movie while I slowly die of boredom in the front seat.

Jason is a...bit of a control freak when it comes to driving so we actually rarely swap posts. (He admits he's a terrible passenger, no matter who else is driving.) So he drives and I sit. I do not sleep, because once upon a time, while we were still dating, we agreed that was rude for whoever was driving and it's the passenger's responsibility to make sure the driver is staying awake/awake and has someone to talk to. This is a regretful rule, I admit, especially when we travel with other couples and I watch the passenger snuggle up with a pillow and promptly pass out. Like, you’re allowed to do that? Wow.

(Don't make road trip rules with your boyfriend when you're 19 years old, babies. Nineteen years later you may realize you could really use a nap.) 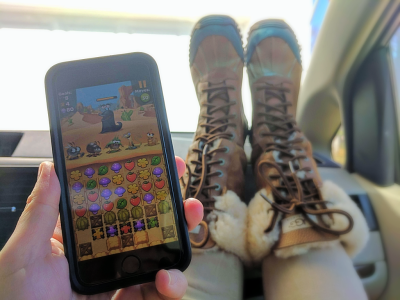 I can't read in the car without getting carsick, so I am super ridiculously dependent on gaming apps for my road trip entertainment. And on THIS trip, which takes us through the winding wilderness of No Wifi and Really Crap Signals, I need games that work without either. So I was delighted to discover the puzzle game Best Fiends, which I started playing a little over a week ago. I am hooked. It's one of those diabolical little games that starts off easy, then suddenly you realize there's like, STRATEGY and THINKING involved and you need to plan your moves better. (Hint: connecting the largest chain on the board isn’t always the best default choice, but good luck overcoming the temptation to go for SLUGMAGEDDON every chance you get.) And then you're like YOU WILL NOT BEAT ME GAME, I IS SMART AND GOOD AT THINGS.

I'm currently on level 64. Do I have a problem? No, I am just awesome at this game, obviously. You should come play too and try to beat me, which you won't. Or maybe you will because level 64 is not messing around. Either way, come play and we can send each other presents while locked in any of the constant in-game challenges in the battle for Minutia world domination. 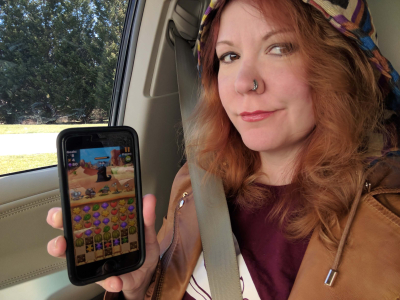 Thanks to Best Fiends for sponsoring this post AND for keeping me happily entertained and majorly procrastinating. First 100 readers to download the (FREE!) game and get to level 10 will get $4.99 worth of gold and diamonds for free, just follow this link to download! Available for iPhone/iPad, Android, Facebook, and Amazon.

My mom used to carry an empty Downey bottle for my brother. Covers the smell! Have fun!

Shame, Shame on you I am now addicted to that game.

I'm impressed that you have 3 working headphones! We started with 4 and are now down to 2 and 1 of them has already been glued back together once!

We listen to audio books (from library and FREE) on road trips. Download to phone and either plug in headphones or connect to car audio. However, I will have to check out this game.

I don't understand this game.

Ditto on the car trip rule when dating. 24 years later it's still holding strong, sadly. My husband gets car sick so he always drives ( he's also a control freak, so there's that). We drive twice a year to MA to visit my family. I am ready to dive out of the car when we get there. The kids watch movies and TV shows. A couple of years ago we bought a device (media share is the app, you'd prbalay know more than me) and put the app on the kids iPads. My husband puts shows and movies on a thumb drive (?) and the kids can access them via the app. Now they can watch different things. And fight when my youngest watches the same show as his older brother because "why does he always have to copy me". Then I laugh and roll my eyes.

I sleep and play games and read or do whatever. Our rule is if he needs help or conversation or navigation, I stop playing. The unspoken rule is that he does not wake me up except for emergencies because grrrrrrrr - it is not pretty. OTOH, on trips by ourselves, we can talk for hours. It's harder sometimes with the kids, who are at the what are you talking about? What's so funny? stage.
I keep meaning to try audiobooks, but I have no trouble reading in cars, so generally I do readalouds on long trips. Terry Pratchett's Tiffany series has been a huge hit, because then I can do my dreadful Scottish accent and the kids can yell "Crivens!" at every opportunity and it's funny enough that even the grump in the drivers seat laughs.

KImtoo: Your whole entire comment made me very happy; I cannot pinpoint exactly why, though. Lovely end to my day. <3

We've found that empty McDonald's milk bottles are the perfect size for little boys to pee into, with a helpful wider mouth than water bottles. The trick is to remember to empty the bottles....

After my grandfather died and we were cleaning out his house, we found an old apple juice bottle in the garage marked "tinkle" in black marker. He saved everything and was not a surprise that he would bring a bottle full of 'tinkle' back home to empty out and reuse.

I also refuse to sleep or let anyone sleep while on a car trip. You just never know. The only time I did sleep on a car trip I woke up on the side of 95 just over the line in South Carolina at 5 in the morning because my dumb boyfriend at the time ran out of gas. Never again.

My husband and I have a similar deal about driving. He prefers to drive and I prefer to stay awake because I feel like it's rude otherwise. However, I am also super anxiety-ridden about riding in cars (involved in too many accidents as a kid.) So I can't watch the road or I become The World's Worst Passenger Seat Driver. Downloadable Netflix girl, get on it.
Also, even though this is no longer relevant and I missed the comments being open on the post about Five Nights At Freddy's your kids probably know about it the same way my kid does - Roblox and various YouTubers who reference it during other game play.

My husband almost always drives too, which suits me just fine because I can get in so much knitting and game playing time on road trips! I do try really hard to stay awake for his benefit, but sometimes it's just impossible. He's known to drive from ME to PA in 12 hours straight, and that takes superhuman levels of alertness that I can't even imagine.