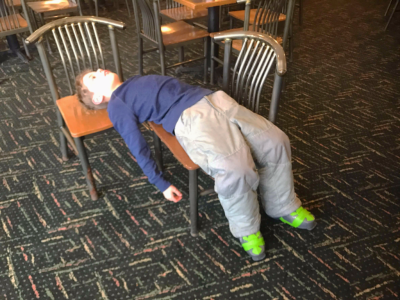 We survived, both the drive and the trip itself.

Post-road-trip/mini-vacation crash aside, today is kind of a rough day over here. So forgive the lazy mass posting of photos without much storytelling. 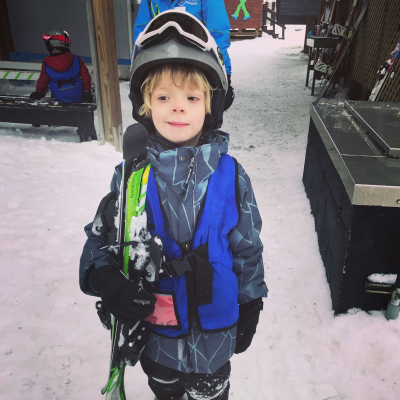 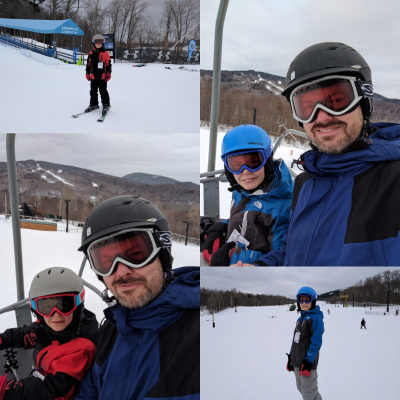 (NOT PICTURED: AMALAH, THE GIANT CHICKEN GIRL WHO DOES NOT ROLL WITH THIS SKIING NONSENSE.) 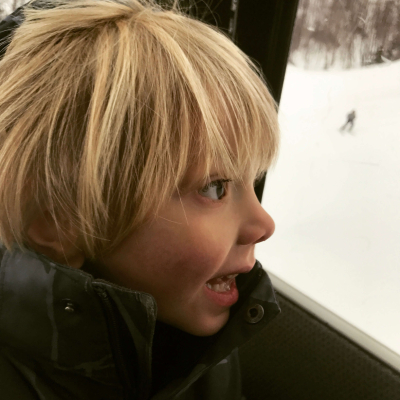 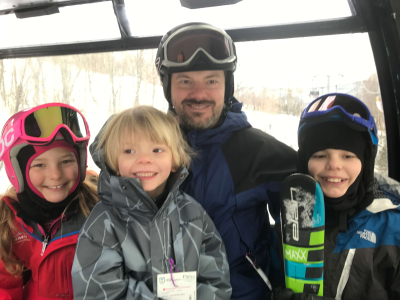 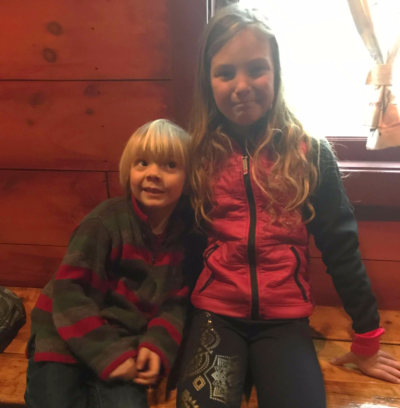 (She made him a pom pom puppy, now known as Ike's Most Treasured Possession.) 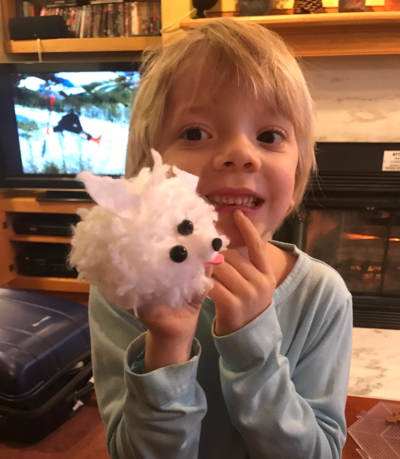 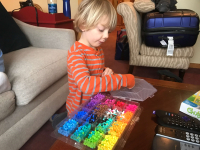 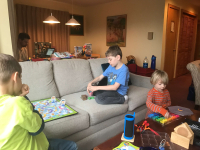 What is it with vacation homes that suddenly make board games so attractive, by the way? We have a huge stack of dusty games that no one ever wants to play, that get taken out maybe once a year just long enough for an essential piece or two to go missing. But whenever we go on a trip it's like the goddamn National Chutes & Ladders Tournament and Operation Invitational. It's so old-fashionedly wholesome. 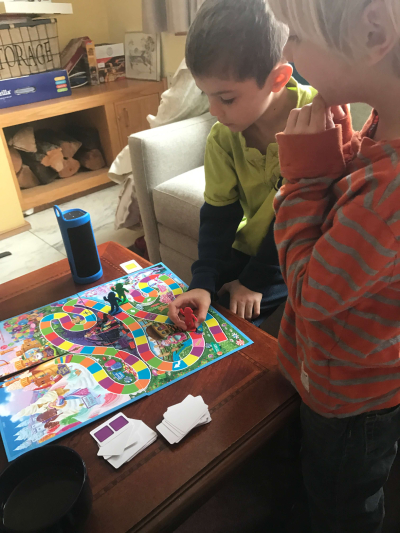 (Ike cheats at Candyland something terrible, though.) 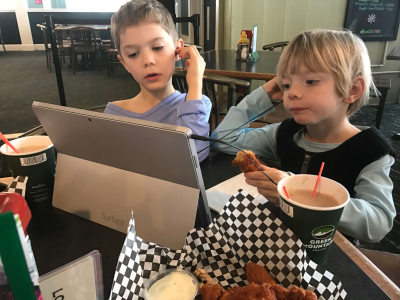 Post-skiing entertainment at the lodge was a bit more their usual speed. Netflix cartoons, hot chocolate and chicken wings. 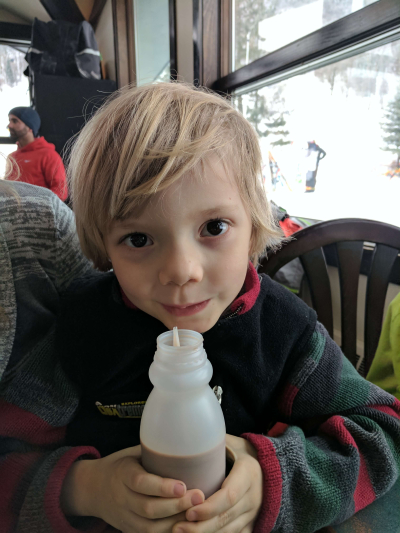 "I did awesome at skeeting. My favorite part was when I fell in the snow on my belly." 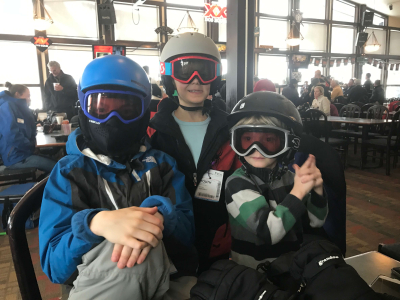 Ezra spent the weekend bargaining with us over what it would take to get his own set of skis instead of using rentals. Jason picked a trail and told him if he could get down it without help (along with some turning and a proper stop at the end), we'd buy him some skis for next season. 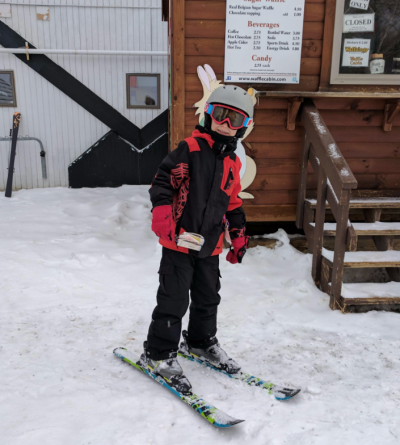 (Guess who's getting his own skis next season.) Noah also had a amazing time. His last ski outing ended in "disaster" (his words; he fell a couple times and got super frustrated) and we weren't even sure we'd get him out there beyond a lesson or two. He really clicked with his instructor this time, though, and it made a huge difference. By our last day, he was asking to ski all the way down from Killington Peak. We decided against it since conditions were pretty icy and rough, but still! That's some mountain-high self-confidence right there, and I'll take it. 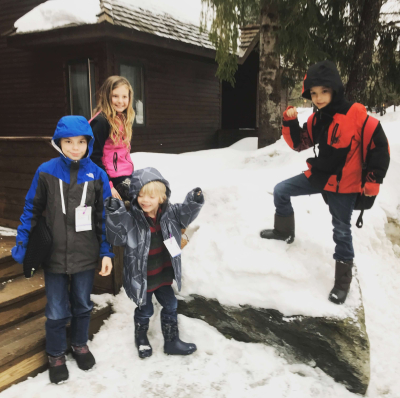 It was a great trip. Although I am damn ready for the beach.

Doug and Michael go skiing all the time. I go to the spa. We just got back from a trip to snowshoe, they loved it, the spa was very nice.

Looks like a great time! :) Sending hugs and hope you're doing okay. <3

Definite family likeness with that cousin! A real similarity to Noah right?!

Glad nobody broke any limbs.
Thinking of you and the relationship you had with your dad. Not unlike mine with my dad who will be gone 28 years in May. Damn, that's a long time.

Oh man. I grew up skiing, raced and taught until I was 25, quit for awhile while we lived in DC (and it was like quitting smack; I'd wake up in suburban Maryland at 3 AM from a skiing dream and think godDAMMIT I need to get out on the hill, why I do I live here) and picked it back up with ski club at my husband's school, coaching and teaching. Until this year when I fell down six months ago and broke my ankle. I mean I broke the shit out of it--three separate breaks and a dislocation, followed by surgery and screws and plates and rehab. I asked my trauma surgeon if I was done skiing, and he looked uneasy and smiled sadly and patted me on the cast, and said "I don't know what to say to you. You should see your face right now." Then I cried for three months because I knew my kids would never have this, no matter how hard I pushed for it.

I love your adorable family, I'm with you on the not skiing part - they can have it and I can have some peace and quiet. :-D
My husbands grandfather (whom we were very, very close with) passed the same day your dad did. I remember reading your post earlier in the day and I was so sad for you, a few hours later we got the call that he had had a heart attack and it didn't occur to me until much later that it was the same day. Every year I pray for you guys, I couldn't not.
I have been reading your blog since before Noah was born. I also have three boys, I struggled with infertility and your pregnancy journal was there with me through two pregnancies. So even though you don't know me, I feel like I've known you forever.

I empathize with you over those days and moments that bring the pain to the surface. My dad lost his battle with cancer a little over 2 years ago. Today a man came into tmy office wearing the same aftershave Dad wore. It was hard to hold it together.