Home Archives About Subscribe Advice Smackdown Tip Jar
Dress for Success, or Merely Survival
There Was An Old Woman Who Just Wanted To Make Coffee But This Happened Instead

Another reason to perma-love this time of year: It's pet adoption anniversary season!! 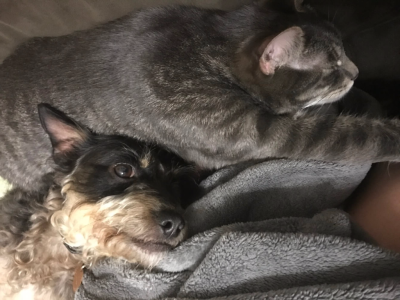 AKA any excuse to spoil the animals while also eating human cake.

Beau's officially been with us for just over a year now, and now that he's fully settled in I swear he's pretty much the dictionary definition of A Good Boy. "Who is a good boy?" I ask Google. "Beau is a good boy," says the search results. (While Alexa chimes in her agreement from across the room.)

I still sometimes wish we had more solid information about his life before us, although when I think about some of the behaviors he had initially I realize it was all probably pretty damn bleak and we're better off not knowing the details.

(Besides his HASHTAGRUNNING and defensiveness around food and sleeping children, we also had to carefully ration his water. If he saw a full water dish he would desperately and rapidly drink every drop, and then promptly throw it all back up. He wasn't used to having enough water. I'm so sorry, little doggo. That will never happen to you again.)

(He's fine with his water dish now, and doesn't have an aggressive or nippy bone in his adorable floofy body.)

He still occasionally and accidentally gets outside from time to time, but rather than it resulting in a panicked chase we now just go check the front door instead. He'll already be waiting for us there 99% of the time, like "sorry I saw a squirrel but I did not catch the squirrel so I would like to come back to where I am not required to chase my food also I am A Good Boy."

The cats' adoption anniversary is still a couple weeks off, but likewise have settled in so, so well since their confusing first few days of 'round-the-clock hiding and FALLING OUT OF DAMN WINDOWS.

Not that they don't regularly inspire heart attacks and/or OH YEAH CAT GO ON I DARE YOU moments: 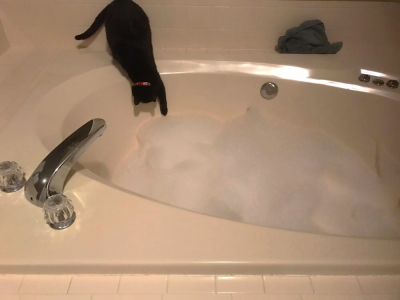 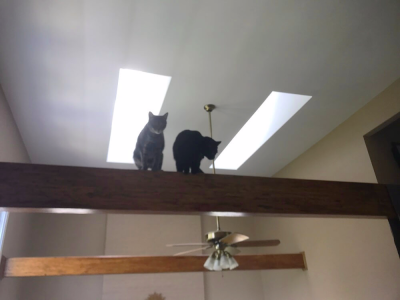 Here is where I'm going to say things that sound terribly mean, but are coming from a place of genuine, unconditional affection: My cats are idiots. Beautiful, hilarious idiots, but just very...kitten-brained, despite being over two years old.

Finn is probably the smarter of the two, but that's honestly like comparing the intelligence of a vacuum cleaner vs. a potato. Rey squeaks in panicked confusion every time you pick her up, then immediately starts purring like oh ok remember this now this not terrible ok ok. Finn is fine with being picked up, but then wants to scale your body to the highest vantage point and ends up falling ass-over-teakettle off your shoulder. EVERY TIME.

And while Finn is definitely the Helper Cat to Rey's more baffled-by-how-life-in-general-works Simple Cat (he'll come meow endlessly at us when he can't find her, because she once again got her ass stuck somewhere), Beau is overall the brains of the operation and is routinely cutting them off from being stupid.

YAP YAP GET AWAY FROM THE TOILET BEFORE U FALL IN. AGAIN.

I've watched him grab hold of a paper shopping bag and start furiously shaking it, then realized a cat has its head and front leg stuck through the handles. Whether he's genuinely attempting to help vs. YAY CAT MURDER IS A FUN GAME I can't say for certain. But overall he's been excellent at alerting us when the Idiot Twins are being idiots. Again.

But they are sweet and super affectionate (although I am clearly Rey's favorite human in the house so I get the most snuggles and lap time with her) and all three pets like to curl up around me while I work during the day and keep me company. It is nice. We have nice pets. A+ work on being nice pets, pets. You are all welcome to stay here forever.

And of course, there's this, which I could listen to on a loop all day:

Happy Petiversary to your entire crew! They fit in perfectly.

And yes I had a pointer that was a fantastic dog but SO fucking dumb I am not sure how he actually functioned enough to remember to breathe sometimes. He loved us though and when my son was born Batman (pointers name) would point the baby every time he made even a passing noise.

I had a college roommate with a black cat that would make that noise every time someone lifted a dart to throw at the dartboard. Which was a lot.

Happy Pettiversary to you and the fur babies !
The Beau story of his water made my heart ache - I have the sweetest little yorkie ever who I adopted almost 6 years ago. She still is a food hoarder, hiding bits of kibble everywhere. Her vet claims she knew real true hunger and in her mind is determined to not be hungry again. Like you, I don't wish to know her back story, and once a week or so I quietly gather up the wee piles of kibble.
Thank you so much for rescuing !

Sweet fur kids stories. My almost 19 year old Maine Coon, Savannah sleeps a LOT. Except for the middle of the night when she yowls at the top of her lungs when she can't find us. Because we are sleeping in the same bed in the same bedroom we have slept in since we brought her home when she and her now at the Rainbow Bridge brother, Orleans home when they were 12 weeks old. Yeah, I get the Idiots story!

After fostering bunches of dogs (dogs for which I know their history so I can connect it to behavior), it makes me rethink the behaviors that my dogs had when I first got them. My oscar who doesn't even come close to bolting for the door now was totally a door dasher and when I'd chase him he'd hunker under a park bench and snap at me. He never snaps at me now, even when I have to do unpleasant medical kind of stuff to him. My Cody was a water hoarder too and he also is a thing hoarder; picking up and holding anything I drop. I always tell people, the dog I'm giving you is but a shadow of the great dog that he'll be in a month or two.

Now you are making me cry again :-( We had to put down my best pal 2 weeks ago who was a rescue dog too. He often misbehaved and got into all sorts of trouble but for the 13yrs + that he was with us he loved us just as much as we loved him and I just miss him terribly :-(((

Love this post, Amy. It's funny, sweet, and so real.

I have two cats. One hates me and truly believes I am my husband's side-chick - even though *I* adopted her. The other was a rescued stray from the South Side of Chicago. I don't know if he ate a bunch of lead or what, but he is truly the dumbest pet I have ever had - and he's completely untrainable. We've had him for 10 years and still, despite ALL OF OUR EFFORTS (and there have been many), he 1) jumps on the table, 2) falls in the toilet, 3) chases the other cat, 4) walks around the house at 4 am "hello"-ing for us when he just left our bedroom, and 5) escapes the house ... all of these occur almost daily. Despite their often annoying behaviors, my kids love them and they do give us snuggles. It makes me feel guilty for my attitude problem.