By the time I woke up on Sunday morning, it was technically almost not-morning anymore and Jason had been up for hours. He'd already made a run to the hardware and gardening stores, done a bunch of yardwork, re-potted or transplanted dozens of seedlings and plants, and also brought this disaster waiting to happen into our lives: 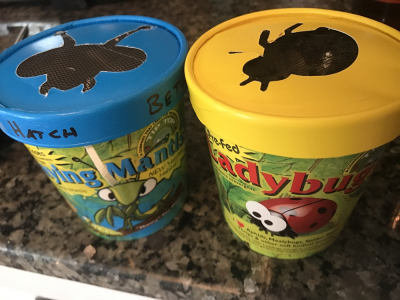 So industrious, that husband of mine.

It was almost exactly 48 hours later, as I stood in the kitchen in my pajamas this morning, blearily making coffee, when the ladybugs -- first moved precipitously towards the counter's edge by Noah to make room for the toaster -- were sent flying off by the brute vibrating force of the nearby coffee grinder. And I watched in horror-movie slow motion as the lid flew off and an absolutely plague-like number of ladybugs spilled out.

I am not proud to admit it, but every single bad word I have ever uttered on this website came out of my mouth in that moment, loud and clear and in front of my children.

I ran around in a panic, looking for something to...scoop them up with? Something to help me get as many of them back into the container as possible without having to use my bare hands because LOOK I know they're just harmless lil' ladybugs but guuhhhhhh there are so many of them crawling in so many directions and OH SHIT THEY ALSO FLY THAT'S RIGHT.

I made a couple scooping passes using Ezra's homework folder before giving up and just getting the fuck in there with my hands, trying to be as gentle as possible while cursing at the top of my lungs -- no worries about the children's innocent ears, they'd fled the room already and were running around the house shriek-laughing at the strange chaos going down in the kitchen.

"NOT TODAY, CAT," I hollered at him, "NOT FUCKING TODAY."

He looked startled but obeyed, and backed away from the squirming, tempting pile of delicious floor raisins.

At this point I realized that as fast as I was scooping the bugs up, the ones still in the container were even faster. I put a bunch in; just as many were crawling up to the container's edge and attempting to take off. It was like my airport anxiety dream (where I need to board but hundreds of Lego are falling out of my luggage) brought to life. Only the Lego have all sprouted legs and wings are completely disgusting, since most of them were too young to be red/orange yet, and really looked more like tiny sentient mouse turds.

I gave up, put the lid on the container and swept the rest up with our handy broom and dustpan (and hell yeah that's an affiliate link for anyone who still hasn't bought one for their own cereal-challenged children; you'll regret it the next time your spouse's insect hoard hits the ground), then dashed outside to dump them in the flower and strawberry planters on the deck.

I think, in the end, I got most of them either back in the container or outside, although I'm sure I missed at least a few. Which Jason (after getting this entire recap afterwards over text and in mostly all caps) pointed out isn't a bad thing, since our LAST bug infestation encounter involved those annoying pantry moths and we still occasionally spot one. "The ladybugs eat those," he said, like our house is now some real-life version of the old woman who swallowed a fly.

And that was my morning. The day can only go slightly downhill from that, right?

Why? Why buy a container full of live bugs? I don't garden, I have no idea. Do you just leave them in the carton until you are ready to use them? Do you have to feed them? I want to make sure this never happens to me!

Oh jeez. And of course it happens before you've had coffee...

At least it wasn't the praying mantises?!?

@Tracy I know, it's weird. Ladybugs and mantises eat nasty things like aphids and other insects that infest/destroy vegetable plants. They come prefed and you just scatter as needed when you start noticing anything eating your plants. Obviously Jason takes his vegetable gardening SUPER SERIOUSLY. Last year he ordered this shit on Amazon and didn't tell me so I got to open a box full of mysterious smaller boxes labeled LIVE INSECTS.

@Jenn The mantises haven't hatched yet! Just two big egg sacs we'll transfer outside in a few weeks. That actually...would've been more manageable.

They deliberately released a bunch in the Mall of America on Earth Day. Next time I go, it'll be interesting to see if they stick to the indoor plants, or if I'll be dodging insects while shopping.

I found a ladybug in my salad today and lunch. They are fucking everywhere!

At lunch not and lunch. I am obviously still traumatized.

I had no idea you could order live bugs on the internet. You learn something new every day. :)

Literally a worst nightmare scenario for me. Although we did also recently have a pantry moth infestation which totally FREAKED ME OUT and I threw out hundreds of dollars worth of food, and I still freak when I see a moth in the kitchen, so if the ladybugs will eat them than I might be ok. But bugs of all kinds make me uncomfortable. I'm still trying to figure out why my parents bought me an ant farm as a child when all I did was dream about it getting knocked over. And the meal worms we "raised" in 6th grade...I sill don't look at cornflakes the same way.

Dear f*ing christ woman, are you trying to traumatize me!?

When I had a small terrace in NYC I was thrilled to put all kind of plants out there. I ordered ladybugs when the aphids were also thrilled to find my garden. I had to keep them in the fridge and then pour them on my plants, and the whole thing was weird. Shortly after there were a new batch of bugs on my plants, these scary black alligator-looking things with red spots. I later learned I killed off a bunch of ladybug babies when I disposed of them. So if you see horrible looking black and red alligator bugs on your plants next, now you know!

My coworkers son found a praying mantis nest and thought it would be a good idea to bring it inside.....at his grandmothers house. The praying mantis eggs(?) all began to hatch this weekend while grandmother was there alone. So her house is FULL of tiny praying mantis creatures now. Good times!

My favourite line: "like our house is now some real-life version of the old woman who swallowed a fly."

Wait until the ladybugs migrate. (shudder)

and hell yeah that's an affiliate link for anyone who still hasn't bought one for their own cereal-challenged children; you'll regret it the next time your spouse's insect hoard hits the ground)

That made me LOL so hard and I thank you for that. I've been having a rough time and I needed a good hard laugh.

After living in the wilds of Hancock for several years, there is nothing fucking ladylike about those damn bugs! They have been renamed bug bugs around here!

1. I really do feel bad for you, because I do not know what I would have done if I were in that situation.
2. However, I sense a new house rule: No buying bug kits, JASON.
3. I'm still crying with laughter while reading this.

"Tiny sentient mouse turds" might be the most hilarious, yet aptly descriptive line I've read in a long time. I'm crying over here...