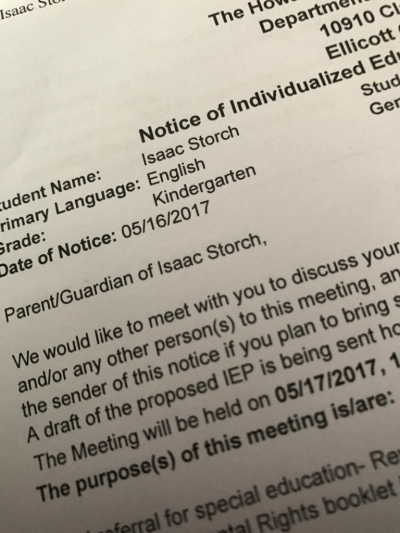 So this happened. Ike's getting an IEP. Welcome to the club, kid.

But he's getting it for the least dramatic reason possible, at least by our household's standards: He has a pretty bad lisp. He needs some speech therapy.

I asked his preschool teachers about the lisp last year -- they weren't too concerned, given his age. He was likely outgrow it on his own.

(I looked into speech therapy anyway last summer, only to learn that articulation disorders aren't covered under our insurance and the cost would be YIKES.)

The elementary school, on the other hand, absolutely provides services for articulation disorders, so I flagged it as a potential concern on every piece of  enrollment paperwork that I possibly could. I asked his kindergarten teacher about the lisp at our first parent-teacher conference -- she'd noticed it, yes. She also wasn't too concerned, given his age, but agreed to have the school's speech pathologist stop by and speak with him.

She did, and blah blah blah not too concerned, given his age, blah blah let's wait and see.

And so we've waited. AND GUESS WHAT.

He hasn't outgrown it. At all. Not even a little bit. He can't pronounce L or R and a bunch of other sounds. He has a tongue thrust that slows his speech down and trips him up on a ton of different words. It's affecting his writing because he can't pronounce words properly to spell them out phonetically. When he tries to go back and read his own writing even he rarely understands what he was trying to say. His peers constantly ask him to repeat himself, and it's affecting his participation in class because he's getting embarrassed to speak in front of the group.

(And yet he wants to go to theater camp!)

(To be fair, both Noah and Ezra had pretty noticeable lisps as toddlers and preschoolers. Noah's speech therapists never thought it was a problem and never addressed it directly. Ezra's pediatrician took the "wait and see" approach as well. They both outgrew it before kindergarten.)

But now that there's a solid argument that yes, this is affecting Ike academically and socially, he will easily qualify for services next year. (And the speech pathologist will provide us with resources and exercises for over the summer.) It's about as good of an outcome and plan as I could ask for, even though ehhhhhhhh I still think the argument could have been made a liiiiiiiittle earlier in the school year. 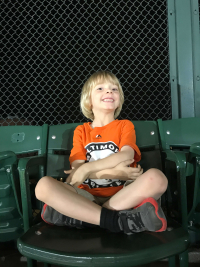 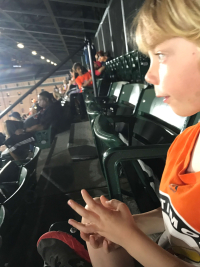 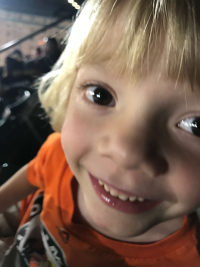 Not that the lisp has taken away a fraction of his larger-than-life hamminess. But I'm really happy and grateful he'll be getting this help.

My son only has 1 speech sound error (in first grade) and it affects how he sounds out words when he writes (for example)
Nok NOK
hooth there?

but that isn't enough to have an IEP here in NC (you have to have 2 developmentally inappropriate sound errors). Glad that Ike meets the criteria & hope he's writing his thoughts SOON!

Yup, here doing this now. Except our school brought it up at the first conferences, so mine has been in therapy most of the year. HUGE DIFFERENCE! He has made a lot of progress in his time. (I no longer have to translate for extended relatives when he talks...at least not much) Ours was effected academically by it too with the writing and sounding out. Best of luck! My kid loves speech therapy, and I think it has something to do with being rewarded in Skittles...

My son has a lisp, and he makes an f sound for a soft th. He is easily understood, though, so I'm curious what will be said in kindergarten if anything at all.

Glad to see he's going to get the help he needs. I think that theater camp will help too. Maybe confide with the teachers/counselors of his speech delays and they may be able to help too.

Ugh I hate wait and see. My daughter (6th grade now) has a lisp. She pronounces th as z.
As in 'What is Zat?' ' Do you have the Zing I asked you for?' In K and 1 they (zay) said it was age appropriate and let's wait and see. In 2nd grade she got braces. She had to learn to talk with the braces and then 2 years later, learn to talk without (wizout) them (zem). Now the middle school does not have speech services unless you have a developmental diagnosis. WTF? And I cannot even remotely afford private speech therapy.

My professor in Small Group Communications told us she got into Communications as a field because of the speech therapy she had for exactly the lisp Ike has. Her lisp only appeared once in class when she was really super excited about something.

Speech therapy is rare before 2nd grade. Most kids have, and then grow out of, most articulation errors and there are benchmark ages for different sounds. It has to be fairly severe to get services earlier without some other developmental
diagnosis.

You know what I love? That you know what's up and had the experience to get him help so young. That is awesome! All three of your kids are so lucky to have you for a momma and will benefit so much from all the early intervention you have been able to get for them!

What a cool dude! EVERY DAY I am so grateful for the services they have for kids in school. My parents (73 year old dad and 64 year old mom) tell me horror stories of their schooling. My dad is left-handed with poor penmanship, and had a teacher that would constantly hit his left hand until it hurt, in attempt to make him write with his right. My mom was a poor, shy child. Her 2nd grade teacher took a shining to her, and would kick her every time she walked by. My heart could not break more for the little kids they were.

My oldest is finishing up 3rd grade and has an anxiety disorder. We kept asking if there was something we should be doing, but until 3rd grade, he could hold it together in the classroom. Finally, he couldn't. So, we just got an IEP for 4th grade - Thank goodness!! Again, I can't even express my gratitude. Our school has put so much into Nathan already. It's amazing.

I'm so glad your kids are getting what they need - and so glad for them that they have you as a mom who fights that good fight.

I'm so glad he's getting the intervention he needs as early as possible! I once had a student who had all sorts of speech problems and his parents weren't worried at all, but he was 8 years old and VERY hard to understand. His parents thought it was kind of cute and didn't see a reason for services, but he really struggled with reading and writing and had enormous meltdowns (screaming, laying on the floor, throwing things, etc.) when he got frustrated that nobody could understand what he was trying to say to them. Sometimes people really don't outgrow the speech stuff...I knew a guy in high school who never outgrew the lisp, and both his first and last names had S's in them. Juthtin Anderthon...cute at 5, not so cute at 17.

Yay for getting Ike an IEP!

My daughter couldn't pronounce "L" (& S & R etc) and her name starts with L. She had 6 sessions of speech therapy at age 4 and at the first session she learned to say L and could proudly pronounce her own name so new friends could understand. It was so great. Good luck to Ike, I hope he has lots of fun with speech!

My baby used to say he Yoved us (and Belya was his sisters name) and it was adorable. My husband is a wait and see kind of person. I am not. He was deployed while the baby was in kindergarten and I totally took advantage of that and pushed for speech therapy. Luckily, he was hard headed and refused to let anyone know he could read, so that worked to get him all kinds of assistance. By the end of first grade he spoke well and was reading above grade level. He loved speech therapy...he got pulled out of the kindergarten class he was meh about and played games and got lollipops.

I'm glad Ike is getting what he needs :) It's sometimes hard to let the baby grow up lol

I'm so glad he'll get what he needs/deserves. I hate the wait and see related to speech. My son still mispronounces words (twenty is quenty, for instance); there are certain consonants together that just need to be repeated. His sisters, my husband, and I understand everything. But his friends sometimes ask him to repeat and the teacher says she has to sometimes, but not as often as she did at the beginning of the year. Because it's not 1) affecting him in class like Ike with writing, etc., and 2) if you say to him TWEN-TY, he says twenty instead of quenty, he doesn't qualify for an IEP. They consider it self-correctable, eventually. But by whom? I correct him when I hear him mispronounce stuff, so is it just that he forgets? He's in second grade; it shouldn't still be this pronounced (his tongue seems like it's an effort to lift sometimes, but the pediatrician says no. We went for hearing tests and his ears are fine too). And like yours, our insurance offers speech but is high as a giraffe's ass. I can't wait to hear about/follow Ike's progress.

My son (age 13) looks back at his time in speech therapy fondly. It was a sad day for him when he was released from his IEP. He loved the therapist, the quick progress, and the quiet time in her office with just a few other students. The speech therapist helped me understand that he had a stutter in addition to his articulation issues. I come from a long family line of men/boys who stutter, and my son's was not the same as theirs so I didn't hear it. So helpful! And that comment by Marianne? She's my HERO. What a beautiful perspective.

I went to speech therapy for a lisp for a few years around Ike's age, maybe a little older. I think a mix of therapy, singing in glee club and being involved with theater helped me resolve it. I also never lisped while I was speaking French. The brain is a weird place, theater camp may help a lot in conjunction with therapy. Sometimes when your brain is worried about something else - like remembering a line or worrying about FRENCH -- it forgets to lisp.

When my nieces were little, my mother lived with them. Although she spoke adequate English, she did so with a strong Dutch accent. When the girls started SK they needed speech therapy as they also spoke English with a Dutch accent. They soon sat my mom in front of a mirror to help her shape her lips to make the "th" sound properly :)