I've been working from/in my actual "office" every day for the first time in awhile, to better bounce back and forth between laptops (three) and email addresses (four), and to have room to spread out piles of documents and keep everything separated by client (five) and basically not rely on keeping everything straight in my head, oh god no, let's not do that, that's how things end up forgotten about and/or on fire.

I haven't worked down here in awhile because one time, not long after we adopted them, the cats hid in the closet and got accidentally trapped overnight, and both of them panic-peed on the carpet. And unlike the Lego bins, getting cat pee odors out of carpet is basically impossible. We've managed it PRETTY well, with both professional cleanings and buying our own carpet deep cleaner and using it regularly (like pretty much every time we vacuum), along with throwing just about every pet stain/odor related product on earth at the problem. So it usually smells just fine (though I think vaguely carpet-cleaner-ish), but other times the smell starts emanating from the padding below and I'm just like, I'm out, I'll be working from the couch again today, ugh.

At some point, yeah, we're just going to have to sack up and replace the carpet. Trust me, it's high on the list of "dammit I can't believe the boring adult shit I need to spend all my money on," right after a new dishwasher and maybe something crazy, like installing a sexy AF utility sink by the washer/dryer.

Until that happens, however, the cats are thoroughly and formally banned from the basement. Because every time they (mostly Stupid Baby) come down here unsupervised, they return to the same corner and are like, YAY INVISIBLE LITTER BOX. So no. They cannot come down here at all, ever. Even if we're down here, because they are sneaky little pee bastards. We even converted the main door into a self-closing one. (A $10 hinge-thing < new flooring = we are cheap and lazy SMART.)

And honestly, that was an even bigger reason why I shunned the office, because I couldn't have my full little pack with me. Upstairs all three of them stay in the same room with me, and often ON ME, which can be annoying whenever I get up and have to shift the lapdesk and laptop while the pets either 1) all jump up frantically and excitedly because WAT WAT R WE GOIN TO THE KITCHEN R WE GETTIN FOODS, or 2) refuse to budge in the slightest while I try to extricate my (likely asleep) legs and feet from under a pile of animals.

Now only Beau gets to come downstairs with me, looking lonely and forlorn on the guest bed, while the cats spend most of their day right outside that damn door, waiting. Every time I go upstairs one or both of them are lying there, usually with a couple paws shoved under the door, because that's not sad/heart-breaking at all. Then they yell at me for a little bit until I pick them up and give them both some attention. Then they want more food.

Also one of them has taken to leaving disgusting liquid-y shits directly outside the litter box. (Finn has IBS, but both of them are prone to a touch of stress-related colitis. We typically manage it just fine with this food, but changes in routine -- or even just the sight of our suitcases -- cause the occasional flare-up. :-/ )

On the one hand, wow, it's kind of nice to know that while your cats are definitely assholes, they are YOUR assholes (wait...phrasing) and actually seem to care when you're not around and prefer to be close to you. That's down right dog like, albeit with worse-smelling pee.

On the other hand, I don't think I've ever felt so guilty to be a working mother in my life. I'm stressing my cats out! I'm a MONSTER. What have I done.

(If you need me, I'll be working from the couch for the rest of the day. I'll be the one covered in pet hair, most likely being 100% ignored by my cats because oh never mind we're over it already let us know when ur gettin us foods.) 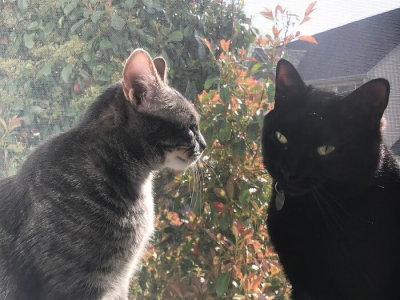 One word. TILE. Don't get more carpet. Invest in some really soft, snuggly sock and put tile down there. You can wipe it up if they pee. Also, if you get tile, invest in some Nature's Miracle to spray on there after you clean the pee!

I just found this product the other day, supposedly it's effective on cat pee, but I can't say for sure. I've got a couple coming to my house in a few days for the general stink of cat/dog/toddler who's only moderately interested in potty training. (https://www.biocidesystems.com/article/how-to-eliminate-the-smell-of-cat-urine-from-your-carpet)

I HAVE however used Anti Icky Poo to get cat pee out of carpet. THAT works really well, but you have to drench the area and if you already used an enzyme cleaner you have to use something called 'P Bath' before hand (not sure why, that's what they recommend, I've never used it so YMMV).

FYI - I have no financial interest in promoting either of those products :).

Pour white vinegar into the carpet. Only substance that truly dissolves urine crystals (I have 2 cats also, one of whom likes to pee in my laundry basket when he's pissed with me.) Then use the carpet cleaner to get the stinky vinegar up. It really does work!

I may be missing some important details but...if they were trapped in just the closet, can just the carpet and padding be cut put of the closet area? Then you will be down to just original flooring which can be cleaned again. Throw in an area rug or some cheap tiles and call it good. As soon as that money tree starts producing you can replace that whole basement carpet!! Bonus...you can all be together then!

We have a two bedroom apartment, so our extra bedroom is our office/playroom/litter box room, due to lack of space. When my cat wants attention, she'll come in and drop a bomb, forcing me to get up and clean the box right away (usually screaming about something crawling up her butt and dying and OMG why does that smell so baaaad). But when she's not quite at 100% asshole level, she'll sit in the doorway and wail until I acknowledge her then come and sit just out of reach. Watching me. Judging me.

I'm a little jealous of your cat pee situation, to be honest. Our cat stress peed on the couch and there was just no saving that. We dry cleaned the couch covers, but couldn't get to the cushions themselves. As long as the weather is nice, you can't smell anything, but when its damp outside, the whole living room has eau de cat. Its a good thing she's cute.

No cats, no advice - just dropping by to commend you on incorporating "sack up" into this post. Solid turn of phrase.

My cat pees right in the middle of my king size bed while we were sleeping in it. On top of the down comforter and flannel sheets, and super expensive (but not waterproof!) organic cotton mattress pad. So many layers to launder and steam clean! Granted, that was after I brought another cat into the house and didn't immediately provide her with a super special private litter box. Totally my fault.

Definitely pull out the closet carpet and padding. (razor knife across the closet door, use pliers to pull out staples). Then Nature's Miracle the crap out of the floor underneath, and when it's dry put down a piece of sheet linoleum from your favorite giant home improvement store. Maybe an hour, under $100, no more smell.

You can drop a small litter box in there, too, just in case.

Working from home can be a blessing and a curse. My cats - and my baby - sort of let me work. My MIL comes over and snuggles with the baby, but doesn't do anything for the cats.

I had the exact same thought as Cheryl. Pulling carpet out of a single closet isn't a big deal. Actually, if you care about matchy matchy carpet, the installers usually leave behind a remnant or two for exactly this type of situation (which homeowners proceed to haul into the attic and pretty much forget they have- check your attic or under the basement stairs- it may exist). Even if you don't have a remnant for that space, vinyl stick on tiles are very cheap and would be fine for a basement closet.

Don't get more carpet. When I bought this house I just tiled everything and told myself I would get area rugs when my cat who used pee as a weapon passed away. But really, I don't miss the carpet at all. I KNOW these floors are clean, carpet hides may secrets!

I have never found a better product than this:
https://www.amazon.com/gp/product/B00HV2PVRM/ref=oh_aui_search_detailpage?ie=UTF8&psc=1

Amen to the Nature's Miracle suggestions. I've had eleven cats in the past twenty years (maxing out at six/time though) and can't say enough good things about that stuff. For carpet though you need to really pour it on and let it soak ask the way down. I just buy it by the gallon. Btw, it's really good on other 'organic' stains too, such as red wine and berry juice.

what Monica Cohen above said - rip up the ruined carpet and pad, put down tile or even just an area rug, and then get a litter box in there. I have a built in cat bathroom in the basement, hidden under the stairs, completely tiled with two giant rubbermaid bins as litter boxes. why buy a litter box when a bin works fine and the size options are better?

And if you're feeling really extravagant put a tile warmer under that tile. . boring and not cheap but makes the space so cozy and un-basementy. We put them in the bathrooms when we sent the 70's packing a few years back. Worth every penny.

Odormute is the best enzymatic cleaner I've found. It's kind of a pain because it's a powder you have to mix with warm water right before use (it says it's good for up to 2 hours) but it works really well. I had a similar issue with one of our new kittens getting trapped in the nursery during naptime and peeing on the rug. It completely took the smell out and none of the cats have re-soiled that area even when trapped in the room for hours (they love to slip in behind me and hide under the crib).

This is the best one we have found. We've tried SO MANY as well.

Oh, and if it's really just one spot, use plastic carpet runner upside down (yes, spikes up) on the spot to keep them off it.