Persistence in All Things

I had a consult with a tattoo artist to finally, FINALLY get some cover-up work done on the truly terrible, highly regrettable J-A-S-O-N ink on my back left hip. Remember that? If not, yeah. I got my boyfriend's name tattoo'ed offset tramp-stamp style when I was 19 years old. Classaaaayyyyy.

While I still like the guy very much, I really hate the tattoo. It was poorly done, embarrassing almost immediately (I mean, WHO DOES THAT? Besides impulsive and slightly tipsy 19-year-old girls away at college whose roommate is getting a daisy on her ankle oh wait okay never mind), and now it's 20 years old and completely warped and faded -- and annoyingly visible enough over my pants' waistline and two-piece bathing suits.

I thought about just getting it removed, but always decided against that. It was a stupid thing to get done, but just like getting married less than a year later at 20 years old was ALSO not typically considered the greatest of ideas...we did defy a whole heapload of odds to remain married and happy this many years later. The tattoo has always felt kind of tied to that, and "erasing" it just never appealed to me.

You'll have to wait until late next month to see the new work, since it'll be completely custom and the artist is crazy booked up. I'm excited though! It'll be what tattoos should be -- something deeply meaningful that I've thought about for a good long time. A tattoo I'd get even without the need to cover something else up.

While I was there, though, I did get something small done. Something I feel like I've also wanted to get done FOR AGES, even though in reality, it's been since February. But oh dear God, how long ago does February seem these days? I've aged 80 million years since then. 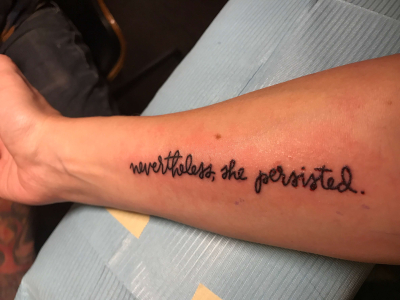 (Design by Chelsea Brink of Minneapolis, execution by Red Thorn Tattoo in Baltimore. The design is free to use, she just asks that you make a donation to a women's rights organization of your choice. I chose Planned Parenthood. The tattoo took barely five minutes to complete so it's perfect for wussies.)

I never thought I'd be a super-visible tattoo placement sort of person, and certainly never planned on taking the plunge at 39 damn years old (with words from Mitch McConnell's mouth, for chrissakes!), but this is an odd time, when lots of things I "never thought" would happen...well, happened, or are frighteningly possible. This, at least, was something that made me feel a bit better, and a lot stronger. Don't ever stop talking, fighting, trying. Don't ever get complacent or take things for granted, or expect other people to do the work on your behalf.

History has its eyes on all of us, as do our children. 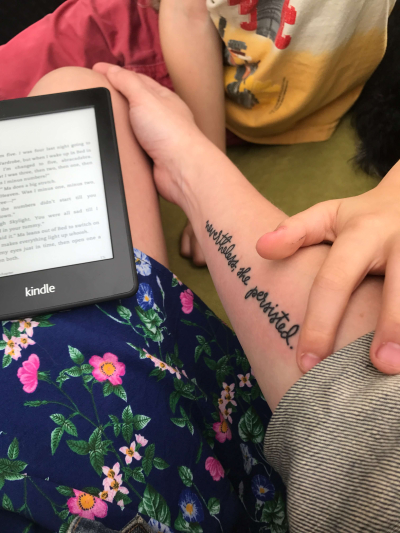 I'm reading this post while watching episode 4 on Hulu. Read the book last week. The tattoo is perfect. And thank you for being you.

I have an appointment on June 10th to have that tattooed on my forearm. And goodness, has it only been since FEBRUARY? We're living dog years here.

I just got a purple streak in my hair, having never colored my hair before, having just made an angry call to my parents' congressperson.

These are strange times.

AMY I have visible tattoos but I got another one right after the election: the words non-compliant in the shaft of an arrow on my left forearm. To remind me to move forward and that non-compliance is key here (it's also a shout out to the "Bitch Planet" comic by Kelly Sue Deconnick).

I AM HERE FOR THIS.

I, too, got an ill-advised offset tramp stamp at 19! It was totally a thing back then. Mine is a butterfly. I'll be interested to see what you went with when you have the cover up work done. I sort of figured I was just going to leave mine and *shrug*, but maybe it would be nice to have something I find really meaningful on that spot instead!

I wish I were brave enough for a tattoo. Yours is absolutely perfect!

On a small note of victory, I got my mom to call her congressman regarding the anti-healthcare bill. First time she's ever called her representative before!

Nolite te bastardes carborundorum, indeed! Love the new tattoo! I've got that quote on my car (bumper sticker) but yours is so much more bad-ass. Congrats!!!

Yay!!! Couldn't love this more. I've never considered a tattoo... but that makes me think.

Damn, that's a cool tattoo. I haven't had any ink done in over twelve years, but I have been planning something for the past five. Maybe this summer is the right time.

Awesome! I love it. It is weird to have a Mitch Mc Connell quote on your body, but the story of how it was flipped and embraced is what makes it SO GOOD. It'll be even better if she's president someday (dude, obviously, anything can happen in this place!). 💪

Alllll the tattoo love for that!!! I also got an ill-advised front-hip tattoo at 19. It's a tiny blue star, poorly done, and I want to cover it up so badly! But I need to find something meaningful. And my husband hates tattoos. Not that that means I won't do it, but it makes me feel like I need to pick something exceptionally great.

I have wanted this tattoo ever since people first lined up out the door for it in Minneapolis. (I live nearby.) It looks awesome! I don't have any tattoos, but I think I might go for it.

I am a Trump supporter. I think I will get that same tattoo. It is a world for my children also and even though our reasons are different, I know the type of world I want for them. That is ok.

I got a tattoo in a huff two days after the election, and another a month later. This shit is bananas.

I also started getting tattooed well into my 30's, though I have always loved them, and my husband is not yet exactly on board with them. But screw it, if it is something meaningful and personal to you and your body, do it! Also, Nolite te bastardes carborundorum was my high school yearbook quote. Didn't quite think I'd ever see that quote and that book be quite so applicable to my actual reality, though.

I've commented here frequently and am also the proud owner of an ill-advised spousal tattoo (divorced now, and have covered) among others. I read an article about the history of tattooing and it started with women. The gist of the article was that claiming our bodies as our own and marking them is a way to embrace our power. I couldn't quite pinpoint why I loved getting tattooed so much (9 now, with a 10th on deck) and that's it - it makes me feel powerful.

Keep doing what you do...raise hell and get tattooed. xo

Badass. I want to do this too.

OK so I'm too scared to ever get a tattoo but can I get that image on a t-shirt? I like that design better than others I've seen.

I commented on your instagram. I am a long time lurker and fellow DMV resident. You have gotten me through now 3 (!) kids aged 8, 5 and 20 months. I work at PP and I am so happy that you donated and happy that you are talking about the march and all the things. Thank you for your voice. It is important.