Ezra and Ike attended a kids' cooking camp this week, which has been delightful, especially since Ezra sweet talked his counselor into letting him bring home an extra cupcake for "his mom who really loves cupcakes." I originally signed them both up thinking they'd be together, so Big Bro could help keep Little Bro out of trouble (or at least keep his head out of the ovens, or something), but they were divided into different age groups. Ike's been pretty mad about that, which may or may not have been a reason behind the Incident Report we received:

According to the camp nurse:

"Isaac complained that he had something in his nose. Asked Isaac to blow hard to remove the object from his nose."

According to Sir Isaac himself, he "dropped a bead on the table and it bounced back up into [his] nose and got stuck there." 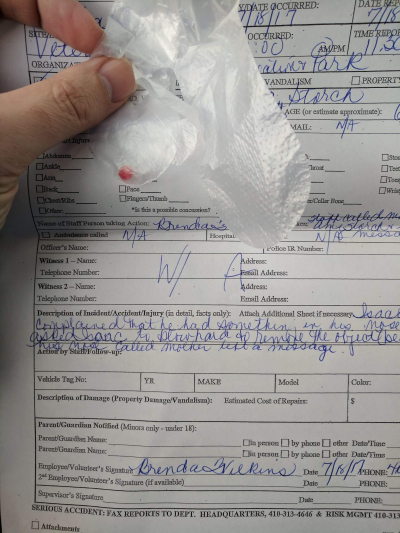 WELL AT LEAST WE GOT TO KEEP THE BEAD.

Have you been reading Little Men to him?

In my part of the world, you'd be putting that bead in a silver cast to hang around your neck. Along with each of your kids' first tooth.

Well, I was fully expecting a pea or some other foodstuff, so... win?

My brain likes to transfix on tiny little details... why were there beads in cooking class? And such bouncy beads at that!

I once got a small pebble stuck up my nose at nursery (discovered I could "blow" it out, rinse and repeat until it got stuck). They threatened to use pepper to make me sneeze. Gah. It came out just in time. Wouldn't recommend.

Has Ezra ever seen Nerdy Nummies? It's a YouTube show with geek-themed baking recipes. Was watching the host make a minecraft pumpkin pie with captain sparkles and suddenly wondered if this would be a thing you guys might be interested in.

When I was around his age we had a mirrored coffee table and one afternoon I discovered it was the perfect height to see directly up my nose. I proceeded to stick a bunch of shelled peas up there and then freaked the F out when they got stuck. I was ever so quietly trying to solve my own problem when my mom found me there, silently weeping with my finger shoved up there trying to hook a pea.
All it took was one good blow though.
Wait, the phrasing there is off, oh well. You know what I mean.