Ike had his six-year routine physical yesterday, and in Classic Ike style, it ended up not being as routine as I was expecting. He's on track height-wise, shooting up over three inches this past year. Weight-wise...not so much. He's always been a skinny thing, but consistently 25th-percentile-or-so skinny. He gained just a tad over a pound this year, which knocks him all the way down to the 12th. And while growth charts are certainly prone to some year-to-year weirdness, our doctor was very much Not Happy and Rather Concerned with Ike's weight. At barely 39 pounds, he's underweight for both his age and height, and it's just super inconsistent with his growth so far. Now, we dealt with our fair share of Dinnertime Pickiness Drama Shenanigans this year, but I really thought 1) he's been doing much, much better for several months now, and 2) we were more than making up the calories of a smaller dinner elsewhere throughout the day. Good breakfasts, a generous lunch, lots of healthy snacks. He drinks whole milk and loves cheese and yogurt and granola bars and fruit and chicken and steak and fruit/vegetable smoothies. He doesn't drink soda or get regular candy and... Read more →

Two Days, By The Numbers 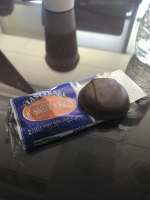 Ezra and Ike attended a kids' cooking camp this week, which has been delightful, especially since Ezra sweet talked his counselor into letting him bring home an extra cupcake for "his mom who really loves cupcakes." I originally signed them both up thinking they'd be together, so Big Bro could help keep Little Bro out of trouble (or at least keep his head out of the ovens, or something), but they were divided into different age groups. Ike's been pretty mad about that, which may or may not have been a reason behind the Incident Report we received: According to the camp nurse: "Isaac complained that he had something in his nose. Asked Isaac to blow hard to remove the object from his nose." According to Sir Isaac himself, he "dropped a bead on the table and it bounced back up into [his] nose and got stuck there." WELL AT LEAST WE GOT TO KEEP THE BEAD. Read more → 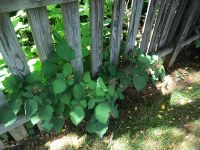 Late last summer, I discovered dozens of wild raspberry bushes in the woods behind our fence in the backyard. There were only a few stray berries left by that point, but Ezra and I did our best to harvest every last one we could. And I promised him that we'd pay better attention this year and maybe we'd get a few more. We started out picking just what we could reach through or over our fence, since we were a little wary of all the bugs and thorny things back there. (Of course we collected them in half of a Lego Star Wars planet. WTF else would you use?) Then one day, after watching Ezra pine for the dozens and dozens of bright red berries just beyond our reach, I said screw it, and hoisted him (and then my own ass) up and over the fence. Turns out, it's magic back there. Yes, there are thorns and mosquitoes and uneven rock paths. There are prickly vines to duck under, that catch and snag your hair and clothing and refuse to let go. There's a small stream that fills your shoes with muddy water, if you take a bad step on... Read more → 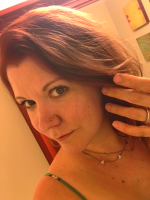 This post is sponsored by PURA D'OR and 2MinuteClub. After my last sponsored post on 2MinuteClub's skin products (which I am still using, still loving, BTW), a wholllllllle bunch of people asked me if I'd tried their best-selling Facebook-famous shampoo and conditioner. I said that I had not, but really wanted to, and...well. Mayyyyyyyybe if they were happy with the skincare post they'd let me try the hair care line next. BOO YAH. First, here's what I'm dealing with: Super duper fine hair. I have a ton of it growing out from my oily-as-anything scalp, but thanks to the aforementioned fineness, plus coloring and heat styling, it gets increasingly dry and brittle as it grows out. Which means lots of breakage and fly-aways and split ends that require regular trims. Which also means I have been trying to grow my hair out to my Goal Length (of just below boob level) for approximately 700 years. I'm still several inches short, since I eventually end up having to cut back most (if not all) of the growth progress thanks to the dryness and breakage. Now I know I could stop 1) coloring and 2) heat styling, but y'all. Come on. Frizzy,... Read more → 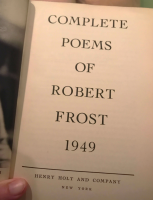 From The Complete Poems of Robert Frost 1949 When I see birches bend to left and right Across the lines of straighter darker trees, I like to think some boy's been swinging them. But swinging doesn't bend them down to stay As ice-storms do. Often you must have seen them Loaded with ice a sunny winter morning After a rain. They click upon themselves As the breeze rises, and turn many-colored As the stir cracks and crazes their enamel. Soon the sun's warmth makes them shed crystal shells Shattering and avalanching on the snow-crust— Such heaps of broken glass to sweep away You'd think the inner dome of heaven had fallen. They are dragged to the withered bracken by the load, And they seem not to break; though once they are bowed So low for long, they never right themselves: You may see their trunks arching in the woods Years afterwards, trailing their leaves on the ground Like girls on hands and knees that throw their hair Before them over their heads to dry in the sun. But I was going to say when Truth broke in With all her matter-of-fact about the ice-storm I should prefer to have some... Read more → 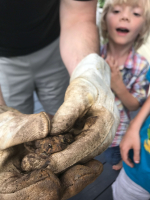 On the very same day we got a new dog, Jason found a wee little frog in the garden. The kids (who just got a new dog) asked if we could keep it as a pet. I said no, we just got a new dog. Like literally an hour ago. The kids (who just got a new dog), said awwww, that's mean. That frog was our best friend. We had the world's shortest IEP meeting yesterday for Ike's lisping issue. Surprise surprise, he does indeed officially qualify as having a moderate speech impairment and will be getting 30 minutes a week of individual or small group speech therapy, combined with additional support in the general education classroom. He has exactly ONE PAGE of goals (basically all the sounds he can't produce correctly divided into four groups), which -- as mah fellow IEP peeps can testify to -- is goddamn ADORABLE. It's the cutest, tiniest IEP in the world. (And yet the entire thing is still 25+ pages long printed out. I feel like maybe this is the real education scandal Betsy DeVos should look into: America's freeloading special education students are destroying America's trees!!1!) The meeting lasted barely 15 minutes.... Read more →

The Specklemutt as a Young Girl

WHY HELLO BELLY So it appears the Popsters has always been a tad...um...rotund around the middle, which has already changed dramatically after just one week with us and all our assorted insanity. She's actually shaped more like a dog than a barrel on legs. In her mind, though, she's still the same size as in her puppy pics. We really aren't doing anything to dispel that illusion for her, to be honest. Poppy's first week really couldn't have gone any better. She's learning our routine and following Beau's lead, sleeping beautifully (and silently!) in her crate, going potty outside, unless we space out on the need for more puppy-frequent breaks. Or if it's raining. (Beau's like: HA HA SAME LOOK AT WHAT LITTLE PRINCESSES WE ARE.) Beau's already a lot less jealous/defensive over toys and attention and really, REALLY loves their near-constant playtime. They play play play then sleep sleep sleep until one of them wakes up and starts it all up again. They both seem really happy. The boys were originally not super stoked about getting a "big" dog. They were thrilled to hear we were considering a puppy but wanted a super tiny one. But it didn't take... Read more → 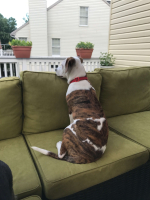 Let's be honest. Is anyone here for anything other than dog photos? Most certainly not. We've decided to stick with Poppy, but are changing the spelling because random i-for-y swaps in names makes my eyelid twitch. It's been her name since puppyhood, she responds really well to it, and honestly, it just kinda suits her. It's also an EXCELLENT jumping off point for all sorts of ridiculous nicknames. Poppy Pie. Popsters. Popsicle. Popscotch. Poppins. Popparoni. (A friend who was lobbying for keeping the name sent me like a dozen separate texts yesterday of increasingly ridiculous nicknames and I have to say, she laid out a compelling argument. Especially when she started changing "pop" to "poop.") Beau is loving his playmate, but will let you know the second you are giving her too much attention. Usually by just climbing on top of her head and being like, "What other dog? Is just me here, sittin' on a dog-shaped pillow." To which Poppy responds: "This is fine. Everything that happens is fine." They play and play and play and then sleep and sleep and sleep. (I feel like Poppy's presence really brings out the Ewok resemblance in Beau for some reason.) Okay,... Read more →

THE DOGGO HAS LANDED 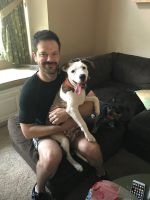 LOOKIT. LOOKIT OUR NEW BABEH GIRL. WHO IS A VERY VERY GOOD GIRL. This is Poppi! (That's her rescue name that may or may not stick; we've yet to come to a consensus on any other one suggestion.) She's a teeny tiny little five-month-old puppy baby who already has 20 pounds on Beau. She's going to be a bit...uh, bigger than the hamsters and ferrets we like to pass off as dogs around here. We knew She Was It probably 30 seconds after meeting her. We've introduced Beau to a LOT of adoptable dogs over the past month -- we never met one who was his instant BFF like this girl. They were off leash together in our backyard after 10 minutes or so and were clearly perfect playmates for each other. She's a pittie mix...our guess is either Dalmatian or Labrador, but who knows, who really cares. She is sweet as a pie that you take one bite of and then say, "this pie is way too damn sweet, like dial it back on the sweet, PIE." She's been in foster care since she was around eight weeks old (was a shelter puppy before that). She lived with multiple... Read more →