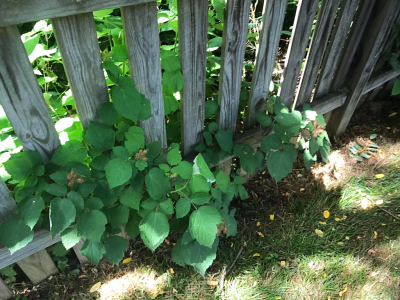 Late last summer, I discovered dozens of wild raspberry bushes in the woods behind our fence in the backyard. There were only a few stray berries left by that point, but Ezra and I did our best to harvest every last one we could. And I promised him that we'd pay better attention this year and maybe we'd get a few more.

We started out picking just what we could reach through or over our fence, since we were a little wary of all the bugs and thorny things back there. 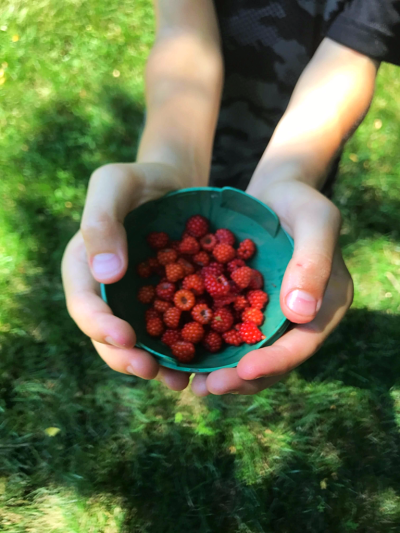 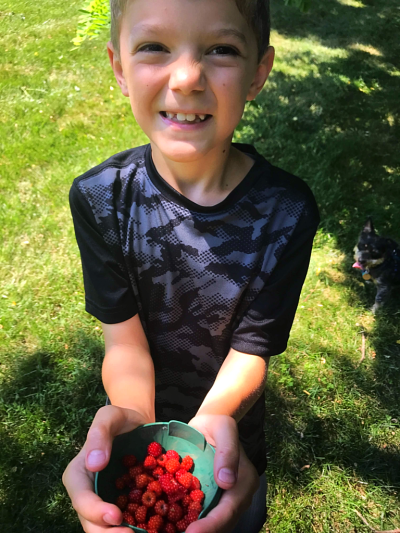 (Of course we collected them in half of a Lego Star Wars planet. WTF else would you use?) 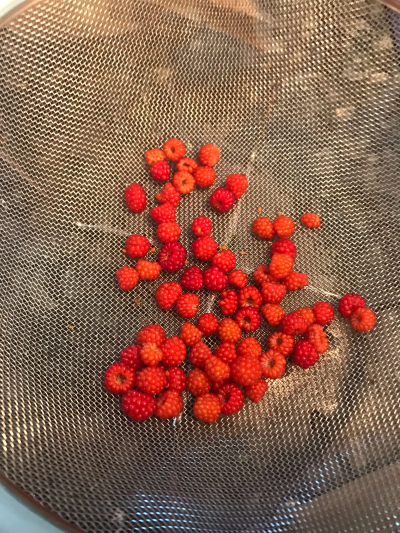 Then one day, after watching Ezra pine for the dozens and dozens of bright red berries just beyond our reach, I said screw it, and hoisted him (and then my own ass) up and over the fence.

Turns out, it's magic back there.

Yes, there are thorns and mosquitoes and uneven rock paths. There are prickly vines to duck under, that catch and snag your hair and clothing and refuse to let go. There's a small stream that fills your shoes with muddy water, if you take a bad step on the aforementioned rock path. 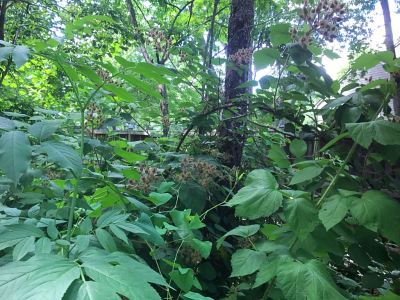 But there are raspberries, hundreds and hundreds of raspberries. We appear to be the only creatures -- human or otherwise -- interested in them.

Going Over The Fence is now a near-daily ritual. Each time we brought bigger bowls and got braver in our footing and less intimidated by the thorns. I watched Ezra duck and climb and strain to reach every possible berry he could spot, counting each one until inevitably losing track. 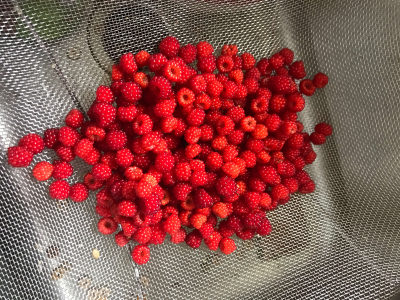 And yes, I am sure they are not organic and probably get sprayed by the county with God knows what. 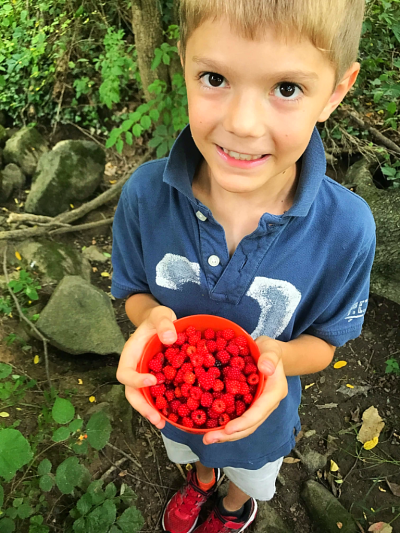 I really can't bring myself to care too much, not in the face of such pure childhood adventuring Over The Fence.

"This is the GREATEST. SUMMER. EVER!" Ezra bellowed after one particularly successful harvest. We were all filthy and sweaty and bruised and scraped up and itching from mosquito bites.

Ike came along that time and got his hair snagged by a thorny bush and cried a little, then quickly ducked down and breathlessly announced a new find: A small clearing full of wild blackberry bushes, not quite ripe yet. Once the raspberries are gone, we'll get to pick those.

"It's like our own secret garden!" Ezra said, whispering this time.

I wanted to make homemade raspberry yogurt popsicles...but everybody keeps eating the berries before I can save up enough. 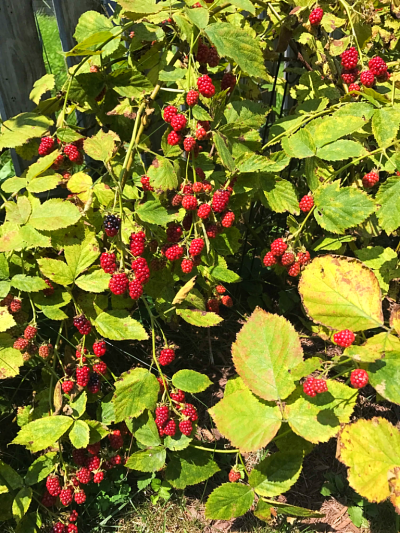 We actually have two blackberry bushes right in our yard that are producing like gangbusters this year -- big, beautiful grocery-store-worthy berries without a thorn in sight. Ezra dutifully checks it for ripe berries with me every morning before breakfast, but...well, it isn't the same. It isn't as fun as the berries we find Over The Fence.

We could easily walk or ride our bikes around to the other side of the neighborhood and get to the woods that way. But...well, again, that just isn't the same either. 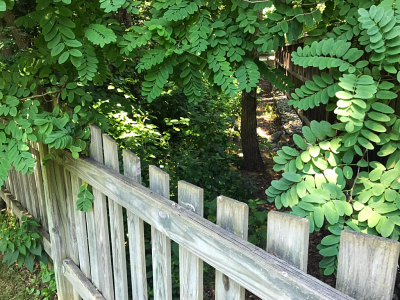 The best way to magic is Over The Fence.

Raspberries are my favorite. I had a magical summer living on the property of an defunct berry farm one year. The only surviving vines were the raspberries. My brothers and I would sit in the hot sun, picking and eating them for hours. More than 25 years later, the taste of a good raspberry brings me right back to that dusty farm. Making those memories that last a lifetime with your boys, so fun.

Awe - this is so sweet! I love their enthusiasm for An Adventure! Totally hoping my little boy can make some memories like this one day.

Those actually look like wineberries - Rubus phoenicolasius - to me based on the fuzzy pods I'm seeing in the first photo. Even better than raspberries in many ways IMHO.

You are so right, going over the fence is what makes it an adventure. So glad you and the boys are having this summer fun!

my niece has been visiting me here in pa for the last 2 weeks. she has been thrilled to run around our 1-1/2 acres picking raspberries. there are bushes everywhere and they are filled with berries ripening in the sun i froze a bag of berries for her to take with her on the train today on her way to visit her grandparents in boston.

Sounds like it's time to cut a hole in that fence for a magical gate to "Over the Fence" land. :)

the house i grew up in had raspberry bushes in a particularly magic corner of the backyard and they started to grow along the perimeter of the house as i grew up. im almost positive they predated us moving into the house so they felt extra magic since we didn't plant them. picking raspberries with my dad is one of my most vivid summer memories--as well as sneaking them (unwashed, oops) after playing outside with my friends even though i wasn't supposed. to. thanks for helping me to remember that today as i slog away at my desk inside on this gorgeous afternoon.

Yes, those are wineberries. Still good though. Where there are wineberries, there are usually black raspberries.....different and better than blackberries. Here in PA they were ripe in mid june this year, so start looking over the fence in MD late May/early June next year. Or plant some! Lots of different varieties and sometimes (at least in PA) they are sold at the county conservation district's annual spring plant sales, so look and see if your county conservation district sells them next spring. https://www.howardcountymd.gov/PlantNatives

Elizabeth Enright has some wonderful books about just this kind of discovery (the Melendy Family series and the Gone Away Lake series). See also: Windmill Summer (by Hila Feil).

Have your husband build a locking gate for you guys to get to your secret garden! Or get two cheapo stepstools/ladder stools so you can safely "hop" the fence :)

I love love raspberries but wild blackberries are so much better than those from the store. Store blackberries are sour and/or tasteless and just plain awful once you have picked the berries straight off the bushes. Yum. Am salivating now.

My kids and I have been stopping by a mulberry bush on the way home from daycare most days to pick berries and eat them on the walk. The randomness and immediacy of the stop seems to make it more magical for them. I think they also like that I tell stories about picking mulberries at my parents' house when I was a kid and I enjoy sharing something from my childhood with them!

I love this. What fun adventures! :)

I truly LOVE this post!!! And the sweet smile on Ezra's face. So much magic!

Childhood magic... it cannot be over-valued and cannot be tampered with.
My guess is "Over the Fence" will elicit memories for years to come! Thank you for letting us share in it with you!

Like others, I sense a new gate in your future soon ;)

Such a great post!!! There is a new children's book out by Amy Ephron called "The Castle in the Mist" about a brother and sister who venture into the woods and through a secret locked gate. Perfect for Ezra's age!

So fun! There is something seriously magical about picking your own fruit in the wild. My oldest was so enamored with picking the wild plums in our woods I learned how to can just so we could put the fruit to good use! Anything for those smiles and memories, amiright?

I love this. I have a one year-old and a baby on the way and I can't wait until we can all go adventuring.

We have loads of these wild berries near us in New York also. We have been picking them by the bucketful for years, assuming they were raspberries, and they are so yummy. I just learned last week that they are Japanese wine berries- a varietal of raspberry but different from regular raspberries. They are the best- my kids and I pick them like crazy and eat most of them before we even get home!

My grandparents had a few acres of land (some of it unmaintained) and every summer some of the more wild spaces would erupt in wild blackberries. Still to this day one of my most favourite childhood memories is my grandma taking me as a little girl to pick blackberries. My grandpa would go on ahead and mow little footpaths into where they grew, and we would pick buckets full and my grandma would make jam. Now that I'm an adult, I still get really really excited if I see a blackberry bush and this summer I took my daughter back to my grandparent's old house to go berry picking.
This time I had to laugh at myself because it was one of the first times I really realized the difference between being an adult and a kid. My daughter was totally oblivious to thorns, mosquitos, anything... meanwhile I was thinking "hmm IS that poison ivy? Am I going to pull this berry and see a giant spider attached?" I never once thought about those things as a kid!

This brings back memories of picking berries with my Grandmother. She made some of the best homemade blackberry preserves.

My son and I have gotten hooked on past seasons of Chopped Junior and all of the young chefs remind me of your stories of Ezra and his love of cooking.

This is SOOO sweet! I love that you get to do this with your little (and not-so) peoples. As a different perspective, I vote that the 'over' part of over the fence is part of the charm and adventure. No gate :)

Salivating from the depths of an Australian winter (which is mild in comparison to the States,I know, but still. Summer berries are the BEST). Loved this post!