Let's be honest. Is anyone here for anything other than dog photos? 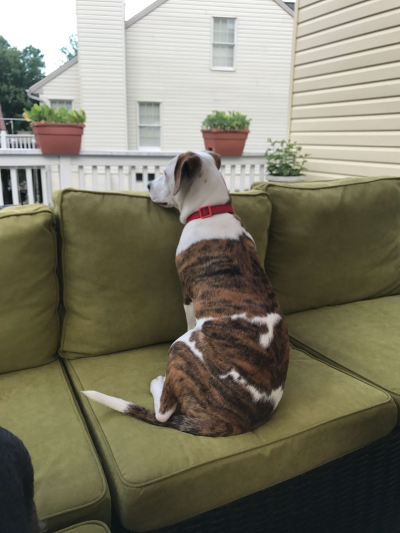 We've decided to stick with Poppy, but are changing the spelling because random i-for-y swaps in names makes my eyelid twitch. It's been her name since puppyhood, she responds really well to it, and honestly, it just kinda suits her. 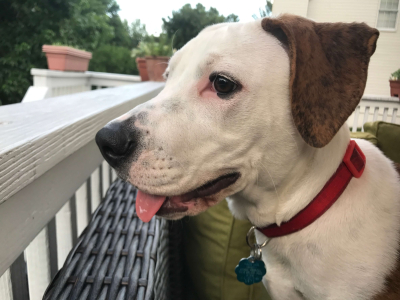 It's also an EXCELLENT jumping off point for all sorts of ridiculous nicknames. Poppy Pie. Popsters. Popsicle. Popscotch. Poppins. 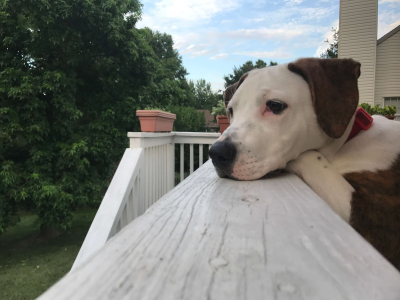 (A friend who was lobbying for keeping the name sent me like a dozen separate texts yesterday of increasingly ridiculous nicknames and I have to say, she laid out a compelling argument. Especially when she started changing "pop" to "poop.") 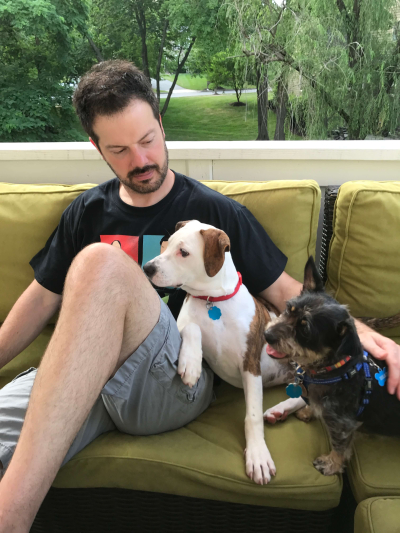 Beau is loving his playmate, but will let you know the second you are giving her too much attention. Usually by just climbing on top of her head and being like, "What other dog? Is just me here, sittin' on a dog-shaped pillow."

To which Poppy responds: "This is fine. Everything that happens is fine." 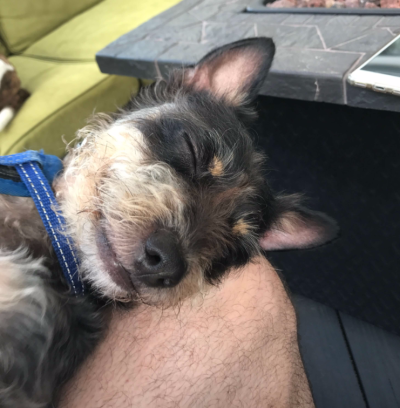 (I feel like Poppy's presence really brings out the Ewok resemblance in Beau for some reason.)

Okay, any more photos and this site will never load and perhaps finally burst at its scotch-taped rickety seams, so I will stop. For now. Not to be a big ol' tease but I MAY or MAY NOT have gotten a stash of photos from Poppy's foster mom, taken when she was super brand-new and tiny. So we will have to talk about those, and ALSO I did go and get my big tattoo done last weekend, which was the most exciting thing for about 36 hours until the next most exciting thing came along. (I spotted it in the mirror this morning and was like WTF is all over my back? Oh right.) So I need to unveil that and also I got a (used) bike that I actually am really loving and I'm starting work with a personal trainer at the YMCA (he was on sale!) and Ike's got an IEP meeting next week and gaaaaahhhhhhh who cares let's just look at one more photo of dogs. 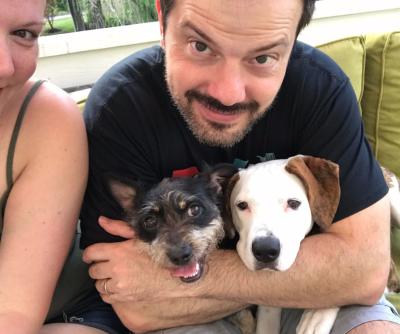 (DEAD. Framing this one after I come back to like and crop my chipmunk cheek out.)

So sweet! One of our dogs is a Poppy as well. Her commonest nickname is Professor Poppypants, followed by Princess Poppy the Insouciant.

It's wonderful that your doggos are getting along so well together.

Super cute! If they get along this well already, they should continue to get along. If Poppy is the submissive dog, follow that through with everything you do. Dogs absolutely recognize and keep track of who gets what when. Treats go to Beau first, beau's food gets put down first, beau gets petted first upon coming home, etc. Nobody ever gets anything that both don't get.

You're going to love two dogs!

I see lots of Trolls Poppy references in your future. Doggos are too cutez. Can't handle.

Sweet! After you share Poppy Puppy Pictures, you can resume our regularly scheduled programming!

Poppy really is adorable. Glad you kept her name w/ minor spelling adjustment. I agree, from the pics it suits her.

Ahhh her little dalmatian face!!!!!! And the ever-cuteness of Beau.

Beau looks SOOOOO content!!! And I love the name Poppy. It really does fit her. Our doggo is named Maisey, but I call her Maisey Jo Piddlepants (when she was little and piddles when she got excited), Maisey Jo Wiggle Butt (obvious) and Maisey Jo Thunderpaws THE DESTROYER! Mostly she's just Jo Jo or Dorkasaurus or Mai-Mai. :)

Love all the nicknames! Our newest pup is Pepper, and she has been: Pepperoni, Pepper Ann, Pepsi, Pep-Pep, Peppy-Longstocking, and occasionally Hey-Dummy-You-Can't-Fit-Under-That-Chair-Anymore.

For awhile, she probably thought her name was Pepper NO!

Anyway, you guys did a good job of picking out a new one. :)

Not to detract from the Poppy love, but did you ever get Beau's ancestry done? He is the spitting image of my Joey Joe Joe Shabadoo and I've always wondered what he is. My long time theory has been Shi tzu/Min Pin.

Poppy is beautiful. I she classic doggy. Smiling and tongue hanging out!

@Melissa We did but (uhhhh awkward because it was a sponsored post....) it came back as Chihuahua, Pomeranian and Pekingese. Basically three breeds we see zero resemblance to.

A friend has a King Charles spaniel and she was named Mary Poppins, forever called Poppy. I love the name.

Our English Bulldog's registered name is Noelle Not Poppy (Ella). Suffice to say a (then) 14-year-old daughter can be somewhat insistent (obnoxiously so) about naming her Poppy. I loved it, but even I got sick of hearing it in the relentless campaign. She was a holiday pup, so in a weak attempt at grasping another name she was dubbed the not very original Noelle. But she's always called Ella or some variation, which I love. And I even call her Poppy occasionally, too. I do love the name, so I'm happy you stayed with it. Also, you don't have a 14-year-old daughter, or perhaps you may have dubbed yours something different, as well ;).

Poppy is precious. I had a pit mix (English bull and mastiff in there) and he was the sweetest, biggest baby dog ever. Forever thought he was a lapdog. Had him from puppyhood and he was a gentle soul with a wicked tail thwap! Watch out for anything breakable on your coffee table. Those 2 pups are going to be great friends.