The Specklemutt as a Young Girl 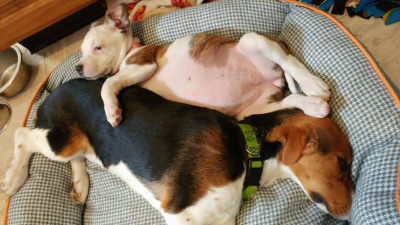 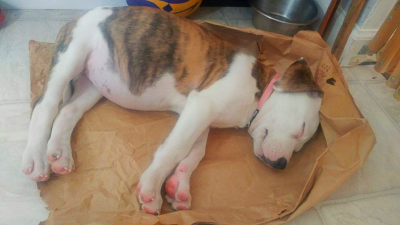 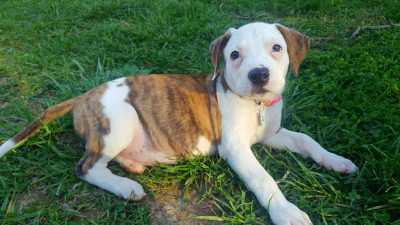 So it appears the Popsters has always been a tad...um...rotund around the middle, which has already changed dramatically after just one week with us and all our assorted insanity. She's actually shaped more like a dog than a barrel on legs. 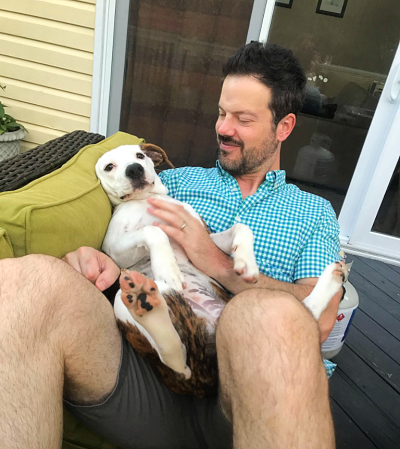 In her mind, though, she's still the same size as in her puppy pics. 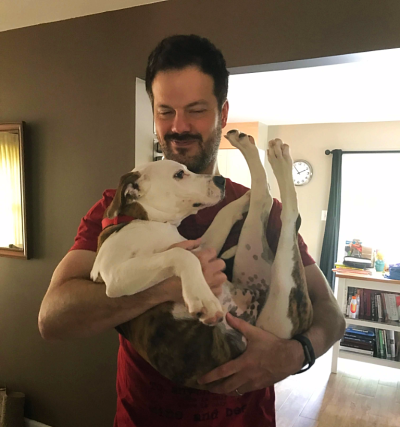 We really aren't doing anything to dispel that illusion for her, to be honest.

Poppy's first week really couldn't have gone any better. She's learning our routine and following Beau's lead, sleeping beautifully (and silently!) in her crate, going potty outside, unless we space out on the need for more puppy-frequent breaks. Or if it's raining. (Beau's like: HA HA SAME LOOK AT WHAT LITTLE PRINCESSES WE ARE.) Beau's already a lot less jealous/defensive over toys and attention and really, REALLY loves their near-constant playtime. They play play play then sleep sleep sleep until one of them wakes up and starts it all up again. They both seem really happy.

The boys were originally not super stoked about getting a "big" dog. They were thrilled to hear we were considering a puppy but wanted a super tiny one. But it didn't take them too long to discover the joy of wrestling and tumbling around with a big ol' thing, and Poppy is a great combo of super excited/playful but unfailingly gentle and careful around them.  (I also have photos of Poppy sleeping with and being bottle-fed by toddlers in her foster home...very very sweet but um, sorry I took ur puppy babies.) They love to lay on the floor and spoon with her, so I expect when she's full-grown she'll graduate to just being the mattress. 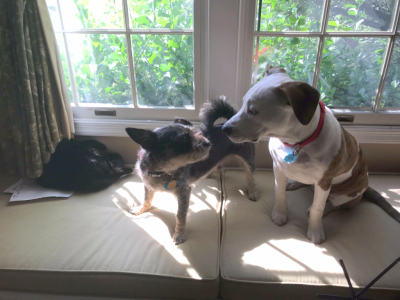 The cats are like, whatever. They're on a diet right now and pretty pissed about that. Poppy they could take or leave, especially since they haven't figured out how to steal her food.

It's been a lot of work and it's been a little hard to concentrate and focus with all the wrastlin' and tusslin' and potty breaks and what's in your mouth Poppy drop it drop it, not to mention the constant urge to join in the play and rub sum bellehs all the time. I will try to talk about something else tomorrow, promise. 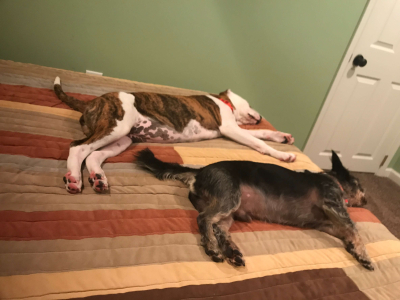 Please don't talk about something else. Dogs and cats are where it's at!

Yes, so loving these posts!

Cute, cute puppy pics. What a sweet face. For some reason I thought she was past the puppy stage. How old is she?

We are not sick of puppeh and kitteh stories! Although.....you DID say something about a tattoo!

Specklemutt is my favorite nick-name so far! She's adorable and I can't get enough adorable pics of her face (and the other fur babies too)! She was just waiting for her family to come, and you did!

Please don't stop this stream of happiness to our minds just yet. As my five year old would put it, just one more episode please.

no, don't ever stop with the talk/photos of her! :)

our 2nd rescue (buffy) has the whole barrel shaped belly going on, but the vet told us it was probably b/c she'd had puppies waaaaaaaay too young so we just went along with that since it made as much sense as anything. now that i'm seeing specklemutt's puppy pics? i'm not so sure!

Early 2016 my then 16 yo pitty was going downhill fast. Even with the other 2 dogs I had it seemed like it was about to be his time. Fast forward a year in which I moved in with the bf and his two kids, my old pitty had come back to life. The constant attention from an 8 year old boy who snuggles and wrestles and kisses is good for his old soul. He crawls in bed every morning to spoon and pretzel leg with the boy.

The only time you will regret having a large dog is when she figures out she can reach the counter and steal a steak. Otherwise she will be a gully, a blanket, a mattress, a friend to tell secrets to, a protector from monsters, and a doll to dress up. The perfect companion for your growing boys.

My 50lb dog still sits in my lap exactly how he did when he was a 10 week old puppy :D

Love, love, love the puppy posts! If that's what's on your mind, keep 'em coming, pretty please!
Big dogs are the bomb. Our nearly 80 pound boy lets my teenagers (adult-sized, both of them) do anything to him. With very little reaction, if any. Use him as a pillow? Sure, he doesn't mind. Sit on his foot by mistake? No big deal. Steal a toy right out of his mouth? Hey, that's cool. As a bonus, he (the dog) seems to think it's funny to bump my ass with his head when I'm bending over to pick random crap up off the floor. Keeps me on my toes, he does.
I'm so glad Poppy is fitting in well. She's very cute!