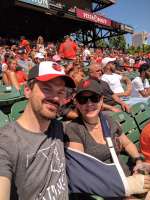 (HA HA SUCKERS, of course Imma talk about my stupid elbow.) Another week, another doctor's visit, X-ray and this time, a bonus ultrasound. We can now add "tricep avulsion" to my diagnosis, which basically means my tricep muscle cracked off a tiny piece of my olecranon (aka ye olde nubby pointy bit) in what I like to imagine was a fit of super-strong tricep Hulk rage. Also I have a HUGE hematoma under there too, literally bigger than all the elbow bones put together, so I look forward to watching my elbow turn 500 different shades of purple in the weeks ahead. It'll be like watching the eclipse all over again! SEGUE TIME. Here is my elbow out in the wild. Please note my ability to hold a beer remains unaffected, blessed be to the alcohol gods. A friend of ours scored us three kids' vouchers for free Orioles tickets for them and deeply discounted tickets for us, which meant we could take the money we saved on tickets and blow it all on hats. Lesson learned, do NOT wait to panic-buy five hats at the baseball stadium because you didn't pay attention to where your seats were and anticipate... Read more →

Total Eclipse of the Elbow 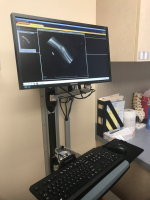 Hellooooooooo. It's been a week. A magical week, full of much learning about elbows and why you should not break them. Also, there was an eclipse, that, I dunno, I was personally pretty underwhelmed by. I watched an orange circle slowly get covered by a black circle and the world was not plunged into dramatic darkness. It maybe got a little extra shadow-y for a minute? Maybe not even that? Did I miss something? Am I dead inside? Should I go back and edit out at least three commas from that first sentence? (Answer to all those questions is yes, probably.) Anyway, I hope everybody's eyeballs are fine (with maybe one exception). Now back to my elbow, which is NOT fine, but could be worse, because damn, elbows are complicated. Amy's Elbow, Inside & Out A follow-up with a orthopedist confirmed that yes, I fractured the nubby pointy bit of my elbow, also known as the olecranon. Which sounds vaguely science fiction-y. The good (?) news is that the break non-displaced: the nubby pointy bit is cracked but still intact, and the crack is lined up nicely to heal without surgery. Although my very cheerful doctor very cheerfully informed me... Read more →

Well, we are back. I have to admit our big attempt at an off-the-grid vacation did not go exactly as planned, but my commitment to (mostly) staying off social media was probably a win for all of y'all, as you were spared an AWFUL lot of complaining. It started with this, the evening before our flight to Cancun. We'd been gloriously clueless, right up until we arrived at my Weather Channel-watching in-laws' house with the kids. By the next morning, the potential tropical cyclone seven had been upgraded (downgraded?) to Tropical Storm Franklin, a truly terrible name for a storm because we all know Franklin is a whiny little bitch. But it looked like our flight would get there a few hours before the worst of it, and while we'd likely lose a day to rain, Cancun wouldn't get hit TOO badly. As long as we got there, we agreed, we'd be fine and make the best of it. And we did get there! Right on time with the sun still shining! We managed to hit the pool, beach, outdoor restaurant, two swim-up bars AND a jacuzzi tub before the first of the raindrops started to fall. And fall. And... Read more → 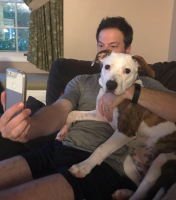 Misting fans? Check. Cooling towels? Check. Passport wallets? Check and check. Cute new bathing suit? Hellzyeah check. 400 dozen bottles of sunblock? Check check checkity check. Laptop? Naaaaaahhhh. Next week is our 19th wedding anniversary. And while we originally planned to "save" a big special vacation for our 20th next year, we ended up changing our minds. After all, 2017 marks 20 years together, which should also count for something. Also, both of us really, really need a vacation. A real one, sans kids, without a work meeting or two squeezed into the agenda to justify the expense, or a trip sponsor/brand to satisfy with a quota of blog posts and regular properly hashtagged social media check-ins. A vacation where BOTH of us leave our computers at home and go completely off the grid, un-damn-reachable, do not bother me, I do not care if your website is on fire. So that's what we're doing. We're going to Mexico. I am going to see some pyramids. I am going to lose my ever-loving archaeological-tastic mind. What I won't be doing? Blogging. Checking social media. Reading the goddamn news. I've turned off my breaking news alerts (aka my Outrage Attack Dailies) and... Read more →

HAIRZ ALIVE, DAMMIT (It's a Miracle!) I took Ike to see my hairstylist yesterday, who wasn't super optimistic she'd be able to do much beyond a very close clippering, but was determined to at least TRY to keep Ike looking as much like Ike as possible. (Shoutout to Kiera at Bombshell Salon!) Every other stylist in the place looked at him and said to me, "oh evvvvvvvvery kid does it, I swear." Then they turned to him and said, "I bet that was pretty fun though, right?" A quick reminder of the before: (For both state of his hair and general mood.) And now! The triumphant after: A little bit of genius, a little bit of witchcraft... ...and yep, a little bit of Trumpian combover. It'll likely require some product until those front bits grow out to keep the camouflage in place, but I think we can do that. He's incredibly happy and relieved and really quite pleased with his new look. "Don't I look SO CUTE AND GREAT?" he asked his brothers as soon as we returned. (He still thinks he's going to let it grow back out, though. After rejecting all the short hairstyle inspiration pics I showed him, he asked me to Google... Read more →

The End of the Hairz 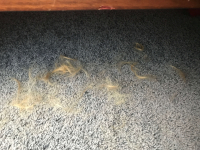 I was down in the basement finishing up my workout when Ike appeared at the top of the stairs. He said he had something to show me. "You'll never believe this, Mom," he said. "Now that I'm six years old my hair is different." My stomach sunk. I turned around. It sunk even more and took my heart with it. "OH IKE," I shrieked, "OH NOOOOOO. WHAT DID YOU DOOOOOOO?" I knew what he did, obviously. He'd gotten the scissors (again) and cut his own hair (again), but this time it wasn't just one small random snip off the top. He'd hacked his bangs off entirely, almost to the roots in some places, and taken off large random chunks around the sides of his head. Only the long, straight locks in the back were untouched. I more wanted to know WHY. And of course, the unanswerable, perpetual question of CHILD WHAT WERE YOU THINKING. "Did you want your hair short? Because we could cut your hair short! Oh, Ike, why why why did you do that?" "No!" he responded, shaking his head and looking slightly stricken, "I still have long hair! I just wanted to make the front look cute... Read more →