Well, we are back. I have to admit our big attempt at an off-the-grid vacation did not go exactly as planned, but my commitment to (mostly) staying off social media was probably a win for all of y'all, as you were spared an AWFUL lot of complaining.

It started with this, the evening before our flight to Cancun. We'd been gloriously clueless, right up until we arrived at my Weather Channel-watching in-laws' house with the kids. 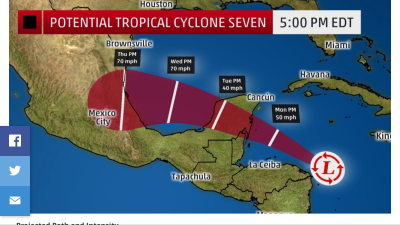 By the next morning, the potential tropical cyclone seven had been upgraded (downgraded?) to Tropical Storm Franklin, a truly terrible name for a storm because we all know Franklin is a whiny little bitch.

But it looked like our flight would get there a few hours before the worst of it, and while we'd likely lose a day to rain, Cancun wouldn't get hit TOO badly. As long as we got there, we agreed, we'd be fine and make the best of it.

And we did get there! Right on time with the sun still shining! We managed to hit the pool, beach, outdoor restaurant, two swim-up bars AND a jacuzzi tub before the first of the raindrops started to fall.

We were hustling back to our room when the sky truly opened up and dumped an EPIC amount of rain over everything and everybody. Jason raced a bit ahead to duck under the temporary cover of a bar (which was still open and serving, natch), while I padded behind in my flip-flops.

And that's when I hit a puddle, skidded and hydroplaned for a few confusing seconds, and then BAM, wiped out and fell. I landed badly, with my right elbow taking the full force of impact.

It's very painful and awkward to type, so I'll just get to obvious point: I broke my fucking elbow on the very first night of our vacation. 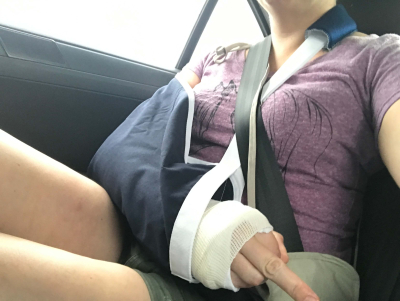 Two things I am grateful for: One, it's just a hairline crack/fracture and nothing that will require surgery. Just another two weeks or so in a splint that runs palm-to-bicep. Two, the emergency room care in Cancun was honestly better than any experience I've had stateside, and WILDLY STREETS AHEAD of the horror show that was the Las Vegas ER. Seriously, if you're looking to get injured on vacation, make it happen in Cancun. Maybe I should write a guidebook.

(We had to pay upfront [$600 for an ER visit, x-ray, and splinting/bandaging = not bad!] and file for reimbursement through our insurance, though we're also in talks with the resort for some restitution as hi, putting down a path of rubber mats over already-slippery tile in time for a storm that was predicted down to the minute wouldn't be a bad idea next time. People kept coming up me all week to show me their bruises or regal me tales of their sore tail bones from falls on wet surfaces of their own. I was just the only idiot who broke something.)

(People also kept asking me if I'd been given any "good pain meds." I kept disappointing them because no, just some Ibuprofen.)

(Though after stopping at a farmacia, I learned that Mexican Ibuprofeno is the size of a giant prenatal vitamin and is dosed at 800 mg a pill. Niiiiiiiiice.)

Third thing I am grateful for: My elbow did not stop us from taking an amazing private tour of Chichen Itza, a place I've wanted to visit for as long as I can remember. It did not disappoint, at all. 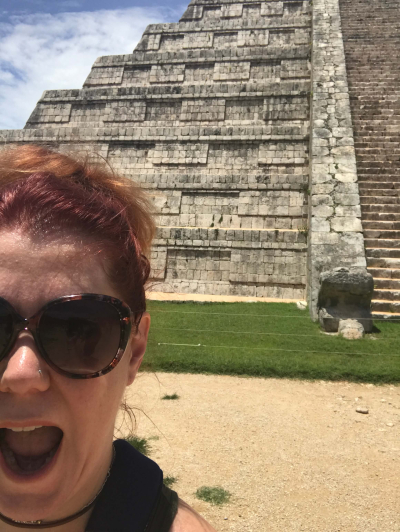 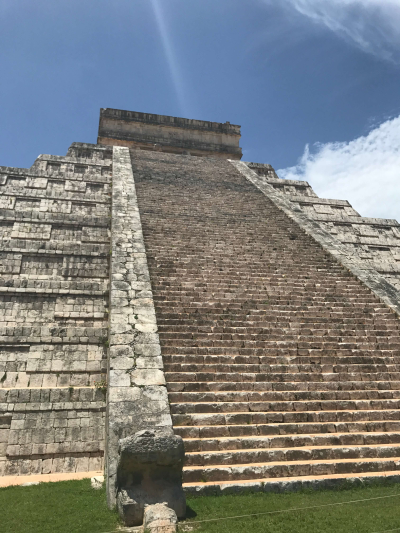 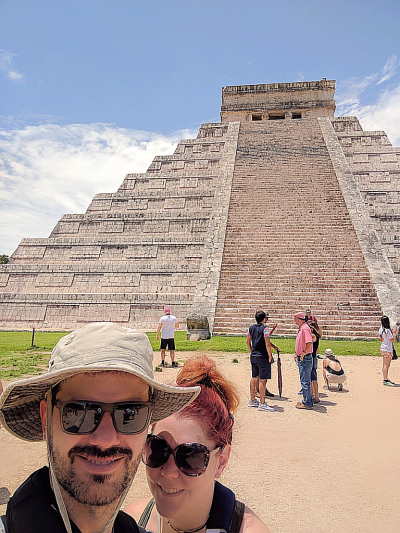 I'm seeing an orthopedist for follow-up later this week, so for those of you who are more into photos of injuries than pyramid pics (hey no judgement), here's what things looked like last night when Jason kindly re-wrapped my splint with some fresh, non-filthy-and-shredded gauze: Lovely! But mostly impressed with my pasty lack of a reverse farmer's tan.

oy! sorry to hear about the Vacation Fall but Chichen Itza is AMAZING, no? we climbed to the top and I was struck by two things -- those Maya had wee feet (the stairs were so shallow, my big Amurrican feet had to go sideways and at the top, wow, in the US there'd be a guard rail or rope or security warning you away from the edge -- it's HIGH and dangerous albeit with a great view

next time, try Playa del Carmen just south of Cancun or take the ferry across to Cozumel -- great places to vacation, with or without the kiddles

My mom fell and sprained her wrist in Cancun (while on a day trip to Isla Mujeres), and they took such good care of her. I think the resort we were visiting was like, "We do NOT need this lady to sue us!" Even though it was just her passing out from the heat.

I'm so sorry you fell and broke your elbow, and I'm super glad you and Jason still managed to have a good time, but can I selfishly tell you I'm really happy you're back??!?!?!? #amalahswritingmakesmehappy

ugh, so sorry about your elbow!
I am literally in the middle of researching a trip to Mexico for my family in April so I hope you'll do a reviewish post once you're back up to full typing strength. I was looking at both Chichen Itza and Coba and had just about decided we'd go to Coba but now I'm intrigued.

Hahaha, on our first post-third baby vacation, my husband and I went to Cabo and didn't find out until the plane ride there that a hurricane was due. We got to the resort just in time for the mandatory hurricane meeting and then everything was on lock down until it was over a day or two later. Then we had a few days to hang out in a town that was torn to pieces (all the bars and restaurants were closed because the windows and everything inside had been shattered, the a/c and plumbing at the resort didn't work for a day and a half, the pools and hot tubs were all closed because they were full of mud) and then I think the FINAL day the sun came out and everything was operational. It was an impressive story, I suppose, but hands down my worst vacation ever ;) And speaking of broken elbows . . . my sister just broke BOTH of hers at 39 weeks pregnant (in true Amalah fashion, she somehow managed to trip on a rake even though there was just about nothing else around her!) and she didn't get so much as a splint! So she went through labor (and re-injured them during the process, as you can imagine) and then had to figure out how to not continue injuring them while taking care of her first baby (AND they were in the process of selling their house, so they kept having to clean up and leave the house at a moment's notice when people wanted to come see it. That girl deserves a goddamn medal for still being alive!) ;)

The Franklin reference made me LMAO! My daughter is now 15, but oh how I remember that whiny little bitch! HAHAHA

I'm S sorry you broke your elbow, butThe fact that I can see the "and yet she persisted" tattoo in that last shot made me snort with ironic happiness though!

And please please please do NOT stay in Playa next time... stay in Tulum! And then you can tour the ruins at Tulum close by! It's fab and not as overdeveloped like playa these days. We just got back from Akumal 2 weeks ago... oh how I LOVE Mexico!

I broke my tailbone three years ago on the day before we were leaving for Japan to fulfill my late mother in laws final wish and return half of her cremains to her hometown to be placed in her family crypt. (The rest of her us with dad at Sarasota National Cemetery, so she could keep an eye on him. Yes! She said that!)
Anyway!
I schlepped my broken self all over southern Japan for 11 days. Came home, went to my PCP and XRays showed it was broken. Not fun, b7t I would do it again in a heartbeat.
Glad you bwere able to go on and have a good time. Now, take it easy and heal.
And you WERE missed!

Oh man, I dunno if misery loves company or not, but my sister broker her foot on her first night of vacation in cancun with her twin 3 year olds. Had to wait until morning for her friends in the next hotel room over to find her, and then had to have surgery in Cancun. All is fine now a couple years later, but... she also was remarkably impressed by the Cancun ER, and the surgery was -- according to the US orthopedist - really well done. This must happen...fairly often!

:( so las vegas is streets behind

My mom broke her arm the first night of a two week tour around the UK. That's just vacationing on Expert Mode! Heal quickly!!

Sorry about your elbow, but I'm loving that you are flipping the bird in that first picture. 😂 Glad no surgery is required!

Fucking rain, man. I slipped on a wet sidewalk grate on my way to the subway on Friday morning and busted open my knee. 9 stitches. Yay. I'm glad you didn't let a broken elbow slow down your vacation!!