(But first, an elbow update: Good tidings and huzzah! My latest x-ray revealed enough healing for me to ditch the splint and sling and focus on getting my range of motion back. I'm not allowed to lift anything heavier than a cup of coffee [official doctor's orders] and it's still pretty painful and gimpy-stiff, but my arm is freeeeeeeee from the mummy wrappings and I will definitely not need surgery. I am currently taking bets on how long it will take the five gloriously long fingernails I managed to grow during my weeks as a one-armed lady of leisure to break off. I'm guessing I'll lose at least one by the end of this post.)

As I mentioned earlier, I somehow got talked into attending the Maryland Renaissance Festival/Faire thing on Monday. It's...not really my thing, to put it mildly, but I figured the kids would like the jousting and at the very least I know I enjoy watching both Shakespeare and people letting their nerd flags fly. And beer. There is beer. This is an acceptable outing. 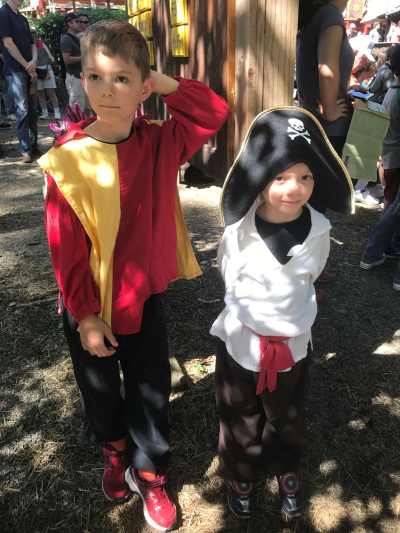 These outfits are also acceptable. Ike brought the hat from home and we rented the rest of the pirate garb. And you gotta love Ezra's mail-order-catalog-casual posing in his "Brave Young Squire" ensemble. 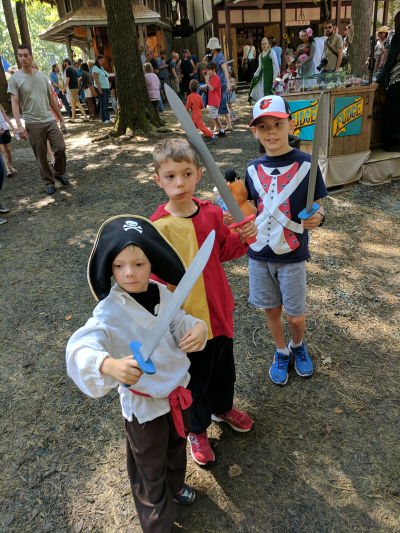 Noah, as usual, had his Own Thing going on that day, but happily joined in the "let's all buy pointy wooden swords and spend the day swinging them into crowds what could possibly go wrong" action.

You may notice Ezra clearly has a huge mouthful of something. That was pretty much a constant state for him. 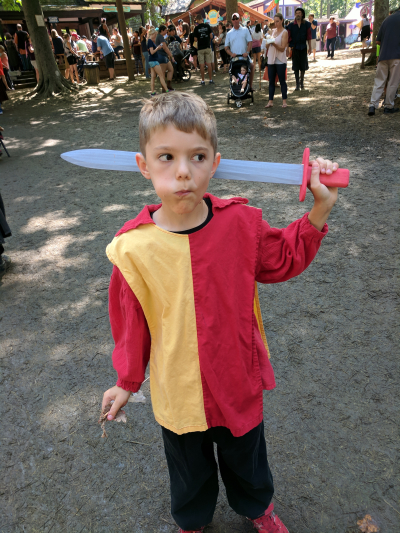 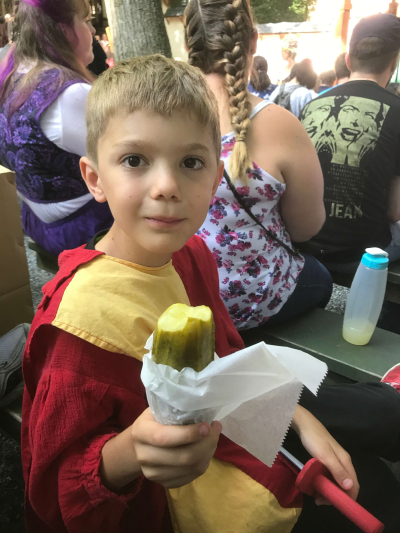 (Other foods consumed on sticks that day: chocolate-covered cheesecake and deep-fried macaroni and cheese.)

(That last one may have just been by me.) Ike's Face = also me, as this was around the time we realized all the beer stands had really long lines and were cash only. 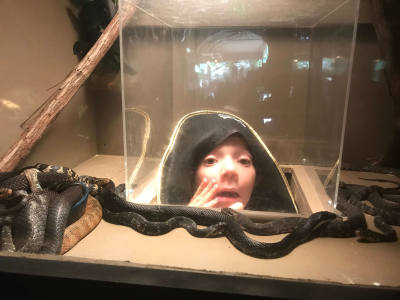 Ike's Face, a Series: In which he slowly realizes that maybe you shouldn't just rush to stick your head up in a clear plastic box in the middle of a reptile exhibit without asking a question or two. 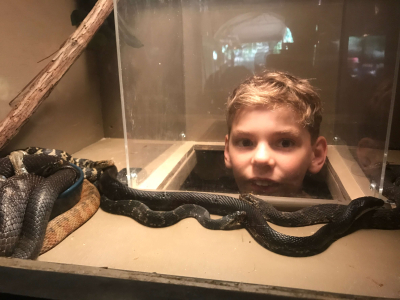 Noah didn't mind it; he thought it could've used a few more snakes and preferably rattlers. 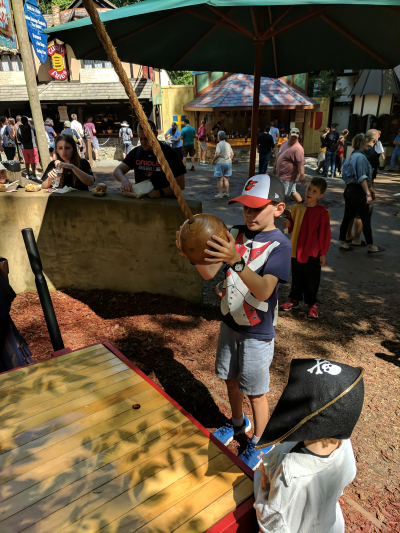 Unfortunately, since Monday was, YOU KNOW, Labor Day, it was so beyond incredibly crowded that we never got anywhere close to the jousting and I couldn't hear any of the Shakespeare very well, so we mostly just wandered around spending money on things.

Including this, which was the only option for a dumb girl who forgot to bring a clip or hair tie and just wanted her hair out of her face and off her neck and was desperate enough to spend $19 making it happen: 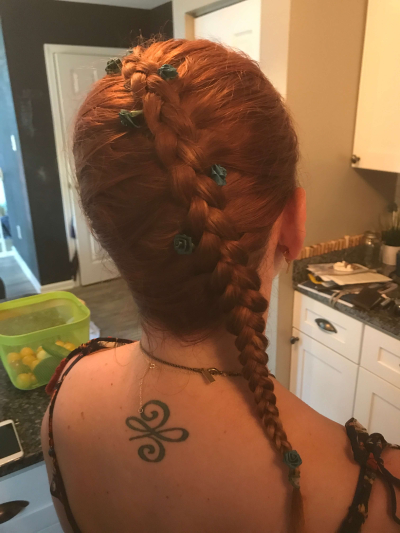 I think the idea is that the braids are supposed to last for a few days at least, but my unique sleeping style of "burying head under extra pillows and sleeping with all the covers on even in the summer" managed to ruin it by morning.

(Snakes alive I still have all my nails! I should probably stop while I'm ahead. Except that wow, typing with long nails might be even more annoying than typing with a broken elbow. How do you proper ladies who know How To Girl do it??)

My nails are pretty strong and I've found my magical length that doesn't get caught and break off all the time, which has created grooves in my keyboard from typing with long nails.

I also sleep with a pillow on my head. Good to know I am not alone in this quirk. I even told my husband that if I ever get put into a nursing home, write it in my care plan.

I love Mighty Zah. And your hairz! That was the ONE thing I loved about my long hair. My hairdresser would always French braid it for me. I, on the other hand, could put it in a pony tail. Which is why it's now short. Glad you are slingless. Hope you can keep your nails for a few days at least.

I am running a little behind this week, so I am still snorting over the previous post, including Denise's comment (for the Clueless reference). Thank you for sharing :-D

Also typing with long nails is hella annoying to those around you - if you work in an IRL office. I have a coworker who luckily quit with the fake nails because we moved to smaller shorter cubes and imma bout to kill her.

Don't feel bad about missing the jousting - it isn't the same this year. They did away with real jousting and it's completely scripted. Medieval Time's jousting is more authentic than Renn Fest's jousting this year. It's.... sad, really.

I love the braid!