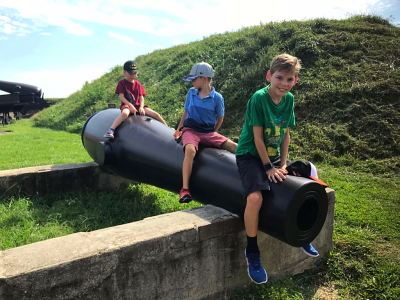 If you ask him how middle school is going, he'll say: "It's fine. It's long." And yet he still auditioned for (and was accepted into) the afterschool jazz ensemble, which he says "flies by so fast" because he likes the "jazzy music" and because his saxophone "is like, the main character of jazz."

He's tall and lanky and huge and handsome and at least a couple girls have noticed, but he's not interested, no, ew, stop. (But don't you dare say things like girls can't game or code or use "throw/play/scream like a girl" as an insult because you will get an earful.) The kid who couldn't stand Halloween is now begging to go on ghost tours and jump-scare haunts. Next week he's going away on a two-night, outdoor education field trip with his class and I'm the only one who's even remotely stressed about it. "It'll be fun. All my friends are going."

He still asked for a Lego set for his birthday, but probably mostly because he hasn't realized he can ask for gift cards to Steam yet. The Lego obsession is slowly giving way to video games and drawing comics and YouTube, though he still likes to spend the occasional afternoon constructing a massive 3D version of some video game building/map/world down to the tiniest detail. His capacity for memorization amazes even me, the person who can still quote at least nine seasons of Simpsons episodes practically verbatim. His love and passion for American history is as strong as ever, although he recently got into his first polite but heated political argument with his grandmother.

"I don't know where she's getting her news," he said later, shaking his head, "but I really wish she'd change the channel."

Happy birthday again, buddy. You gotta stop with this, because it's also flying by so fast.

Have you taken him to the American Revolution museum in Philly yet? It's amazing!

Oh my stars! "I don't know where she's getting her news," he said later, shaking his head, "but I really wish she'd change the channel." This applies to so many of us and our relatives, Noah!

You REALLY need to dust this room, Amy. My eyes are all watery from it, and I don't have dust allergies.
HOW can he be 12? Hell, how can my Favorite Oldest Nephew gonna be turning 27 next year?
I hope 12 is the best 12 any 12 year old ever had. If anybody can rock 12, Noah sure sounds like he's off to a good start.
Happiest Birthday wishes to your (whispering) almost teenager!

Why use words when emojis suffice. 😢😍

That’s exactly what I say about MY mother and HER news! He’s wise beyond his 12 (TWELVE!?) years, that one.

OMG, you buried the lede, and now my throat closed up, and my eyes are watering, and--geez, how can I be so attached to this family I never met? Because of your writing, that's why! Congrats to Noah!

Happy Birthday Noah! I hope you have your bestest year yet!

"I really wish she'd change the channel" made me spit out my coke (must go clean my desk now, lol).

As a loooooong time reader, and a mama, my heart is just BURSTING!!!!!!
Happiest of happy birthdays, Noah!!! You have no idea how many random people all over the world, whom you've never met, just love you to pieces and are so proud of the awesome human you are and continue to grow into. Keep doing you because it is something pretty special!
❤️🎉✨❤️

Happy birthday, Noah! You are amazing <3

Twelve? TWELVE?!? No way. And in Middle School? I swear he should be just a tiny thing still...

One does not grow out of legos. Legos are forever.

Every year. Every year your kid turns the next age and I can't believe that'll be my kid in a few months. Happy birthday, Noah.