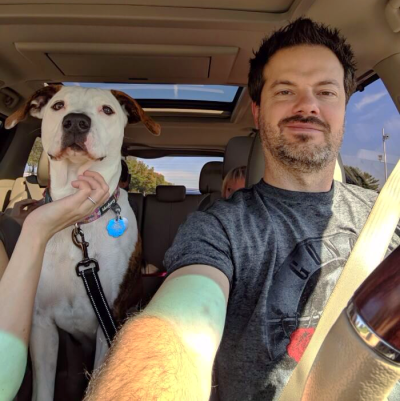 Miss Poppy started obedience/doggy manners training a couple weeks ago, and already she's well on her way to being the valedictorian of Dog School, and only SORT OF because there's only one other dog in the class.

Honestly, Beau probably needs training more, but it was part of our adoption agreement with Poppy's rescue because she was still a puppy. (We had to pay an additional $50 deposit that we get back once she's completed a properly certified/acceptable training program.) She's a good girl but a big strong girl who already has 20 pounds on Ike and can knock him flat with an overly-excited greeting.

Beau gets a free pass on those same not-great behaviors because he's so small. He pulls on the leash during walks but like, nice try, pipsqueak, behold my SUPERHUMAN STRENGTH. Poppy sees a squirrel and I'm like, PLEASE CHILD I HAVE A WEAK ELBOW NOOOOOOO.

Likewise, Beau jumps up on people and it's like, "Awwww, look at the little Ewok Toto standing up on his hind legs and bouncing around like a coked-up kangaroo! That's so adorable!"

Poppy does the same thing and I end up looking like this: 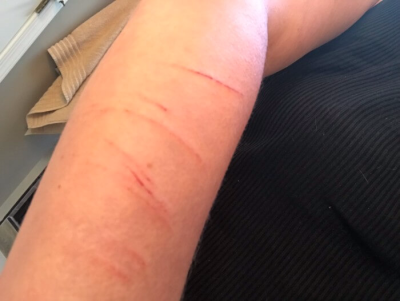 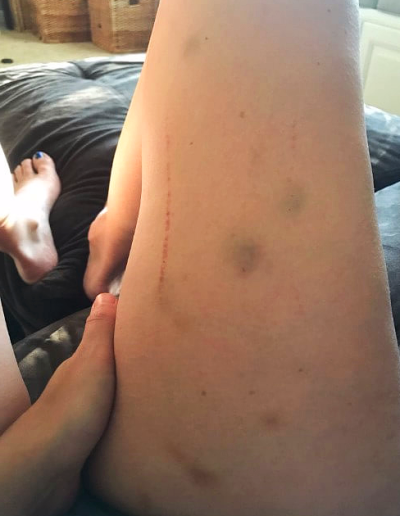 None of it's aggressive, of course. Just HI HI HI HEY HEY HEY ME ME ME YOU YOU YOU PET PET PET NOW NOW NOW with that rock-hard head and those big ol' paws and nails that she let me trim but then rebelled against any filing so they're like razor-sharp...uh...razors attached to her feet.

The dogs definitely mimic each other, in both good and naughty ways -- when Poppy first arrived she never barked or jumped up on people but quickly picked up both habits from Beau. On the other hand, having an already house-trained dog around DEFINITELY helped us speed that process up with her. And Beau is already picking up on a lot of the hand commands Poppy's learning because WAIT WHY IS SHE GETTING ALL THOSE TREATS I WANT TREATS WHAT LIKE LYING DOWN IS HARD OR SOMETHING LOOKIT I CAN LIE DOWN TOOOOOO.

But minor behavior quibbles aside... 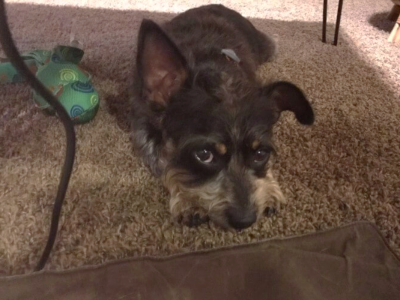 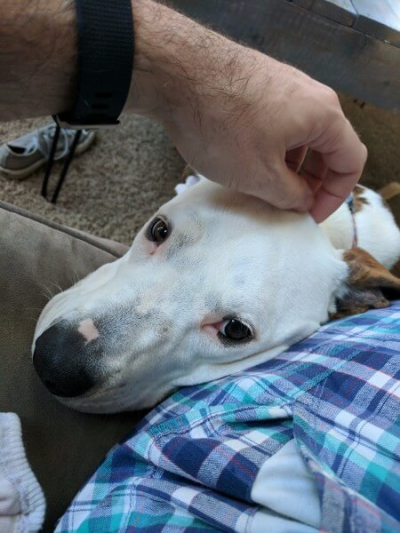 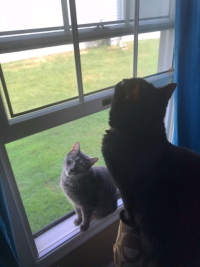 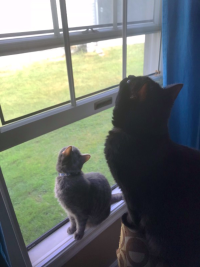 (They're good cats, too. But in that special cat asshole-y way.)

I can completely relate as I own one sweet but "has no idea how big she is" block headed beauty as well. Good Girl, Poppy! No doubt she would still be valedictorian even if there were 50 (other good dogs) in the class.

I am not sure whey I am saying this but I guess this post was the tipping point - you and you family really seem to have way more injuries, bruises, broken bones, illnesses and other issues than my family (two teenage boys, two cats and a dog) or any other family I know!

I have a similar puppy, and I describe her as ‘aggressively cheerful.’ She is just SO HAPPY AND SO SO EXCITED to see you! YAAAAAAYYYYY! I have the same exact bruises and scrapes!

Oh yes, we have a I'M SO SO SO HAPPY TO SEE YOU OH MY GOD YOU CAME BACK DIDN'T SEE THAT COMING AND DID I MENTION I LOVE YOU HAPPY HAPPY HAPPY GIRL 60 pound doggo! She is so sweet though. We haven't gotten training yet... what? She's only TWO. Sheesh. :)

I have two Staffies and they were both the stars of their obedience classes - they are such smart dogs! I never even worked with them at home as much as I should have but they remember the commands every time I use them. The youngest was a crazy ball of energy and now that she has hit the age of three that has finally calmed down, so you have that to look forward to!

Hi Amy, a quick nail trimming tip for you. I have found if you trim their nails right after a bath, the nails are a little softer and easier to cut and they do not get that same razor sharp edge.

We have a year old lab/catahoula mix. Sweetest dog ever, and she LOVES us so much. But after 2 rounds of puppy kindergarten, we are Novice class dropouts. She was way way too social to pay attention in school, and SQUIRREL. She's great at home, knows commands, etc, and is well, ok, on most of her walks, until there is that SMELL that just has to be sniffed and sniffed and rolled in, and OMG, here comes my NEW BEST FRIEND walking their human down the street and can we be best friends forever and ever and ever? And I want to be best friends with your human too, jump jump sniff sniff.

I take her to the groomer every 3 weeks or so to get her nails done. She sits on the floor, paw extended for her mani/pedi, and even lets the groomer use the dremel. Best $12 in less than 10 minutes I can spend.