The Kindness of Internet Strangers

When we last checked in on Ezra's beloved Hobbes, he was not doing so great. 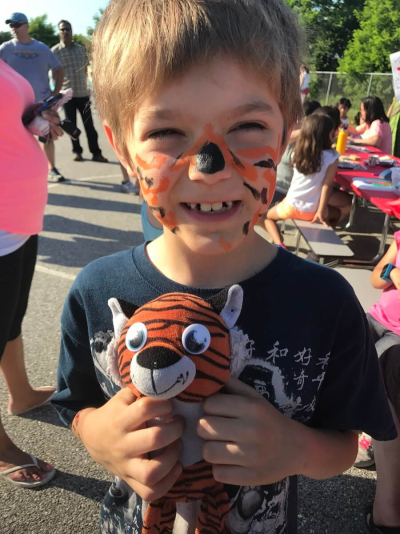 SHOCKINGLY, his condition has not improved over time. He is worn and threadbare, his body covered in holes and his painted eyeballs faded into plain white plastic cataracts. Considering he's like, a 25-cent toy from a Dave & Buster's claw machine that Ezra takes everywhere, it's probably a miracle he's held on for this long. But still, I asked if anyone knew where I could procure a replacement Hobbes-like tiger. 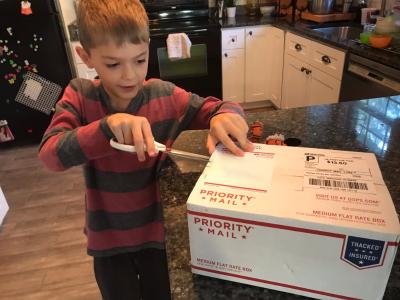 Well look what just showed up, right in time to go trick-or-treating tonight with Calvinz and his red wagon: 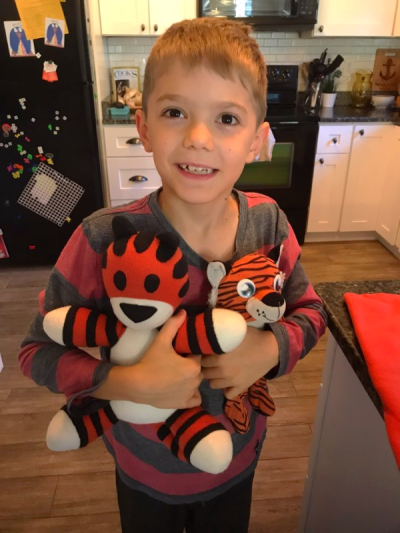 Everybody say hi to Hobbes II!

Thank you so so SO MUCH to reader Michelle for kindly and generously donating her time and mad sewing skills to make this adorable Hobbes for Ezra. (WHO IS SO THRILLED TWO HOBBES THAT'S TWICE AS MANY HOBBES GUYS!) He carefully packed him in his backpack last night for today's school parade, then snuck back downstairs to retrieve him because "Hobbes I is having trouble sleeping without his buddy."

(Also last night: "Hobbes I is staying home tomorrow because he says he's too old for parades.")

(Also this morning: I went to take a photo of the state of present-day Hobbes I, only to discover that he is nowhere to be found. I now suspect that both Hobbes I and II went to school today for the costume parade.)

Ike is going (again) in the Woody costume I technically bought him for his birthday, a tradition I hope to continue because DANG costumes are a hell of a lot cheaper in June than October. We lost one of the boots but still. A remarkable showing of Halloween preparedness and organization, for us anyway.

Noah is going (again) as Marty McFly, and although there's technically no costumes allowed in middle school, Noah wore most of the components anyway. "They're just clothes!" he declared gleefully. "I can totally get away with it."

(Please to pause and consider that this super-rigid child, who once wanted nothing to do with costumes or Halloween in general, is now actively subverting rules and fighting for his god-given Halloween right to be Marty McFly during math class.)

Jason is going (again, OY WITH THE RERUNS ALREADY) as Negan from The Walking Dead, because dressing up is super easy when you don't have to change anything about your face or head. He managed to find a more authentic Lucille bat although I gotta admit I do kinda miss the whiffle bat and bloody eyeball DIY job from last year.

I'm going as Eleven from Stranger Things, along with literally everybody else who bought the same dress from Hot Topic as a joke last year and then was like, "Oh, that's easy." 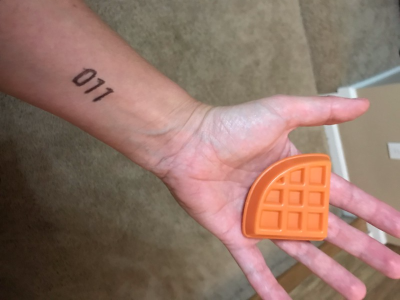 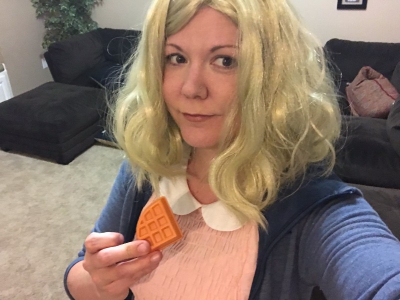 Just needed socks and a wig and a waffle swiped from the play kitchen. I planned to add the blood trickle but was having really bad allergies on Saturday and decided maybe a theatrical nosebleed wouldn't mix very well with actual sneezing fits. (My costume still got high marks from a drag queen at a Rocky Horror showing, though!) I'll try again tonight when we once again show up to our neighborhood block party as the only grown-ass adults who show up in full cosplay mode. You know, just to weird everybody out the day before we send out invites to Friendsgiving.

What can I say? IT IS JUST OUR WAY. 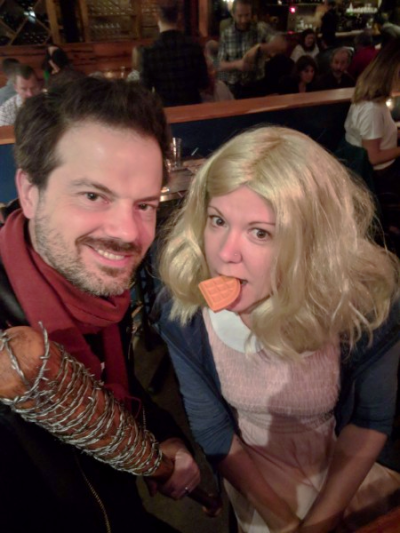 I don't watch tv much anymore so I am blanking on your costumes this year. Super proud of your eldest. I remember when he would only dress as Steve from Blue's Clues. And I loved it the year Jason's costume was from that movie about the aliens in South Africa? District 9? He even had the perfect ID badge and the alien arm. Classic!!

"God-given Halloween right to be Marty McFly during math class" is pretty much the best thing to come off the internet.... rock on, "rule" breaker Noah!

Yay Hobbes! Yay Noah! Yay for adults dressing up! I"m dressed as a flapper at work today. My boss is the green giant and HIS boss is dressed as Mario! The big boss (dressed as Mario) LOVES Halloween and she gets into it every year, allowing the rest of us to let our inner child run free!

That Hobbes is adorable and perfect, and reader Michelle is awesome for making it.
Could not love more that Noah is totally into Halloween now and 'breaking' the rule about costumes.
You guys look terrific. The plastic waffle is hilarious.

I was wandering around as Jareth the Gobling King and my 14 month old was Toby from the Labyrinth. What is the point of trick or treating with the kids and going to all these silly parties if you don't get to play too?

We went full on nerd family with the 11th Doctor (with the fez, of course), a Dalek, and a Cyberman. It was by far the most work I’ve every put into Halloween costumes.