Me, all year: Oh yeah. we host a big Friendsgiving thing the Saturday before Thanksgiving. It's really fun. You should come next time!

Me, the week of Friendsgiving: GAH GAH GAAAAAAH WHY DO WE DO THIS GAH GAH AHHAGS GAHAHAGA JPFNZCMZXC,M.CZXLDFJD

We're up to three turkeys this year. One roasted, one deep-fried and now, one smoked. Jason is making the stuffing, I'm doing boozy cranberry sauce and gougeres. Ezra is handling the sweet potatoes and the other two are whining about all the Doritos and Capri Suns that I've told them they aren't allowed to have yet. I need to figure out the logistics of two pies and a cheesecake sitting in our freezer and of course, clean all the things and declutter all the surfaces.

Last week my therapist (BOOM) (THAT HAPPENED) asked me if there was anything in particular stressing me out about the party and I said, "the stupid fucking bookcase in the living room."

So, back up. We impulse-bought an Ikea bookcase instead of a proper TV stand/entertainment unit right after we moved in and almost immediately regretted it. It was too big and didn't really go with anything else in the room. But we never replaced it because...I don't know. I'm sure we had our reasons, most of which were laziness. We recently decided to move the TV out of the living room to the family room, and I was adamant that the bookcase would NOT be joining it.

I had plans to turn that wall into a homework/computer station for the kids, with three  little desks and three cute chairs and lots of little organized...um...pencils and shit. Big plans! I was Pinteresting up a storm! Then I measured the wall and realized we'd have to custom build something, most likely, especially given that my budget for this project was like, five dollars.

So you can guess how quickly we got busy with THAT. The bookcase stayed put and emptied of most of its contents (which, to be perfectly honest, was mostly crap I unpacked and didn't know what else to do with, then NEVER touched again). The rest of the wall was bare and full of holes from several different attempts to mount the TV correctly. The whole area just looked unused and weird.

And this, dear humans, was causing me to wake up every morning in a panicked state of dread because people were going to come to a party in my home and be like, "WTF is with that stupid fucking bookcase."

Of course, I recognize this thinking as anxiety-fueled bullshit. It's just a stupid fucking bookcase. On a scale of one to getting nuked by North Korea, it should rank pretty low on the whole things-to-irrationally-worry-about scale.

BUT UGH. THAT BOOKCASE.

The other day I was digging around in the storage area and came across a desk I'd completely forgotten we still owned. I swore I had a memory of it breaking at some point, but there it was, unassembled but fine, with all the hardware taped to a leg. I dragged it upstairs, put it back together and set it next to the bookcase. Then I went back to the basement and dug around some more until I found an old wooden folding chair. I then repeated the process of wandering around the house and grabbing random things (pictures! baskets! Harry Potter books!) a few times. 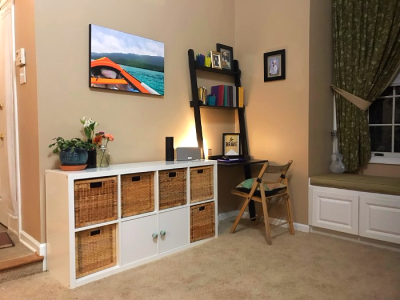 Behold, our totally-on-purpose homework nook that we totally planned. It cost zero dollars because I stole literally everything here from some other part of the house. 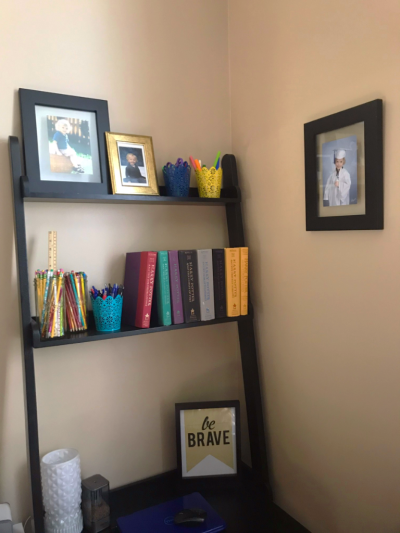 I'm sure the novelty will wear off but for now they LOVE it. They take turns pretty well, and I realize my original three kid/three desk plan was kinda naive, as there is NO WAY all three of them could sit that close to each other and actually do homework without kicking/hitting/distracting each other. Plus the baskets hide the boys' music books and instrument accessories, extra school and art supplies, and dog/cat toys. The door sections hold all their various electronic devices and a charging station. I swapped out the original handles for some pretty blue glass ones that I bought for the bathroom and then didn't use after all. 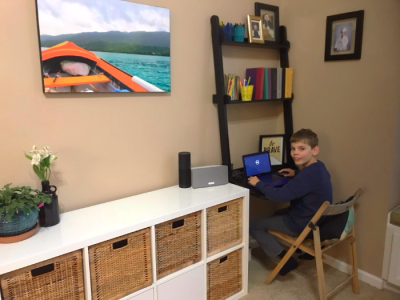 That'll do, bookcase. That'll do.

Posted at 10:48 AM in ANXIETYYYYY, breathtaking dumbness, houseness | Permalink | Comments (14)

Totally TA DA! It's all so pretty & classy & (bonus part) functional! I hope your party is so fun!

It looks really great, and completely intentional. Nice job stealing from yourself! (I wish I owned enough useful stuff to steal from myself.)

It looks fantastic! Take that anxiety! Good luck with Friendsgiving.

OK. With your luck of bumping into, falling over, walking past and something jumping out at you...STUFF...when I saw the title of this, I totally jumped to the wrong conclusion that somehow you had managed to pull the bookcase over on yourself. And you were now in a full body cast because you broke every bone in your body. And I am NOT be Judgy McJudegerson here. Because I too can do all the things to hurt mahdamnfoolself. Amy. I apologize for jumping to the totally wrong conclusion in my head.
I hated homework when I was a kid, but maybe if I had had something so cool from found objects,I might have liked it more.
So, Go You!
I hope Friendsgiving is a complete success and lots of wine gets spilled on the carpet soon to be replaced!

Ah, the whole actually do something about it instead of just stressing out about it strategy. I should try that some time.

Sometimes house things come together, thoughts swarming up (finally!) from the subconscious that has been worrying and worrying for so long. I finally rearranged a 'lost' corner of our living room that had been in stasis for a long time. Now the barely used bookcase has become a shelf of plants in front of our living room window and the couch fits back in the corner and it's all a lot more aah. There, that's one corner out fifty.

We have the exact same bookcase/TV stand thingy from Ikea in my daughter's study room! But not with the doors on the front - need to wander Ikea to find them!

I have the same anxiety over a corner of our dining room with this extra piece of furniture there that just makes me mad that we don't have a 5-sided room. I'm going to re-read this post hoping some kind of magical inspiration will strike me, too.

my favorite game is rearranging rooms / re-purposing furniture from other parts of the apartment to make things feel new again. nice work! it looks great.

Sue W. and I are on the same wavelength. I read the title and assumed you were about to regale us with a tale of always running into a bookcase, or having a bookcase fall on you, or breaking a bookcase. Good to know you're no worse for wear. And that is quite a ta-da moment! It looks so put-together. Excellent work!

Girl are you for real allowing Phil Robertson advertising on your site? Eesh. Seems a little contrary to your beliefs but maybe you don't know they're there??

I am totally with you on the Ikea furniture and getting anxiety about furniture in the house. Feng shui is real!

BRILLIANT! that is all.