Almost There But Not Quite Yet

We have (some) floors! 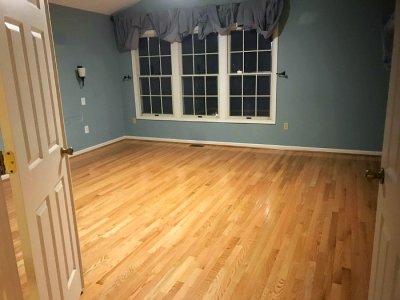 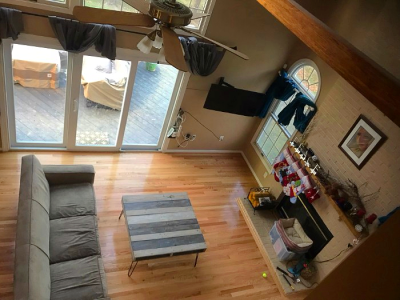 They are very pretty and shiny, though. They shall surely be covered in muddy paw prints and stepped-on crayon nubs in no time, but for now I am very much enjoying this fleeting moment of sparkling newness.

The banging overhead is at a fever pitch today, as the rooms directly above my office are getting installed. Then it's the stairs and thresholds tomorrow, and then we can officially move everything back and get our Christmas trees and lament our lack of area rugs. Also, the new floors are really revving up my already-existing desire to paint over all the beige walls, which, knowing me and my inability to choose paint colors, means you can expect those photos sometime around 2027.

Last night was Ezra's first violin recital at school, which featured 94 third graders plucking at strings to produce something that seemed somewhat reminiscent of music, but only if you squinted really hard. Also a lot of kids swinging their violins around like swords.

Not Ezra though, he took it all VERY seriously and spent the pre-recital lineup/setup time quietly practicing, and then bowed with a big flourish to both sides of the audience at the end of every song. I certainly don't think we have any sort of natural-born violin prodigy on our hands here, but the kid definitely has flair.

Anyway, I have to leave the house today, so I should probably shower (it's been...a few days) and try to cobble together something to wear from all clothing piles scattered all over the house. (The floors in my bedroom closet were done first, so there's absolutely no excuse for why I'm still living with my underwear drawer in the basement and all my pants in the bathtub.)  Then again, the cats have spent the entire week living in a nest they made behind the washing machine, so we're all getting by in our own weird ways.

I actually started an anti-depressant this morning, which is one of the most anti-climatic things ever, since there was so much back-and-forth on the decision and lead-up to the appointment....and then nothing really happens right away. Other than a lot of nausea, which is the most common side effect for this particular med., yay. But I suppose it's a nice distraction from all the existential dread floating in an otherwise bottomless void of nothingness?

(Hey, look at me, finding the bright side of a thing!)

Posted at 10:38 AM in ANXIETYYYYY, depression, Ezra, houseness | Permalink | Comments (14)

Your floors are beautimous! I hope the meds bring you some relief.

Beautiful floor! Hey, it’s good to have a nice foundation to build on, right? Good luck with your new med. Been there, on and off again. Both with the depression and the nausea. I have a standing script for zofran tho, so yay! Nick’s violin concert os tonight. Girls’ concert (singing mostly) was last night. At least they are adorable:)

I *also* started what I'm guessing is the same antidepressant today. Twinsies!! No side effects for me yet. But I'm thinking of you in solidarity.

I am also starting an anti depressant today. I think your post the other day was a wake up call for me that I've slid a little bit more than I realized. So thanks for that. ❤️

Do you have a steam mop? Great for floors like these. So quick to dry!

Love your writing, your new floors, your new antidepressant and your awesome self!

The floors look beautiful! Try taking your medication at bedtime instead of in the morning and that may help with the nausea. Good luck!

I hope the medicine works well for you.

I have to say that Doug Jones winning AL and the news that Farenthold is not seeking re-election, and Paul Ryan is possibly stepping down after the mid-term elections has brightened my outlook, and for the first time in over a year, waking up in the morning seems like it might just be an alright thing to do.

I'm starting to find myself again, and I'm hoping the same for you.

Depression is an insidious beast. You've got to fight it with everything you've got- meds, happy light, therapy, journaling, light exercise, good sleep hygiene, avoiding depressants like alcohol and pot if that's a thing for you. I took fish oil capsules and avoided electromagnetic fields because I was so desperate to feel better. Forcing myself to shower helped, too.

Just hang in there. Anti-depressants are tough to start because you get all the fun side effects (nausea! Dry mouth! gonna eat the houseplants!) right away without any of the benefits until you've been at a therapeutic dose. It can take a while to get there, but once you find the right meds at the right levels, it is truly life-changing. Just keep swimming! Just keep swimming!

I’m so jealous of your floors! I had to clean our decade plus old carpet before putting up the tree and all I could think of was how much I want to rip the crap up and burn it in the back yard.

Best of luck with the meds. Hopefully these will be the right ones for you and can get some relief soon.

Beautiful floors! Hoping you are finally on the track with the right meds. Been there, done that.

Good on you for getting on top of meds!!

Also, if you’re looking for affordable rug central, ESALERUGS is where I got five gorgeous rainbow ombré rugs for my apartment and they’re frequently so cheap it’s silly NOT to buy them and I wish I had more floors.

This violin teacher fan is super happy Ezra is taking the violin bows so seriously, flair is important. Also 93 beginners is epic, consider gifting that teacher some wine as a teacher gift. 😉

Do not be suprised if the animals are a little wary of the wood steps. I thought my dogs were afraid of steps until I went to my parents house where they are carpeted. It turns out they aren't a fan of sliding when they're climbing or descending steps.