It's been five months and change since we adopted Poppy. And still the most frequently asked questions we get are:

A. A mix of Staffordshire Terrier and Labrador Retriever, we believe. She was brought to a shelter not long after she was born, along with her mom and litter mates. They were all classified simply as Pit Bulls. So we assume her mom was more of a classic-looking Pit Bull, since a lot of shelters/rescues will try to avoid the stigma (and a nearby county's complete ban on the breed) and call pittie mixes literally anything else if they can. Her dad was probably a Lab or maybe Pointer or some other hodge podge, given the shape of her snout. I keep meaning to order a doggy DNA test for her. 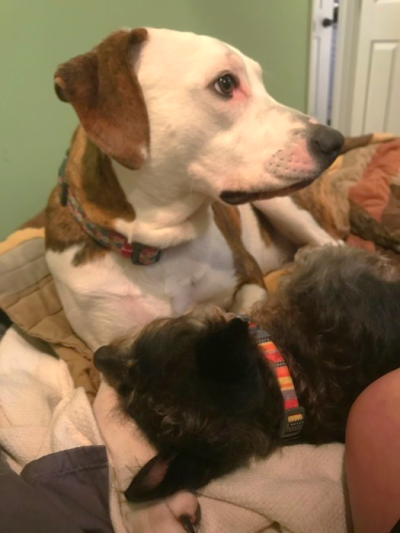 Q. How is she with the kids?

A. Terribly vicious. An absolute nightmare. The things this animal will do for belly rubs will shake you to your very core. 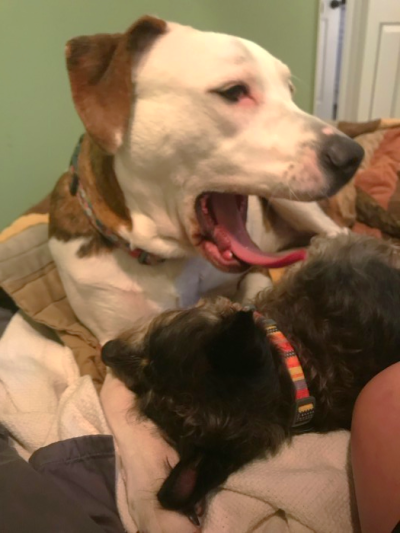 (lolololol She's the gentlest sweetest thing and loves being around children, both ours and other people's. She's doing much better about jumping up since graduating from obedience school and will now greet you politely, although the entire back half of her body still vibrates with barely-contained PET ME PET ME PET ME excitement. She wouldn't hurt a fly, though one time she did eat a stink bug.) 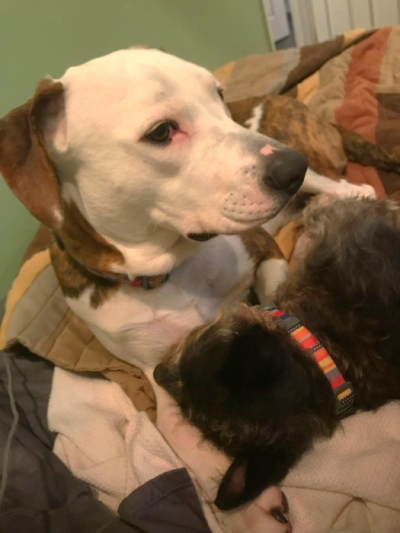 Q. How is she with Beau? 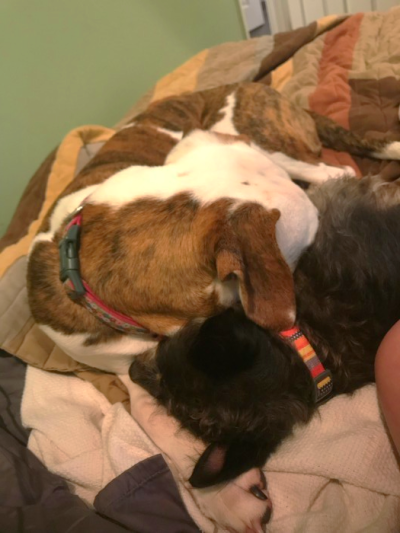 Yeah, there's nothing but love there, too. And it's completely mutual. All aboard the U.S.S. Dogpile.

She. Is. AWESOME. Except that she learned she can jump the 6' tall back fence, so we tore it down (it was old and rotting anyways) and built a new, 7' tall back fence (as tall as we can without a permit in our county)...she can still jump it. So we're working on figuring out some dog-containment systems at the moment so that she and our other dog can be in the backyard unattended sometimes!

As much trouble as she gets into (she's only 2 and still very much a puppy, in that OMG SO NAUGHTY BUT ALSO SO CUTE STOP EATING YOUR BEDS PLEAZ kind of way), adopting her from the shelter was one of the best decisions we've made! She's amazing with kids (our first is due in June), she loves to cuddle and she and our other dog, and our cat, all get along amazingly. Pitties are really fantastic dogs!

Oh man, another Poppy post. I better get the tissues!

Idk why, but she just gives me ALL THE FEELS. I think it’s her sweet little face.

Merry Christmas Poppy. I hope Santa brings you something awesome to chew on. 💖

Now talk amongst yourselves, I’m getting verklempt.

My SIL did the DNA tests on two mutts and two purebreds. All came back as part lab (including the miniature schnauzer)! Not sure I would spend the money but YMMV. For kicks I should do it on our purebred lab! She would likely be part couch!!

That'a a Labradorish profile, for sure. Cutie.

I love your pups from afar ... I'm not a "I need a dog in my house" person, but I appreciate the dogs of others. They're so cute!