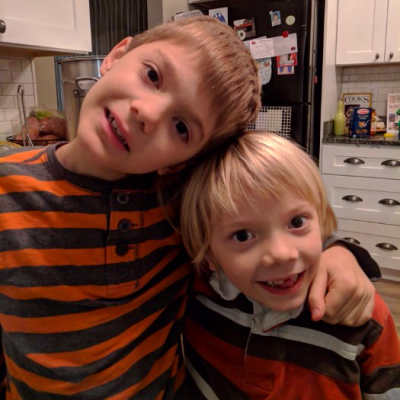 I AM NOT EVEN JOKING.

Ike came home from school soooooo excited (and sooooooooo adorably gap-toothed) yesterday, because his top front tooth fell out on the bus. He'd been waiting to lose that tooth for what felt like ages. "I look like a REAL first-grader now!" he announced proudly.

And then he accidentally dropped the tooth on the kitchen floor.

And then Poppy ate it.

One gulp, and it was gone, like so many dropped Cheerios before it. Ike burst into tears. "BAD DOG, Poppy!" he wailed, as we all rushed to console him.

"We'll write the Tooth Fairy a letter!" Ezra proposed, ever the problem solver.

"I lost a tooth in the OCEAN once." Noah reminded him. "And the Tooth Fairy still came! I got like $20!"

(Thankfully this infamous conversation did not repeat itself.)

Indeed, the Tooth Fairy was quite sympathetic to Ike's letter and explanation of "MY DOG ATE MY TOOTH" and left him five whole dollars.

He rubbed Poppy's belly this morning before school and told her he forgave her and was sorry for calling her bad (since you can literally see her spirit collapse and her heart break in two whenever she hears that word).

"You just don't know all the rules yet," he said to her, "because you're still a baby." 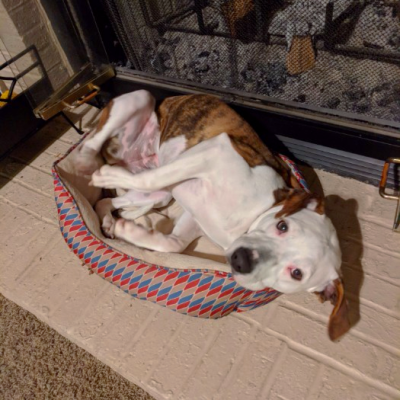 OMG! This post is so sweet! I'm glad the tooth fairy is an understanding sort. And that Ike got his tooth fairy money and forgave the doggo. Also, my German Shepherd is tall enough to rest his head on the table like that! Good Girl, Poppy!

LOL, you can't make this stuff up. I love House Storch.

@Karen - House Storch "We don't eat other people's teeth."
Glad all was well in the end and that the tooth fairy was generous ;-)

Most I ever got for a tooth was a quarter! I elation at it's finest! Love that gap tooth grin.

Holy. Crap. I just laughed so hard - “no eating other people’s teeth.”

You're doing it all right. I just need to say that. This post melted my heart.

Aww, Poppy didn’t mean to eat the tooth! She thought it was a varmit. (That’s what our cats say when they attack our hands or feet and end up hurting us.) She’s such a sweetie though, even if she did mean to eat the tooth I wouldn’t be mad for long. Being cute goes a long way towards forgiveness in my book.

Okay. I k ow that Ike is in school. But HOW IS BABY IKE GAPTOOTHED????

❤️ I needed this happy story. Thank you

I found a human tooth left behind in my classroom once, which was deeply startling. It was the same day I explained what "the patriarchy" means to a bunch of 7th graders (and got enthusiastic understanding), so I chalked it up to a "universe balancing itself" kind of thing.

But I did add another classroom rule to our list:
1. Be brave
2. You are never done
3. Show compassion
4. Be your own advocate
5. Everybody breathing all the time (i.e. don't bring allergens into the room)
6. TAKE ALL BODY PARTS WITH YOU WHEN YOU LEAVE, PLEASE

One of our dogs are my mom's diamond earrings off her dresser. Was a pretty tense few days of poopwatch....

Sweet Ike to forgive Poppy. She reminds me of my dog, who also eats anything and everything (but is not a baby). Whenever ANYTHING falls to the floor, we all immediately start yelling "leave it!" repeatedly. It usually works -- she stops with her nose just an inch from whatever it is and we can usually reclaim it.

The way your boys love each other is joy personified. I love that both Noah and Ezra made a point to try and console him, and Ike's forgiveness of Poppy is so sweet.

When teeth fall out, I'm reminded that humans are kinda gross. But this post was sweet enough to overcome the horror that is all things losing teeth.

One of our rescued greyhounds ate everything, and she wasn't a puppy. She ate a ring I left on the counter (and it was a Tiffany basketweave ring--not cheap!), several legos, shoelaces, pens and pencils, several pieces of mail, and part of my glasses--I had left them sitting on the ottoman for about 2 minutes to answer the front door. She nabbed them while I was talking to the neighbor. She kept it up until she died at the ripe old age of 11. We had to constantly be on "Roxy patrol", keeping things out of her considerable reach (she could rest her head on the kitchen table), and listening for any sounds of illicit chewing. It was very much like having a toddler in the house.