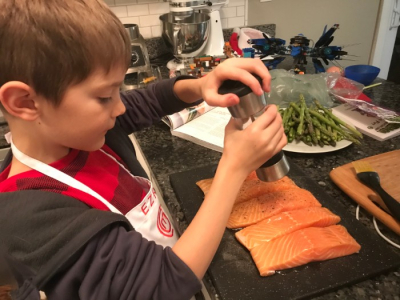 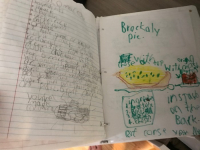 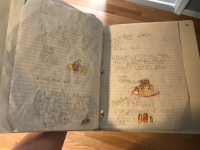 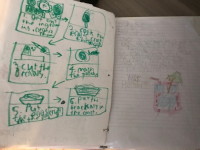 That's not to say that the original recipes are...workable, quite yet. Or even fully legible. Ezra inherited both Jason's terrible handwriting and his cavalier, improvisational approach to cooking/baking. Just eyeball the flour, it'll be fine! Don't have an egg? Use cheese! Lid fell off the cinnamon jar? Today I present the judges with Cinnamon French Toast pan-fried in cinnamon butter and topped with a blackened cinnamon crust, please enjoy.

Most of his ideas have SOME basis in reality -- he wants to bake a sweet potato pie, I can find a recipe for a sweet potato pie -- but then he chafes a bit when it's clear that we're not 100% really following his concept for a sweet potato pie. So I'm always torn between letting him experiment a little...while trying to guide him towards a somewhat edible final product. And not setting things on fire in the meantime. 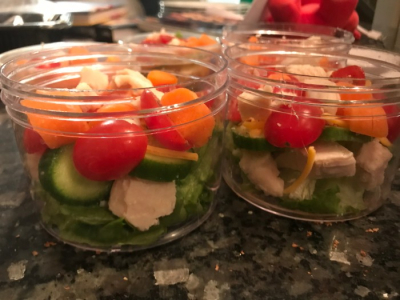 (Our go-to compromise is salads. He makes a lot of salads. He is allowed to GO NUTS with salads. These are mini-Cobb salads we pre-prepped for his lunchbox.)

Sometimes his experiments work out surprisingly well, like these spinach and blue cheese tortilla roll-ups. They were really tasty! 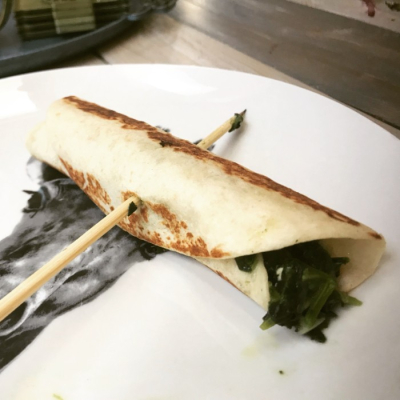 (His starting point was a recipe for some kind of grilled beef sandwich. We didn't have any of those ingredients so he came up with this instead.)

Other times, the result doesn't meet his expectations, like when, on Christmas Eve, he decided to add honey and chocolate chips to rice crispy treats and then top them with jelly. He dutifully ate one square and then left the rest "for Santa." 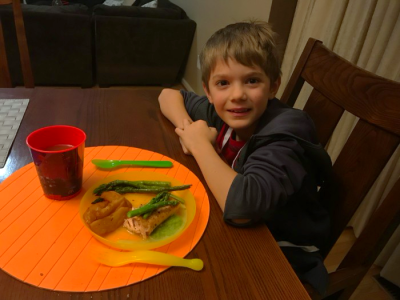 Everyone agreed that his salmon with asparagus and fried apples (both from the MasterChef Junior cookbook), on the other hand, was a fabulous dinner. But I could tell, as usual, he really wanted to put his own spin on it, as he lamented our lack of mushrooms. He thought it needed some mushrooms.

Never again, as he now provides me with a weekly shopping list.

(Note he also gets his spelling skills from his father.) 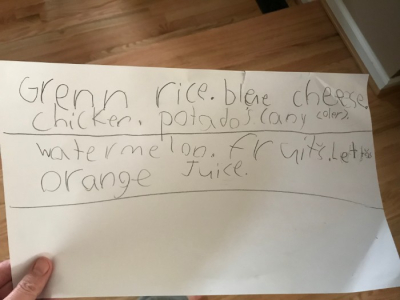 This week he requires green rice, blue cheese, chicken and "potados (any coler)," along with watermelon, fruits, lettuce and orange juice. I asked for clarification on "fruits" and was told to get whatever "looked delicious."

Yes, chef. Whatever you say, chef. 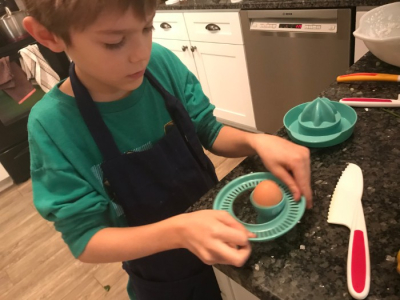 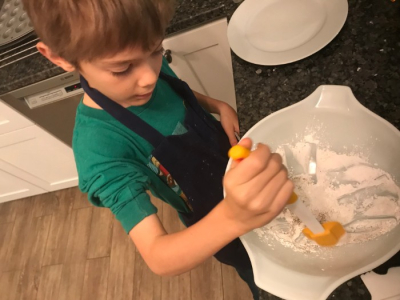 He is gonna have a show on Food Network someday!

I love this. I have a feeling this is just the beginning.

I will never be be tired of Cookin' With Zah news! Truly, his enthusiasm for cooking is fantastic.

Does he ever watch "Chopped?" He could discover all kinds of weird and wacky ingredients and be inspired by the way the contestants create a dish.

I love Cooking With (Mighty) Zah! I bet many chefs started out by mixing some not so traditional Thu rd together in moms kitchen! Someday I hope to see him on Food Network.

Oh my goodness....could I borrow him for a week or two so he could teach my kids a few things?! They're both non-adventurous when it comes to food. What made the mighty Zah interested in food? I would love to spark that interest in my kids.....what's your secret?

There are no words for how much I love this.

I think cooking is the perfect way to learn almost any subject - math, science, english, art. Have you guys had a chance to watch any of Alton Brown's Good Eats series? He explains the science behind what happens.

I married a chef, you're in trouble girl. But this is really wonderful and awesome and I would like to pre-order a copy of his cookbook.

I will never tire of ZAH cooking stories.

Chef Ezra is so inventive! I only wish my girls were more adventurous with food (although they still eat better than most kids their ages).

On a separate note, can someone explain what the last picture is of? It looks like Ezra has an egg in what looks to be a juicer. Is that right? Or is it some other gadget? I must know! (I have so many kitchen gadgets).

@Stepanie It’s an egg in an egg cup he’s “swirling” in part of a juicer, yes. He thinks it makes for a better scrambled egg? Like I said...okay chef!

So impressive! I love the "whatever looks delicious" response. You've got your hands full there. But, getting dinner in the process is pretty sweet too.

You could totally sell that cookbook for college (or culinary school) money. Or cooking classes or a trip to France or, point is, I would buy one.

As a chef, I wait with bated breath for Cookin’ with Zah®️updates... and thought I might toss a couple of ideas your way. Cooking in the time-honoured ‘Follow the Recipe’ way is amazing for many people, but people with a creative bent, like Ezra, might find it even more helpful to learn techniques, in addition to recipes. I’m reminded (is this too embarrassing to say, metaphorically, out loud?) of the scenes in ‘Waitress’ where the lead is inventing new pies: she starts with the knowledge of how different kinds of pies work (certain ingredients need to be cooked beforehand, some pies require prebaking the crust, etc.), and then lets her imagination run wild.
He might, eventually, enjoy Michael Ruhlman’s ‘Ratio’, which analyzes the standard recipes that other recipes are built from (e.g. bread dough or pasta dough, roux sauce, stock), and distills them into a simple ratio, which then makes inventing and experimentation easy and fun.
Unsolicited advice aside (apologies, take with a grain of salt, ignore at will etc.), you’ve done a marvelous job of nurturing his interest in cooking, and I’m especially impressed given how much more work it is to cook with “help” than without...

I love cooking with Zah!

On a side note, what is green rice?

I wish my older kids were half as interested in cooking as Ezra is. My 14yo just learned to make fried eggs, so let's just say we are a little behind the curve. In any case, have you ever used Raddish Kids? He might be into that. I have no idea how good the recipes are, but have been looking into membership for gifts for other kids. Also, what are those containers his salads are in?

I cannot tell you how jealous I am of this! My son has no interest in eating or cooking. I need to really make more of an effort to get him to help me in the kitchen. He just turned 11 and I really want to give him to confidence to be in the dinner rotation within the next few years. Plus, I refuse for him to grow up to be the man that can't cook. I guess I need to get one that then.

Brockaly pie. This made my day. I love your little chef.

Cooking with 'Zah is one of my favorite things ever. And now he's written a cookbook!

This is the best. Just the best. Good for him. And for you, for having someone else to cook dinner for you! If I don't cook dinner, then my kid is just fine eating cheese sticks, or cereal right out of the box, or anything that doesn't require her to exert any effort. Heating up leftovers is often quite too much for her. Good for both of you!

I see what you’re doing there. However, Noah will always be my most favorite Interwebz Blogger Boy. (Ezra and Isaac are close contenders, though, what with all the cooking and the hairzzz.)