The great kitchen appliance I'm Not Dead Yet tour lumbers on. The refrigerator's ice maker broke and leaked water everywhere (something I discovered while sitting downstairs in the basement, when water began dripping on my head halfway through The Cloverfield Paradox). And then that duct-taped shelf randomly un-duct-taped itself the very next morning and took out a dozen eggs and a bottle of mustard.

Jason attempted to fix the ice maker, but after spending 10 minutes behind the fridge he realized it was a goddamn miracle the thing was running at all, or not currently on fire. (Maybe it was! Maybe the water leak just canceled it out.) Bitch was old. And very much on its last legs.

Not going to lie: I straight-up clapped my hands and cheered. New fridge! New fridge!

(In case you're wondering where all this money we suddenly seem to have came from: We took out a home equity loan a few months ago to fund several projects, like the floors and a new patio out back that is getting underway later this week. We also included some buffer/padding money in case of something going over budget or, say, all our major appliances turning to shit at once.)

Our shiny new refrigerator arrives later today, and I spent most of last night and this morning emptying the current one out. An absolutely disgusting job, I'm embarrassed to admit, that involved tossing a lot of fuzzy condiment bottles and Mystery Tupperware directly into the trash.

(I blamed the fridge layout, of course, for making things too hard to see and/or too easy to get buried in the far back. The new fridge is a completely different configuration and will totally solve all those problems and we'll never have a gross fridge again for ever and ever. I am so adorable sometimes.)

Here is a list of everything I found on top of the fridge. It's safe to say there was a bit of a theme:

7) Lightsaber with BBQ tongs inside the lightsaber

11) Party favor noisemaker someone was using like a sword

12) An assortment of whistles

The new fridge is, alas, a couple inches taller than the current one, which means I need to find a new place to put all the things my children beat each other and/or annoy the shit out of me with. 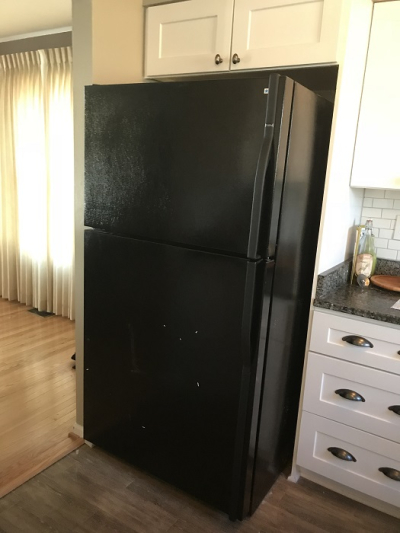 Dude, that was my old fridge, too! Gotta say, the new one with its options (sliding shelves!) is much easier to keep clean, though I, too, am often adorable in my optimism.

OMG, you ARE adorable! We had to buy a new fridgeca few years ago when our old one blew a gasket (literally) and we found out they no longer made them because the fridge was thatdamnold. New one has freezer on the bottom, double doors up top for the fridge part so nothing ever gets lost. Yeah, no! I just this morning found some tart cherry juice that migrated all on its own to the back of the shelf and hadc a lovely layer of mold growing on the top. Ugh! So fear not, things still get lost, no matter how new the appliance is.

We had to get a new fridge last year and I curse the refrigerator niches that limit your size. I spent way more time than I'd like to admit at the scratch & dent place with my tape measure. Here's what shocked me the most about the new fridge: the LED lighting!

Yay! NEW FRIDGE! I've been wanting my old fridge to just die already for like, three years. It's from 2002.

Love the assortment of "let's injure my brothers" detritus you found, LOL. I have two sons, and we started charging them 10 cents for each foam bullet they wanted back after we picked them all up off the floor. I guess they win, because they found other things to hurl at each other.

I got confused and thought you found all of those things INSIDE the fridge, at first. I was like, ok my life is crazy but how does that even happen?? Whoops. My monsters (erm, boy type children) also turn EVERY. FLIPPING. THING. into a gun/sword/weapon. Sigh.

Can you share more about your new fridge's configuration and accessories that you selected and why you wanted them. And, Laurie said LED Lights.... not sure if it was good or bad or how it is different other than burning out more slowly than other light bulbs. Hmm, Yes, I am worried about needing a new one myself and wanting to understand from a user point of view about all the newest features pro and con because the costs!!! And life expectancy!!!! and HELP>>>>>

This is the best thing I have ever read. I have always assumed I'm the only one who puts everything I take away from my kids on top of the fridge. Yours sounds exactly like mine. Mostly things used as swords. So glad I'm not alone.

I don't know what's more tragic--the fact that your refrigerator was leaking water onto your head or that you were watching "The Cloverfield Paradox."

We have a WiFi-enabled Samsung fridge, which I love (I mean, I love the fridge & layout...I didn’t really *need* to read AP News or my Twitter feed while grazing for a snack...)...it (and newer Samsung fridges, and maybe other brands too) has a feature that allows you to input food & the expiration date. Which is great in theory, so technically you could actually avoid fuzzy condiments forever-more. But really...ain’t nobody got time for that.

I just had to replace my dishwasher, which came with my house and was manufactured in 1995. I was VERY SAD to have to spend money on a new one, but I am SO HAPPY that it matches my other stainless steel appliances!

Hahahahah! The top of the fridge is also where I store all confiscated items! If I can't find something, I have to pull a chair over and just look up there first. Sharpies, hair chalk, pumpkin carving kits, catnip, holiday items, Kindles, Barbie car.... Our assortment is more random but it probably ended up there for the same reasons.

I saw this and thought Noah might be interested. Apparently they found a lock of George Washington's hair in a book. If you watch the video you can see the hair.
https://www.msn.com/en-us/video/peopleandplaces/meet-michelle-obamas-official-portrait-artist-amy-sherald/vi-BBJ5IAe

Our fridge also has various swords and lightsabers and random household-items-used-as-weapons on it!! And a lot of dust.

Yes! We just upgraded the fridge that came with our house a few months ago after we let it limp along with such vague ailments as "I feel like milk goes bad quicker than it should..?" until finally we discovered it had secretly been leaking water for god knows how long. We only noticed this because the floor right in front of the door sort of...buckled up...? And then OMG WE'RE WRECKING THE FLOOR. We upgraded from a fridge so old it was that tan color you find in really old houses to a new Samsung stainless steel model and Oh. My. God... Like someone else said - LED lights! The fridge dings if you leave the door open too long! The glass shelves aren't etched with weird old people flowers! We definitely feel super fancy now.
Now we're just waiting on the stove to kick it so I can wreck my credit on one of those fancy two-door models.

We've been slowly replacing our crappy appliances, too. I got a new washer and dryer a few years ago for my birthday (I specifically asked for them). We replaced the cheap dishwasher we bought our first year in this house (we've been here 15 years) last year. And we finally replaced the ugly 15 year old side-by-side fridge last year with a bottom freezer model. We didn't have enough width in the fridge niche for a French door fridge, and I did not want another side-by-side. I HATED that fridge. Never enough room, things put in the wrong spot on the fridge side would freeze, and we had to duct-tape one of the drawers when the bottom literally fell out. The only appliance we haven't replaced? Our oven, which I believe is original to our house, which was built in 1959. That thing is probably going to still be cooking after I'm long gone. It's actually pretty awesome--it has two ovens, one regular sized, and one smaller one. It works surprisingly well, and it looks really cool in a retro, mid-century kind of way.

Ummm...pictures? We all want to see the shiny!