It's a Batman Rollerblade Party

Ezra asked for roller skates for Christmas. ROLLER skates, not inline skates, he insisted, several times. Then he completely forgot about this request, as did his wonderfully amazing parents who would never overlook their middle child's Christmas list that he left sitting right there on the kitchen counter for Christ's sake.

But he didn't ask Mall Santa for roller skates, so after realizing their omission (around 11:45 p.m. on Christmas Eve), I figured maybe they were more of a temporary whim rather than something he really, really wanted. Especially since 1) he'd never been roller skating, 2) had never asked to go roller skating, and 3) I am 99.9% sure he only knows roller skates exist because of Calvin & Hobbes.

But alas, on Christmas, Ezra surveyed the room of unwrapped present glory and asked the dreaded question. "Where are my roller skates?"

I reminded him that skates weren't one of the things he asked Mall Santa for, and he nodded for a second before destroying me  once again. "But I mailed a letter to the REAL SANTA and asked HIM for roller skates."

That's right. He did. 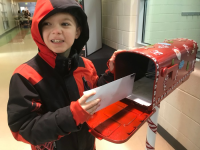 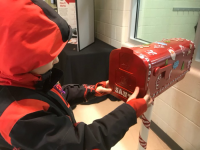 I even took pictures! I am really so good at this.

Last weekend his grandparents visited and gave all the kids gift cards as belated Christmas presents, and Ezra's was enough to cover the cost of some shiny new roller skates. (Actually a combo set that can be switched between roller and inline, which Jason encouraged.)

Ike predictably chose a Lego set with his money and then promptly began whining about his total and unfair lack of roller skates. At which point I remembered that a long, long time ago in a galaxy far, far away, Jason bought Noah a small pair of inline skates. That went...about as well as expected, which is to say NO and NOPE and CURSE YOU FATHER. He was a lot younger than Ike, but he's always had really big feet for his age so it was entirely possible that somewhere in our cemetery of regrettable sports equipment purchases we had a pair of unused skates that might fit Ike...

...who proceeded to beg and bug me about finding them three hundred zillion times since then, usually right as I started making dinner or while I was asleep.

Jason found them last night, along with his old Rollerblades. They did fit! And Ike caught on pretty quickly -- Ezra, meanwhile, was actually struggling on the regular skates and asked to switch to the inline style. Which led to all three of them skating in endless circles around the living room (on our brand-new shiny floors), with two of them in matching Batman pajamas, complete with capes.

(No word on whether Jason found MY old Rollerblades; I tried that shit like two times after he bought them for me and was like, do you even see how often I injure myself on a daily basis WITHOUT wheels strapped to my feet? No thanks. But it was sweet how Ezra offered to teach me because he loves me. Hopefully that was Jason's motivation too, back in the day. )

Actual video footage of Noah while all of this was going on:

Your house is a very, very fine house.

Swiffer dust mops are very very fun on roller blades. I remember your kids loved vacuuming. One of my kids was willing/happy to dust wood floor as long as she could be on roller blades. She was good skater, no impaling.

Sam Eagle - the best! I was honestly waiting for one of the boys to grab those curtains and rip them down.

On behalf of your new floors, I am compelled to point out that a garage, sans vehicles, is a great place for winter rollerblading. Says the girl who grew up in Wisconsin. With real roller skates, sorry Ezra.

Christmas morning roller skating up and down the block with our cousins and neighbors is a cherished memory. This was in Florida when skates came with keys and fit over shoes.

Here is something Ezra would like even though it is such a long shot I hesitate to mention it. It is definitely not something I'd ever hint to the shorter set that I was doing. I saw this in a magazine while at the store waiting to check out. The Master Chef Junior Experience Sweepstakes. https://www.familycircle.com/masterchef/ Seems anyone over 21 can enter daily thru 5/31. It is from Family Circle/Parent Magazine and is definitely legit. Lightening might strike.

You may already know about this, but I highly recommend checking out https://kidsskatefree.com/locations.php to see if there are any participating rinks close to you.

We use this at our local skating rink, and I pay $4 once a year for my son, and he can go twice a week for free. It's amazing, really. He is 4, and he's become a very good skater! It looks like your boys are getting the hang of it quickly!