Home Archives About Subscribe Advice Smackdown Tip Jar
The Storches Did A Thing!
what

In other non-home improvement news, Poppy ripped open almost-new bag of cat food yesterday and promptly horfed the entire thing down in under five minutes. Or however long it took me to go from, "hmmm I don't like the sound of that" to finding this in the living room: 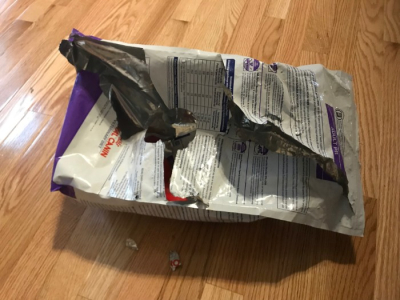 (TANGENT: I had a doctor's appointment yesterday in Baltimore and not long after I got there Jason texted me asking about Rey's whereabouts, as someone on Nextdoor reported seeing a stray black cat on the road right by our house. She'd been on our bed when I left and for the life of me I couldn't think of a single rational explanation for how she could possibly have gotten outside but you KNOW I came up with several irrational ones* and was low-key terrified until I got home and could confirm that yes, she was still right there on the bed.)

(Then I got in the car and drove around looking for the other cat, because YAY FREE CAT. And obviously this house totally needs more animals.)

Of course, Poppy is now paying dearly for those five minutes of glory. Liquid shits and near-constant farting and this morning her crate was reminiscent of a toddler overnight diaper poop explosion where said toddler has removed said diaper and flung it across the room. I was rill happy for that nostalgic flashback as I cleaned it up earlier, nearly barfing myself over the smell and also my antidepressant.

Jason's like, the vet says you need to boil her some chicken and rice, the poor baby, how's my poor baby, because that man is crazy for that dog. Don't get me wrong, I love my lil' Popsters the Poppyheaded Poptart too, but I would appreciate a little...well, appreciation for the mess I had to deal with and also all the farting. Holy balls, dog. Go back outside.

But this is a guy who spent last night making homemade peanut butter dog treats in the shape of gingerbread men and still fed one to the dog who was still visibly packed full of several pounds of undigested cat food. 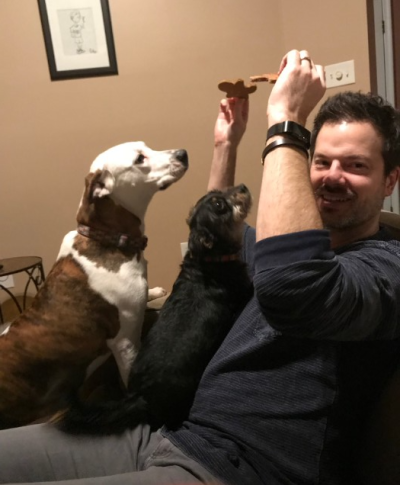 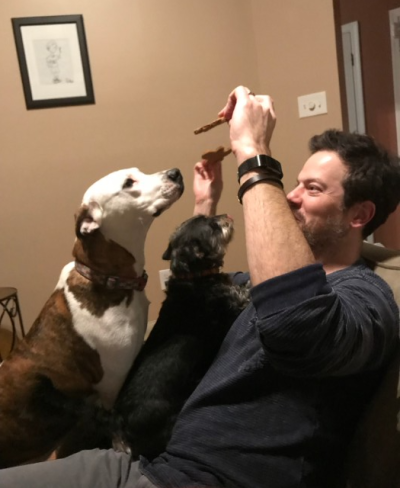 Anyway, life is glamorous AF around here, as per usual. Now I have to go boil some chicken and mop poop crust out of a dog crate.

*In my defense, this is the same cat who full-on fell out a window just days after we got her, and also a couple months ago I came downstairs in the morning and she was just...sitting outside the back door, waiting to be let in. To this day we have no idea when or how she got out there in the first place. She did not enjoy her night outside, and now runs away in terror from any door in general.

Posted at 11:50 AM in breathtaking dumbness, Jason, Poppy, Rey the Cat | Permalink | Comments (8)

I feel like I'm reading the story of our dog, circa 2009. My now almost 10-year-old pitbull mix did a version of all of these things at that age too. I just got rid of two dusty books that had corners demolished because of her teething puppy days. Ah, memories. She also had the poo explosion (all over a recliner, yay!) from eating something she shouldn't have, but I can't remember what it was.

Yep, Yep, Yep. My super duper smart pup did that with a Christmas tree when he was 6 months old - ate 1/4 of a decorated live Christmas tree - branches, lights, ornaments, garland, and stand water. It was super fun to clean up - multiple times! I wish I could tell you he learned his lesson... Add some pumpkin puree to that chicken and rice (there are instructions on the interwebs for the amount per pound of dog, but I use a hefty tablespoon and it works fine for my 90lb pup). The pumpkin puree will help with the liquid poops/farts.

I highly suggest one or two Nest cams to alleviate the "OMG - where is she?" moments of pet ownership. We have one in our living room and one in the bedroom (our pup's favorite snoozing spots) and it's such a relief to be able to do a quick check-in when we're out of the house!

Our old dog would get various bouts of the pukes and then the bland boiled chicken and rice diet. That gives weird poops, too. I'm still traumatized from the time his pukes were caused by his ingestion of cat poop. That's a special kind of disgusting.

We got our cat allergy tested after some reactions that wouldn't go away. Turns out chicken was pretty high on the list (as well as all six types of mold). Could you do that? Btw, it's super fun to find cat food that isn't made with chicken meal. And expensive!

you can put that shiny new instant pot to work on some chicken and rice for that poor baby. ;) one of my dogs is a regular puker so i throw a big batch of brown rice, water, and frozen chicken breasts in the instant pot and cook it all at once. shred the chicken and the rice gets mushy af but dogs don’t care, they think it’s a treat. i portion it out in 1 cup servings in ziploc bags and throw it in the freezer. at least then the special diet is already made so it makes the whole ordeal a little less of a chore.

Oh man--it's that big lump on her side, right? Bless her heart.