Home Archives About Subscribe Advice Smackdown Tip Jar
An Ode To All the Crap I Found On Top of the Fridge
The Storches Did A Thing!

I'm not a very big Pinterest user. I have fits where I go and pin three dozen near-identical home project ideas that I will never look at again, and then I go so long without logging in that both my browser and my brain have completely forgotten my password. Twitter gives me anxiety, Facebook makes me depressed, Pinterest is why I have a dozen dead succulents in my kitchen.

Jason, on the other hand, freaking loves Pinterest and regularly falls down the wormhole, texting me link after link of things he is TOTALLY gonna build/cook/make/whatever. And a couple times he maybe actually did!

Anyway, once upon a time and several hundred bottles of wine ago, he came across a tutorial for making a bathmat out of wine corks. Wow, that looks really cool! And seems pretty easy, especially because step one is literally to just drink a ton of wine to collect the corks. WELL I FOR ONE AM SOLD.

And so we began saving wine corks. From nice bottles, special bottles, crappy bottles. We'd order wine at a restaurant and I'd snatch the cork from the waiter's hands because I needed it. For reasons! We'd go to a friend's house for dinner and be like, "Wow, cool cork, can we keep it?"

We filled up several vases' worth of wine corks over time, and displayed them on our mantel so we could look at them every day and mutter something about needing to make that stupid bathmat already.

Step two involved splitting the corks in half (so there would be more surface area for the adhesive, in theory solving the problem of wobbly round wine corks popping off left and right). This was...more challenging than anticipated, took absolutely forever and involved a very sharp knife and thus resulted in SEVERAL finger injuries. So much bloodshed. Over a bathmat.

Step three involved lining the corks up in rows, jigsaw-style, and attaching them to a shelf-liner base with super-strong adhesive. 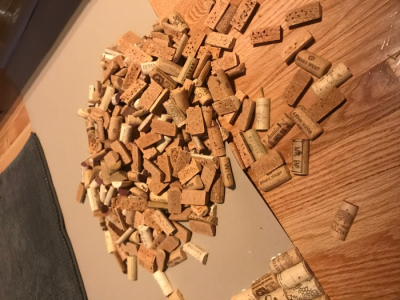 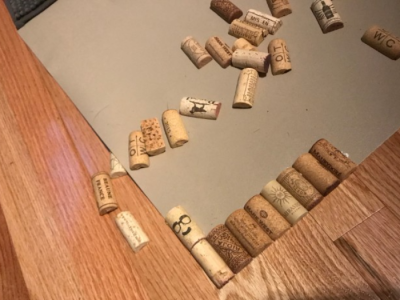 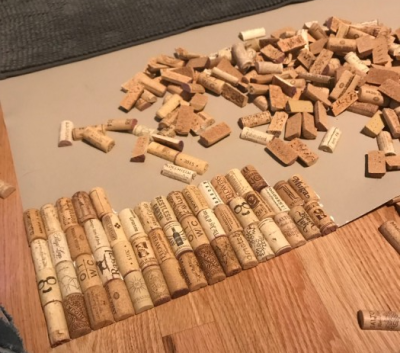 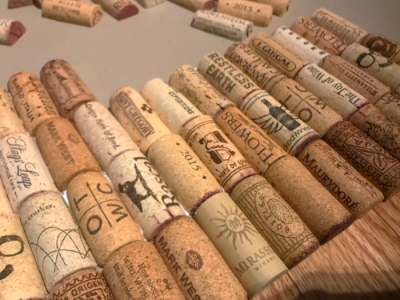 I was super-duper meticulous about cork placement, lining them up perfectly by size and design and making sure we didn't have too many duplicates too close to each other (we drink a lot of Mark West Pinot Noir apparently ). Jason watched me for awhile and then accused me of overthinking our bathmat. 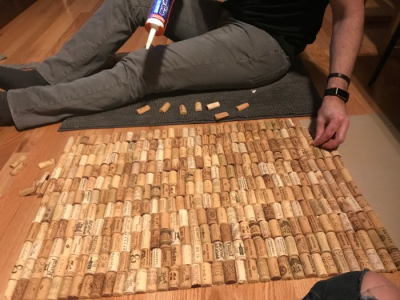 He took over piping the adhesive while I followed behind with corks. It did go a little faster this way.

Step four is to trim down the shelf liner and realize you've slaved over a thing that your dogs will probably eat and/or your cats will scratch up. 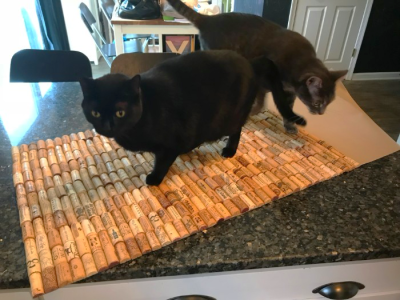 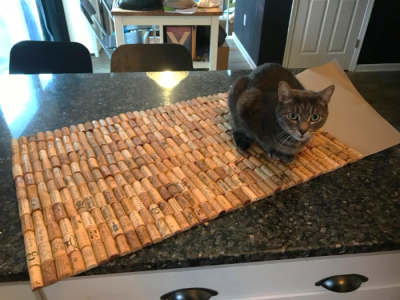 Step five is that there is no step five. Congratulations! You now have a bathmat. 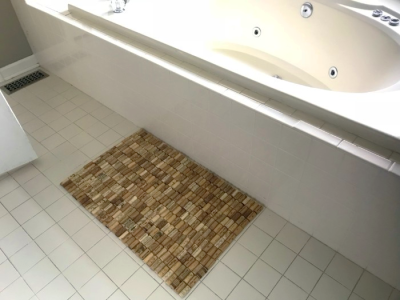 Posted at 11:37 AM in breathtaking dumbness, houseness, Jason | Permalink | Comments (9)

"Twitter gives me anxiety, Facebook makes me depressed, Pinterest is why I have a dozen dead succulents in my kitchen." I don't know how one goes about selling jokes but seriously you oughta get paid for that one!
The mat is very cute. How does it feel on bare feet?

But does it conveniently match the new refrigerator? And speaking of which - WHAT ABOUT THE NEW FRIDGE???? I'm dying to know if you love it. :)

I still ponder each time I’m here how exactly you put your *clothes* in your *bathtub* during The Great Floor Remodel. Like, did you line the bathtub with a bedsheet first? Visqueen? Or did you literally just lay them straight into the tub? 8-/ Are *everyone’s* tubs that clean except mine??!

I am very impressed at y'alls bathmat! I once tried to make an 8x10" bulletin board with wine corks and gave up after trying to slice three corks in half. I did NOT realize how difficult that was!

How often are the cats lounging in the bathroom now??

I love that the cats are immediately all, "For us? Thank you, don't mind if we do."

It may have been a pain to make, but it looks really cool!

One year I made wine cork Christmas crafts for all our friends and family (we also have SO many corks leftover). Never again. Cutting wine corks was insanely hard!!!!

I may have counted wrong, but it looks like 11 by 38 corks-- which would be 209 bottles of wine. Impressive.