After mentioning Ezra's migraines last week, my friend immediately texted the suggestion of getting him a pair of anti-blue light glasses. Immediately after that, I got a call from the school's health room. Ezra was there, complaining of a headache. His eye was visibly twitching and he was worried he might throw up. They'd tried Ibuprofen and some time lying down in a dark room, but nothing was helping.

When I arrived, he looked pale and miserable. "It was Technogoly again!" he told me. "Technogoly always makes me catch a headache!"

I ordered him the glasses as we walked back to the car. 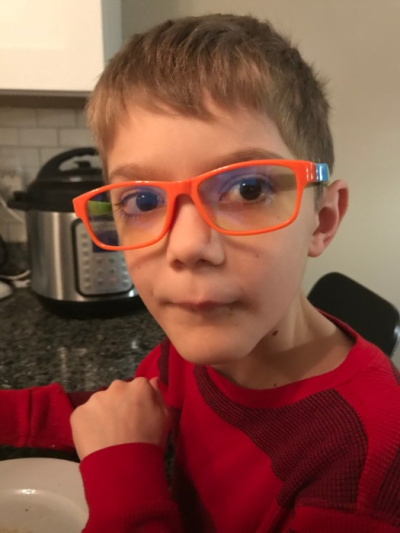 (And also a lurking Instant Pot. We finally caved to the craze and have since gained 25 pounds from homemade Indian food. It's really amazing and WE LOVE IT but it will probably photobomb 75% of my photographs given that I have nowhere to store the damn thing.)

Ezra's now made it one whole week plus one Technogoly class without ANY headaches at all. I told him he only needed to wear them for screens but he likes them so much he only takes them off too sleep. Which probably is a good thing, since he's complained about the regular lights in his classroom bothering his eyes before too. We're continuing to check for other causes/triggers but so far, I am insanely pleased (thank you, fellow-migraine-sufferer Lydia), and more importantly, Ezra is happy and pain free and thinks he looks pretty cool.

I'm fine with him wearing the glasses all the time, but I did have to draw the line last night and tell him that no, you cannot wear your roller skates while scrambling eggs, please. 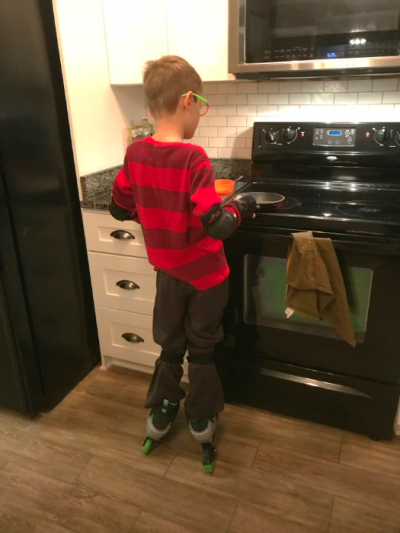 (Add that to the long list of Strange Household Rules I never, ever thought I'd have to declare, along with don't pretend to breathe on your brother, walls are not hand towels, and of course, no eating other people's teeth.)

At least he's wearing his elbow and knee pads? Kitchen safety is important!

Woah. I get a headache pretty much every single Monday as my eyes adjust back to sitting in front of a screen all day. (This has happened for years.) The year or so I worked in non-office jobs? No headache. Maternity leave? Well, that's a different headache! I'm gonna need to look into this.

Umm, I'm going to need those Indian food Instant Pot recipes. I recently got an Instant Pot and need some good recipes!

Computer blue-light glasses changed my life! So glad they are helping Ezra too. For all the squinty adults out there, DO IT: http://amzn.to/2Ecp8kd

We used the Butter Chicken recipe Jason mentioned on Instagram and it was amazing. (We are IP converts going back a ways and actually have two now, which just meant we set up the butter chicken and the brown rice to cook at the same time because we are dorks like that.)

Mary, We use this cookbook. The butter chicken is to die for...
http://amzn.to/2EP2RG4

One think I did not expect about parenting — my older boy wiped his nose on a colander.

I am so glad it was an "easy" fix for Ezra. Hope he continues to do well.

That is so, so great. Hail the internet village!

Thank you for sharing this Amy! I had no idea that was even a thing, but it makes sense in our technology-laden world! I might get a pair for myself too as I sit in front of a computer 9-10 hours a day!

After two years of migraines with my 17 year old (where anxiety and hormones were blamed ) I had her eyes tested... perfect Vision but sensitivity to ligh and lazy muscles in her pupils (arent contracting fast enough in light) she now wears reading glasses (to strengthen the muscles) with the light filter in them. 2 months later and we have seen a HUGE improvement. At one stage we were concerned about a possible eating disorder as she was often nauseous to the point of throwing up. That has stopped since the glasses. The optometrist told me one of her epileptic patients he shown a huge improvement since wearing light filter glasses. I never even knew they existed before my daughter got them !

The one thing in have had to say to my 6 year old son (I also have a 11 year old son & am a single mom) that I never thought I would have to say is 'You can't stick your penis in things!' It involved a pencil sharpener that thankfully was too small!

Yay! I’m so glad Ezra found something that helps! I’ll be looking into those glasses if I ever return to work and sit in front of a computer under fluorescent lights again. (Aka in migraine hell)

How awesome is the instant pot!? I love mine so much! I’m glad to hear you’ve joined the IP cult. All glory to tasty food!

I'm so glad the glasses are helping! And may I add that the ceiling also is not a hand towel? Literally, hand prints on the ceiling of at least two rooms in my house.

Ohhhh... I think you need to do onre of your recipe posts like you used to do when the boys were little!! I too have an instant pot and want to hear all the things you've cooked in it!!

I just adapted Smitten Kitchen's broccoli cheddar soup for my IP last night and my husband, my 1 year old and myself almost ate the entire recipe... :(
Also, pumpkin steal cut oats is my favorite thing to cook in the IP. Dessert for breakfast, yum

I'm the dyslexia/dysgraphia/scotopic specialist for my school. I would suggest you have Ezra screen for scotopic sensitivity (Irlen Syndrome). The fact that the glasses have helped so much suggest a light sensitivity. He might need specific colored overlays when reading or taking tests. Your school should be able to screen him and provide the overlays :)