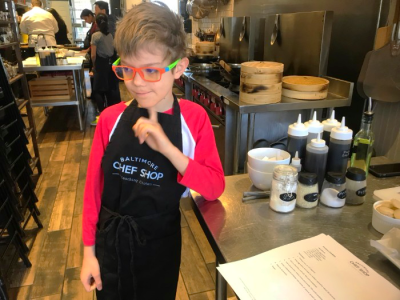 Ezra and his magic glasses attended his first for-real, serious cooking class. It was everything he dreamed of and more. 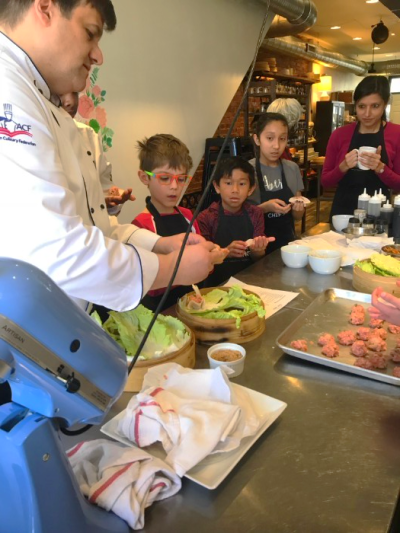 It was taught by a for-real, serious chef, who complimented his knife skills as "perfect." 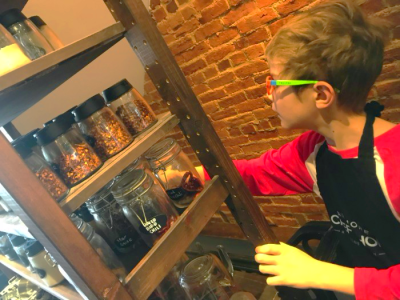 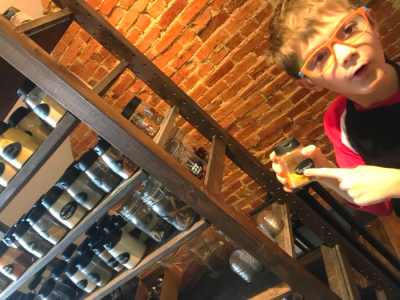 It took place in a for-real, serious chef's kitchen, stocked to the rafters with every spice and kitchen tool imaginable. He was allowed to explore and touch and taste whatever he wanted. 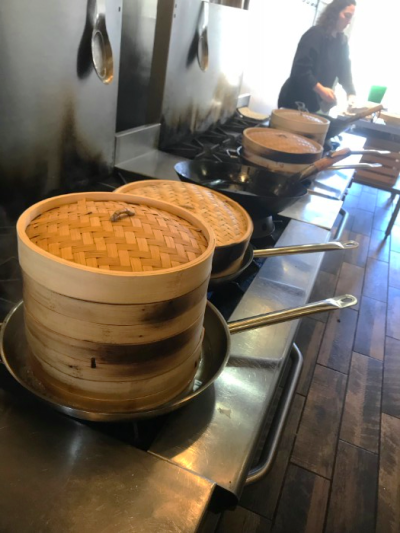 He chose the Dim Sum class because it sounded the "most hardest." (Also because of Kung Fu Panda, I'm pretty sure.) 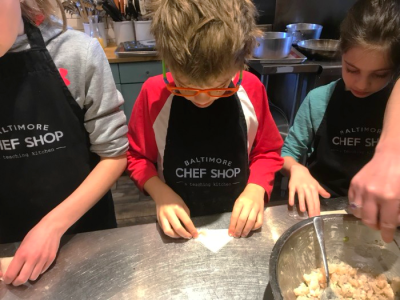 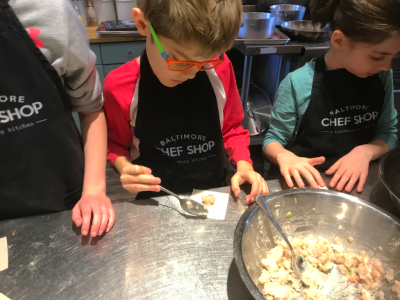 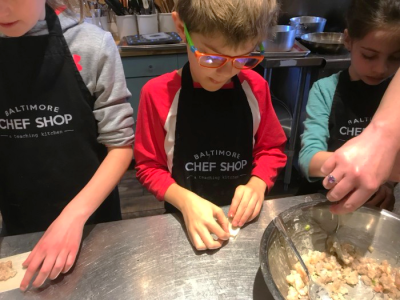 We made a variety of dumplings and spring rolls, with different fillings and folding/rolling styles.

He and I were tasked with making the shrimp dumpling filling for the class, and he admirably did almost all the chopping and measuring and even dug into peeling and de-veining the shrimp, which neither of us had ever done before.

(He did ask me what the black stuff was and I told him that it was shrimp poop, which embarrassed him. "You didn't really need to say that," he told me, but then carried on bravely with his de-pooping duties.)

(Turns out I don't have an actual shellfish allergy after all, but more of a "sensitivity." So I try not to eat it every single day for multiple days in a row while ignoring hives and stuff. I keep Benadryl on hand just in case, but I've been just fine for awhile now.) 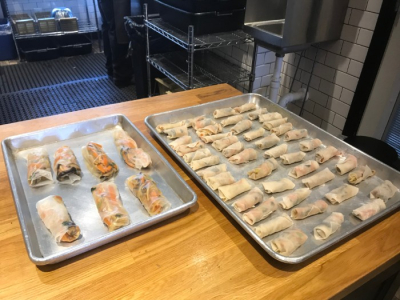 We made so many dumplings we ran out of space in the steamer baskets, so Ezra suggested we fry some like the spring rolls. "That's a good idea," the chef said. "Let's try that." 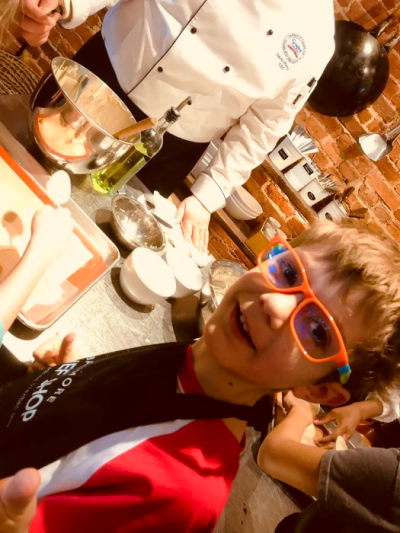 Ezra gripped my hand and pulled me close. "The chef liked my idea!" 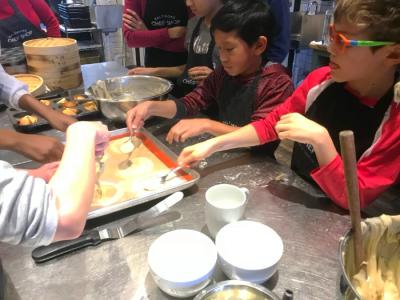 I ended up on the fryer duty, while Ezra got SUPER into fortune cookie baking. The cookies were filled with fortunes written by all the young chefs, and a few from us parents. 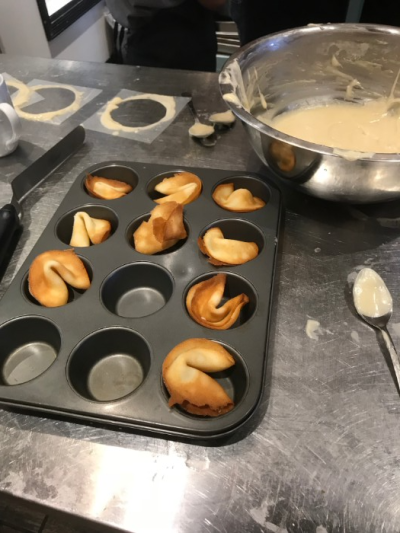 I got one of Ezra's, which told me I had "nice cooking skills." A little girl at our table got mine, which said she'd make a lot of new friends.

She pointed at Ezra and laughed, "Look, it came true!"

They both watch a lot of the same cooking shows, it turns out, and have started work on their very own cookbooks.

(Another girl at our table had never cooked before at all and didn't even know what a measuring cup looked like. By the end of the class she'd made an entire batch of cookie batter all by herself and was producing absolutely perfect spring rolls..) 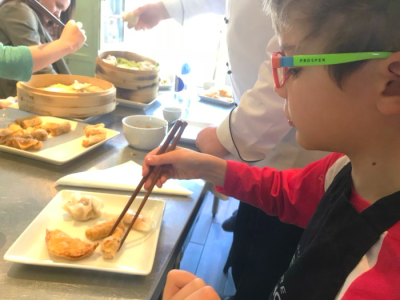 We all stuffed ourselves with several of everything, and while the kitchen's license doesn't allow for carry-out food, Ezra was allowed to take home enough leftover fortune cookies to share with his dad and brothers.  The chef correctly guessed he was the middle child, and asked what made him interested in cooking.

"I love to EAT!" he said, then looked at me and asked how old he was when he made food for the first time.

"You were about four," I said, trying to do some quick math. "You helped make baby food for Ike all the time, and then you started helping with dinner around that time too."

The chef told him he did a great job and mentioned he also teaches the pizza class for kids.

"Oh I kind of already know how to make pizza," Ezra said. "But I can come back to help you!"

We stopped for a scoop of ice cream with the class afterwards, just to keep the fun going a little longer.

"That was the best morning of my entire life," he sighed with happiness when we got back to the car. "Can I make dim sum for dinner one night this week?" 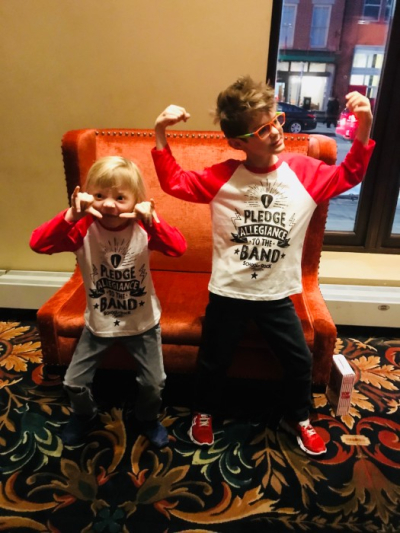 Yes you can, Chef! Yes you definitely can.

My heart is so happy for Ezra! Glad he got to participate in this opportunity with a for real, for serious chef!

GAHHHH!! I love this kid SO much! #Storchkidstoriesarethebeststories

I love this. Your kids are so lucky to have you supporting their interests. Great job Mama.

So great to read this. You can just tell how happy you both were with the experience. I love the optimism of little kids. I wish you could bottle it and use it as adults!

Does he prefer Chez Ez, or Chef Zah?

OMG the cuteness. I die.

Um, this made me cry. Giant happy tears of magical happiness for you and your awesome kid. I'm glad it was such a great experience!

Wait wait wait. A kid to make you dumplings once a week? IS THIS WHY PEOPLE HAVE KIDS IT IS ISN'T IT

OMG this made me cry I'm so happy for The Mighty Zah. Follow your dream buddy!

I'm not one for commenting, but this makes me so happy. I hope to see his face and skills on Master Chef Junior some day!!!!

Not to get too far ahead of ourselves, but your local community college has a very good culinary program. Just putting that out there.

Amy, STAHP with the onion cutting. I am all verklempt over here!
I live that Mighty Zah is embracing his cooking and learning so many new things. While I know I will never marry him, I may one day get to eat at his restaurant.

What a wonderful experience for both of you. This is a memory that you will always have.

Do emojis work in the comments? If so, ❤️

I love this SO much!!! Mighty Zah is going to be the next Master Chef Kids Champ. I love that he already has such an interest in something and, even if that changes, you KNOW he'll put his all into anything he tries. Great job buddy!

Thanks for joining us in the kitchen! We are so so so glad he had fun - that’s our goal. PS: This warmed our hearts - he’s precious!!

I’m totally allowed to have internet kid favorites, and Ezra is mine! Has been since he was wee, and he just keeps getting better.

Consider this my preorder for his cookbook.

Oh. My. God. You are literally mom-of-the-yearing it up over here. This is literally the most heartwarming thing I've read all day. When he said the chef liked his idea my heart just about exploded. Go you, super mom!

"But I can come back to help you!"

I literally laughed out loud with joy. ❤️

Oh, Zah! I totally smiled throughout this entire post! You rock!

I'm not crying. You're crying! Seriously good post. That looked like such a great time for you both. So awesome!

oh. this kid. he melts my heart every time!

Holy guacamole, that is so awesome.

I need the “I pledge allegiance...” shirts! My 11 year old LOVES that movie!!

Okay, I'm glad to know from reading the comments that I'm not the only one who cried at this story! When he was excited about the chef liking his idea, and then when the little girl said the fortune came true...good grief, you got me!