This post is sponsored by Blue Apron.  The first 100 people will receive $40 off their first two weeks of meals here!

My husband finally caved to the Internet Multi-Cooker Hype and bought us an Instant Pot. He bought it just a couple weeks before Valentine's Day, which is when I planned to buy him an Instant Pot, because he loves to blow up my gifting spot every. Single. Holiday. (He got socks for V-day.)  He is MORE THAN A LITTLE OBSESSED WITH IT.

Me: OMG WHAT'S HAPPENING IS HE GETTING IMPEACHED

Him: (shows me yet another Instant Pot recipe)

(After I finish this post I've been tasked with taking his precious Instant Pot full of his precious pork chili verde to his office to enter a cook-off on his behalf because he's stuck in meetings elsewhere. It's cute that he thinks I know how to turn the thing on, let alone how to not burn the building down.)

(UPDATE: He won first place. I graciously accepted the award on his behalf. If he asks, just tell him about the spoon.) 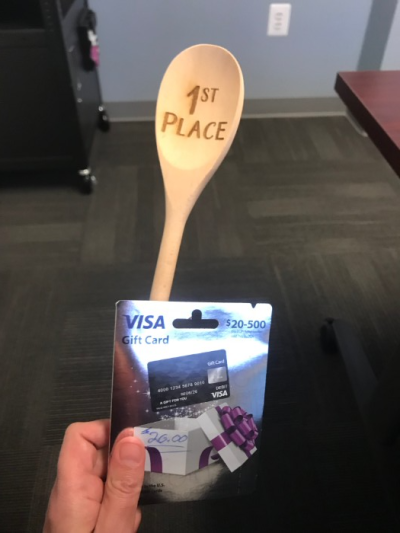 While I love his enthusiasm for his new toy (and all of the recipes he's made in it so far), letting him take full control of our weekly menu planning and grocery shopping is a total no-go. He goes overly elaborate and overbuys ingredients (i.e. a pound of carrots when he only needs one; a full bunch of cilantro when he needs a tablespoon) and never remembers to double-check that we have the ingredients he thinks we do, requiring even more trips back to the store.

(And more impulse buys. We needed some rice flour but look, they had cookies.)

So our compromise has been that we continue with our Blue Apron subscription for three weeknight dinners every week, and then he's free to pressure cook whatever else he wants the rest of the time.

NOT ENOUGH, SAYS HE. I can totally make Blue Apron recipes in the Instant Pot, says he.

Which means I'm proud (albeit initially dubious) to present our first installment of: 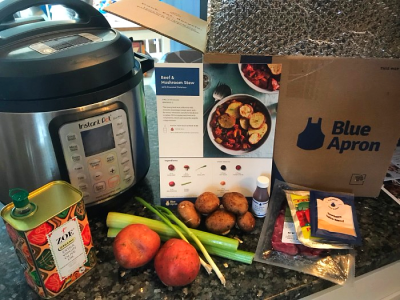 One of our recipes last week was a beef & mushroom stew, topped with crunchy roasted potatoes. Jason felt this was a strong candidate, and I had to agree. 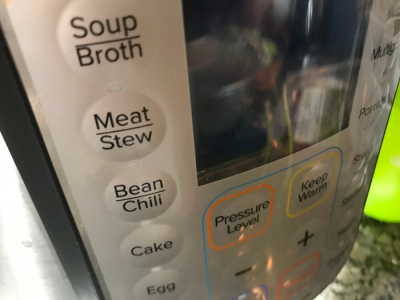 I mean. There's a button right there for it. What a time to be alive. 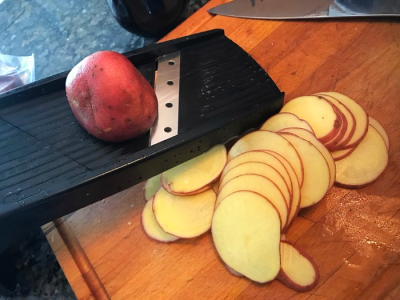 I handled all the vegetable prep, since Jason is no longer allowed to use the mandoline after losing part of his finger that one time. 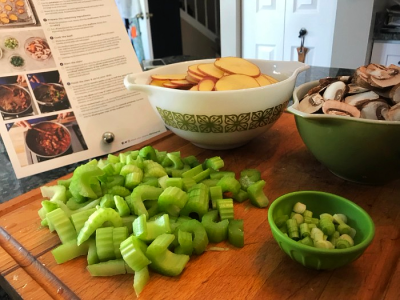 I also opted to roast the potatoes the old-fashioned way, in our horrible, useless oven. 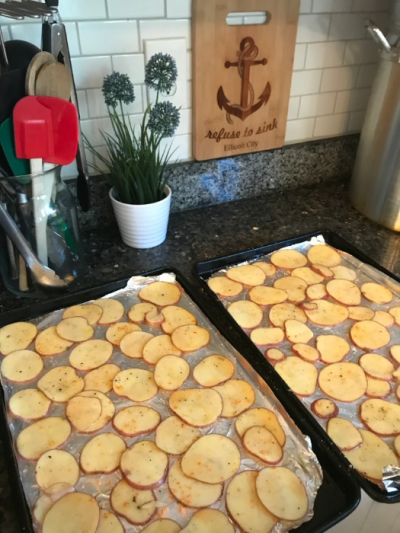 Though because I am A Rebel, I topped them with some of the extra Blue Apron spice blend even though the recipe didn't say to do that. IT'S ANARCHY OVER HERE.

(These are photos of four servings of the 2-person plan, by the way. We get two separate boxes  of that vs. the 4-person family plan. Which we've tried and is very good; we just find the 2-person plan portions better suited for two adults and three kids and our various appetite sizes.) 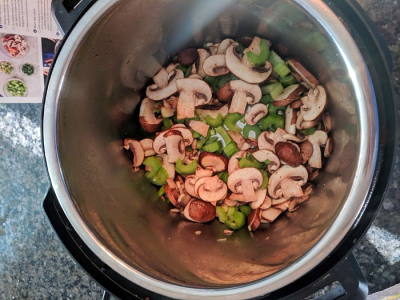 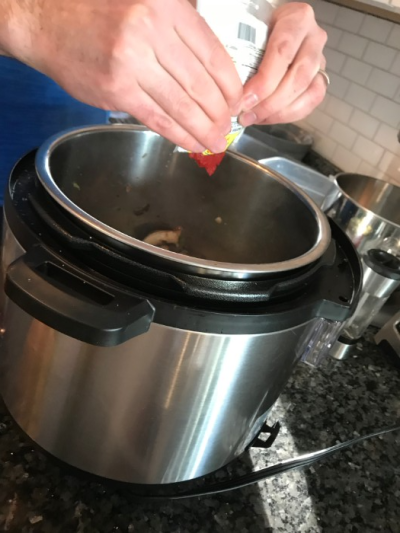 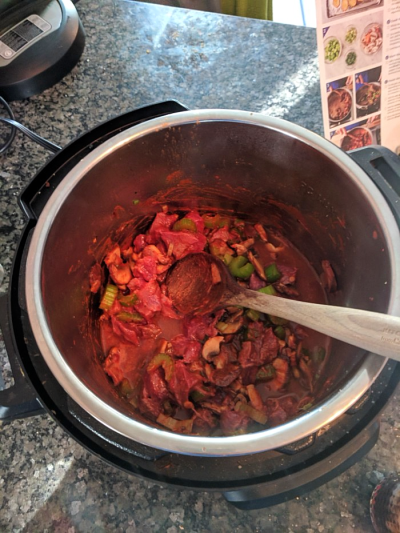 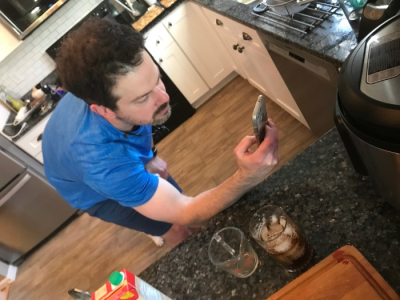 Jason handled all the sautéing, saucing and being a Good Blogger Husband. 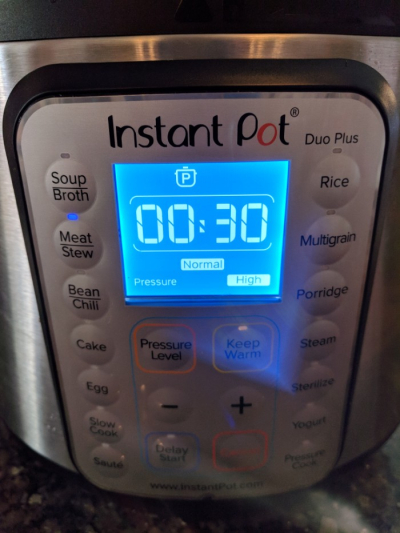 He took this photo to be helpful. 30 minutes on the Meat/Stew setting with high pressure. We cut back the recommended liquid by half and swapped water for beef broth. 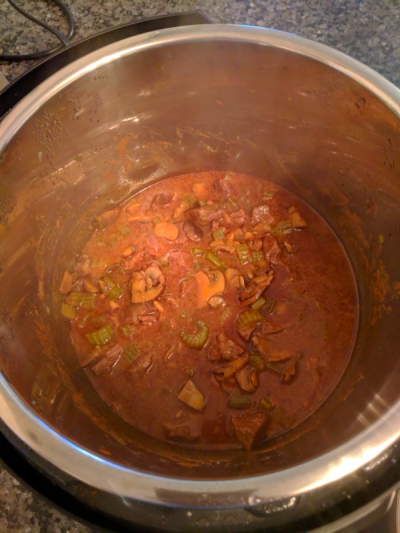 Post-pressure cooking, we added a thick soy glaze from the BA box and let the stew simmer a bit until it was properly thickened.

So. DID IT INSTANT POT?

It did!! I don't think it necessarily saved us any time  -- following the step-by-step instructions from Blue Apron puts the estimated prep/cook time as between 30 and 40 minutes and we were definitely on the high end of that, if not a bit over. (Next time we'd cut the added liquid down even further, which would have save us some simmering time at the very end.)

But there was no denying that it looked and smelled absolutely delicious. The whole house smelled heavenly. 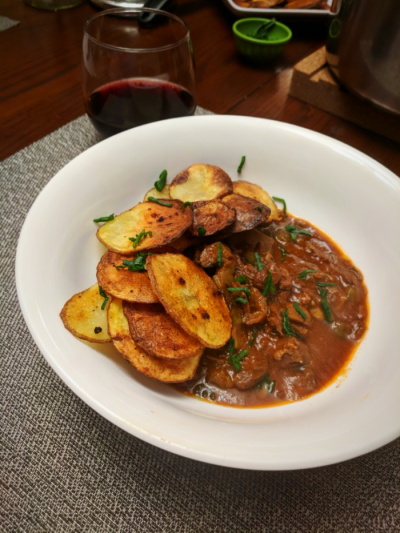 In fact, this was probably our most successful attempt at recreating the photo on the recipe card. It tasted even better than it looked. The meat and vegetables were cooked perfectly and the broth tasted like we'd had it simmering on the stove all day. (WOULD IT CROCK POT? Yep, I bet it totally would.)

The kids really loved it (I mean, it's meat on a potato chip) and Ike even declared a total reversal on his previous opinion of mushrooms. They were Bad before. Now they are Very Good.

So if you've been on fence about Blue Apron because you worry you'll lose your chance to experiment in the kitchen or try new cooking skills and gadgets, hopefully this might change your mind. I've learned soooooo many new techniques and tried even more unusual ingredients during our years and loyal Blue Apron customers, and this ALSO goes to show that the recipes are pretty solidly fool-proof, and you're not going to ruin dinner and order a pizza instead because your husband just HAD to play with his shiny new kitchen toy.

A few other things I love love love: You can now choose from EIGHT recipes each week (instead of six), you can get ANY combination of recipes, and each week always features something a little different like a take on a Top Chef winning dish, Whole30 or Mediterranean Diet-approved meals, one-pan 30-minute meals, you name it.The boxes are refrigerated and your food stays super cold and fresh even you completely forget that it's on your front step until the next day, like....whoops.

(That was us. Everything was fine.)

Thanks again to Blue Apron for sponsoring this post!  And now on to the deal: The first 100 readers will get $40 off their first two weeks of Blue Apron! Just click here!

My son got me an Instapot (but it's a Cosori) for Christmas, and that pork chile verde was one of the first things I made in it! It was so easy and delicious; those judges who gave him 1st Place were correct! And the leftovers made wonderful tacos, burritos, and I think chilaquiles tomorrow night.

And I made the corned beef and cabbage in it over the weekend. I don't eat the stuff, but it was the easiest ever, didn't smell up the house so much, and less shrinkage :) .

Sigh. I miss Blue Apron. We moved from California to Hawaii a year and a half ago. No boxed food delivery here :( But yeah, Hawaii, so I'm dealing with the tradeoff. I mean, it's Hawaii. I do, however, LOVE my Instant Pot.

You must have far better luck actually getting all of your ingredients in your Blue Apron box! After several weeks in a row where something was missing, we had to stop. Really a bummer, because we liked them a lot, too.

I constantly have impeachment conversations like that, with pretty much everyone I know! :-)

That stew was so. good. Even prepared the traditional way. I saved the leftover spice mix for a remake on my own.

Great minds must think alike: I instant-potted this recipe too! And I'm so lazy that I just tossed the potatoes in the stew, plus some carrots to stretch for leftovers. I was off Blue Apron for a while, but they've really upped their recipe game, and being able to choose any combination from eight different meals makes it more likely that I'll find two or three that work for us.

We are a family of 6-- 2 adults, 2 growing teens, and 2 elementary school age. I would like to try blue apron, but feel like there isn't a plan that fits our family size. Any suggestions?

I have to tell you that I LOVE Blue Apron. I tried it through a link on your site and I LOVE it. I HATE cooking typically, but these recipes are delicious and usually not to complex for me. We do the vegetarian option (so we have less to choose from) and we do it for 2 people, but we almost always have enough food for at least 3, if not 4 or even 5, servings. Thank you!

We get Blue Apron once a month. After totally overlooking a sirloin I decided the next steak was going to be made using my circulator, I don’t care what the instructions say. That turned out way better.

I LOVE my instant pot. If you haven’t already tried it, take a look at the Indian Instant Pot cookbook by Urvashi Pitre. I’ve made so much good, easy Indian food in my own kitchen since that book came out.