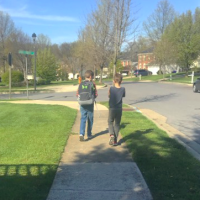 Our official plan was to wait at least until summer before replacing Jason's car. One car really works fine for us, at least when the kids are in school. (Summer camps are a different story, since everybody scatters to different half-day/full-day programs every week.) Jason can usually work from home any day I need the car for meetings or appointments, plus there are plenty of Lyft/Uber drivers around here, and we're honestly walking distance to a lot of things that we don't walk to simply because there's always at least one car in the driveway. Plus, how often do I ever have to go anywhere in person, besides once in a blue moon? Honestly, I'm not that important. The other day I realized we were out of bread, and instead of asking Jason to pick up bread on his way home, I just...walked to the damn store and bought the damn bread. In the wilds of suburbia! Like a crazy person! And I learned the secret to not going insane at Target with the impulse shopping: Remember that everything you buy, you have to carry home. Suddenly that decorative ceramic sheep and three-pound bag of clementines aren't quite so tempting.... Read more →

Last night was Ezra's second violin "concert," an elaborate affair that required fancy new dress clothing and shoes, a super-rushed meal at McDonald's in order to make the required 30-minutes-before-show-time arrival, then waiting around doing nothing for at least 45 minutes with his supportive but super-bored siblings. (The amount and sheer intensity of mobile-phone use going on in the background of this photo is impressive.) Finally, about one hundred or so third graders slowwwwwwwwly took to the stage and extended risers, each carrying a stringed instrument that none of them had never touched before last October, proceeded to play three five-minute "songs," and then slowwwwwwwwwwwly filed back out again. It was not quite the assault on my eardrums I'd been expecting, given how green these kids are (and judging from some truly, painfully screechy practice sessions at home). This was their first performance using the bows (last time they all just plucked at the strings and avoided that classic "dying cat stuck in a grand piano" sound), and while I don't know what "Farmer's Hoedown" is technically supposed to sound like, I am pretty sure I could identify their "Ode to Joy" even if it hadn't been printed in the... Read more → 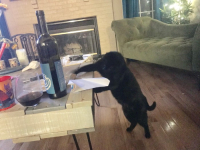 DUMPLING UPDATE: Rey stole a dumpling! CAR UPDATE: The other driver has been found at fault for unsafe lane changing! Jason's car is toast, but they're giving us way more for it than we ever could've gotten in a trade in! We're even getting our deductible back! This is all very good news! Especially because he was putting off like $3,000 worth of repairs and had been ignoring the Check Engine light for months! Let this be a questionable lesson to us all! The bad news is that my husband now gets to shop for a new car and he is never more annoying to me than when he's shopping for a new car. It will take him months and he will test drive every car on earth. He will look at CarMax listing the way normal people look at Tinder. DUMPLING UPDATE II: Finn stole the dumpling! HAIRZ UPDATE: The only person in the world who is allowed to trim Ike's hair now is my hairstylist. Which sounds like it should be a pain, but she doesn't charge me much and swears Ike is always her best-behaved client of the day. Also, despite the holes in his pants knees... Read more →

We spent all winter mapping out grand plans for our yard and gardens. We've now spent most of spring waiting for the weather to cooperate and let us actually plant some damn things. If it would just stop SNOWING, at least, or plummeting down to near-freezing temperatures every night. That would be a nice start. On Saturday we had a rare burst of summer-like warmth and sun, and so we opened all the windows, dug out evertbody's shorts and t-shirts, then joined approximately 56,231,000 other Vitamin-D starved people buying ALL THE GREEN AND FLOWERY THINGS at the local Home Depot. The Adventures of Zah In the Enchanted Forest Minivan The kids all whined horrifically the entire time about the heat and the sun and the sweat and the my baaaaack hurts my leggggggs hurt I am too pale and video-game soft for such torrrrrrture. So once we got home and got everything unloaded and watered and debated ideal shrubbery placement all that, it was on the late side so we planned to wake up early on Sunday and get planting. Of course, by the time we got up it was grey and nasty and cold all over again. And then... Read more →

At Least It Wasn't Me, For Once 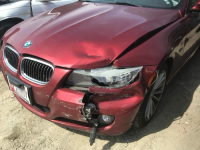 Hey, how was your week? Ours was POSITIVELY SMASHING. He's fine, Jason's fine, everybody is fine. His car... ...not so very much fine. Jason was driving home from work in a right-turn only lane when a car abruptly decided to pull out of the super-backed-up center lane without looking. Horn, brakes, screech, crash. His car suffered the most damage AND since no witness stuck around, he's automatically at fault for rear-ending the other driver. Which is fantastic! We're also assuming his car is a complete loss (we got it used and it's just not worth that much anymore), which is awesome because it was completely paid off and who doesn't miss car payments? WHO, I ASK YOU? RIP sexy Date Night Car. It's gonna be all beat-up minivan hotness around here for awhile. Read more → 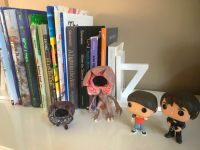 My children, historically speaking (and spoken with all the love and genuine affection in the world), are giant chickens. They've bailed on Disney movies. They run from TV commercials with dramatic music. The mere presence of my Walking Dead comic compendiums on our bookshelf continues to upset them to this day, and they've never even peeked at the pages inside. Every movie or TV show this side of Nick Jr. is met with the same running commentary: Is it scary? Who's the bad guy? Does anyone die? Is there a monster? Who is that? Does something bad happen? You have to tell me before something bad happens, okay? Some of this is entirely our fault, of course, We've made a few bad calls along the way (most notably Guardians of the Galaxy, Fantastic Beasts and Where to Find Them, That One Scene In Force Awakens You Know The One I'm Talking About, etc.) and they don't necessarily trust our assurances that no, really, this movie isn't scary, it's just exciting. But still. Guys. It's Coco! It's Pixar! The only people here who will be sobbing, emotionally traumatized messes by the end will be the adults AND WE ALL KNOW IT.... Read more → 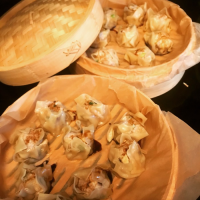 I am in the work weeds right now, the entirely predictable result of daring to take TWO WHOLE DAYS off and then spending the rest of the week ping-ponging around 17 different deadlines in a panic while completing exactly zero of them. So you know what that means, blobs? Time to post a recipe that maybe like three people asked for on social media last week and pretend like OH MY GOD SOOOOOO MANY PEOPLE ARE BEGGING FOR THIS RECIPE I MUST INDULGE THE WILL OF THE MANY, MANY PEOPLE. (But seriously, it's a good recipe. Teach it to your children well and let them make you dinner.) Chef Zah's Shu Mai (Steamed Pork, Shrimp & Mushroom Dumplings) (Adapted from dumplings we made at the Baltimore Chef Shop, with a few tweaks courtesy of Ezra) Ingredients: ¾ lbs. ground pork ¼ lb. shelled raw shrimp 1/2 cup fresh mushrooms (we use Shiitake, stems removed) 4 scallions 4 sprigs cilantro 1 small chunk of fresh ginger 1 ½ tsp. fish sauce 1 ½ tsp. salt 1 ½ tsp. cornstarch 1 large egg 2 tsp. toasted sesame oil Wonton wrappers Napa cabbage leaves (or parchment paper) Soy sauce (optional) Instructions: MISE EN... Read more →

Wednesdays are the New Mondays 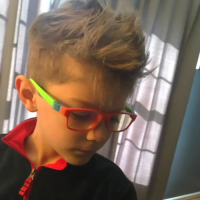 It's hard to believe our spring break was cut drastically short this year after too many snow days, as every one of my children practically leapt out of bed this morning, thrilled at the prospect of school and getting fuck away from each other. It's been five days of a little too much togetherness, apparently. We didn't travel but instead filled the days with bowling, roller rinks, arcades and too many carbs. Oh! And Ezra got a new hairstyle and wanted me to share it with my "blob readers." Here's lookin' at you, blobs! He also finally, FINALLY lost that super-stubborn loose tooth, and had some demands for the Tooth Fairy. (He did not get 20 dollars, as we all know the Tooth Fairy is a punk-ass bitch around these parts.) Other exciting things that happened: We painted the master bedroom and bought a bedspread online that doesn't match anything like I thought it would, Poppy caught a squirrel and left its wheezing, flinching not-dead-yet carcass on the deck for me to find, and last night I had a dream about eating a fish that suddenly sprang to life mid-meal and flopped off the table and proceeded to bite my... Read more →