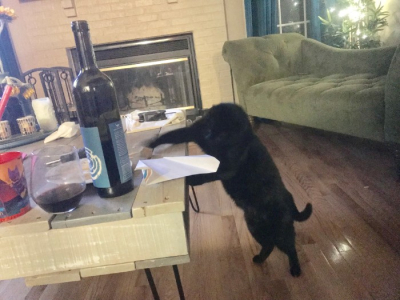 The other driver has been found at fault for unsafe lane changing! Jason's car is toast, but they're giving us way more for it than we ever could've gotten in a trade in! We're even getting our deductible back! This is all very good news! Especially because he was putting off like $3,000 worth of repairs and had been ignoring the Check Engine light for months! Let this be a questionable lesson to us all!

The bad news is that my husband now gets to shop for a new car and he is never more annoying to me than when he's shopping for a new car. It will take him months and he will test drive every car on earth. He will look at CarMax listing the way normal people look at Tinder. 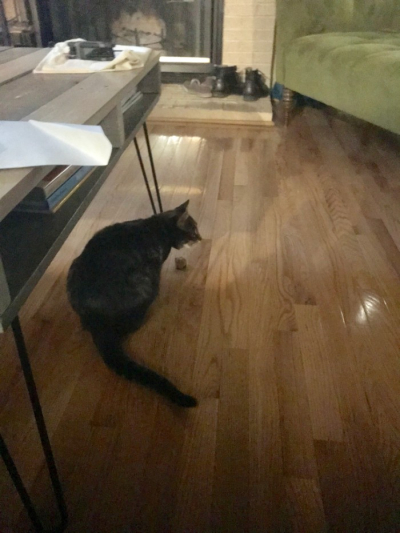 The only person in the world who is allowed to trim Ike's hair now is my hairstylist. Which sounds like it should be a pain, but she doesn't charge me much and swears Ike is always her best-behaved client of the day. 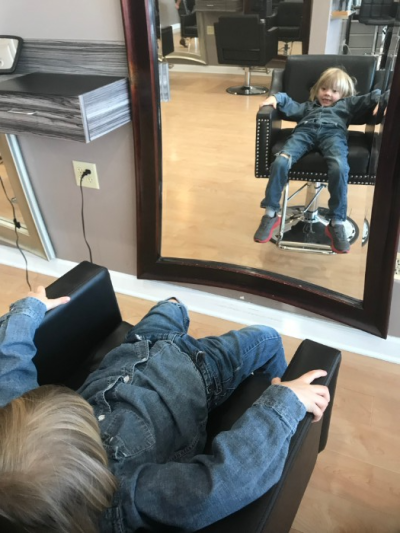 Also, despite the holes in his pants knees (COME ON CUT-OFF WEATHER I AM NOT BUYING THEM MORE PANTS) this is Ike's attempt at dressing up to impress his "Hair Teacher."

Rey has reclaimed the dumpling. HOW TO GET LIPSTICK OFF OF A CAT UPDATE:

If one of your children decides to:

I recommend a little nail polish remover and a cotton ball. Preferably gently applied before you attempt to pull your hand off the counter.

Poppy ate the dumpling. And Noah's extra-credit wooden car. Luckily we found all the nails?

I *just* glued the tube of super glue to my thumb (like, my whole thumb) last week. I mildly panicked while my husband googled (because I only had one hand) how to get it off. Nail polish remover worked like a charm :)

We have a new cat since we had to send 21 year old Savannah to the Rainbow Bridge a week and a half ago. Sakura is a year old calico who has quickly won our hearts. She seems to think that all. The. Foods are kitteh food, be they hooman or kitteh foods. And like a typical toddler, she does not like that "no" word!
Great news on the car. My hubby is like Jason, only his is shoes! That man can hem and haw over a pair of shoes like no other man on earth!

"He will look at CarMax listing the way normal people look at Tinder."

Loved this. This is totally my husband too, even if he has no real reason to go car shopping. I am so, so glad this situation worked out for you guys - you are good people and you totally deserve some good luck <3 <3 <3

Oh my gosh the superglue story was sending me into a panic!!!! I didn't know nail polish remover did that and am filing that one away for later. Whew!

I glued my little toe to the wooden floor (a slight drop on the floor I didn't notice.) Had a full blown minute of panic as only my elementary aged kids were home at the time. Luckily I was able to get what I needed to get loose lol.

Love how Rey and Finn investigate the dumpling and then, to be sure it's not poison, let Poppy eat it. Rey: "Hey Finn, this thing smells okay, but I'm not sure." Finn: "Let's get Poppy! She'll eat it. She'll eat anything!" Together: "She likes it! It's not poison!" Aaaaaaaaaaand scene.

I hope Noah at least got his extra credit first!

"He will look at CarMax listing the way normal people look at Tinder."

THIS!! When we were first dating I caught my boyfriend *what I thought* was checking out another woman multiple times and every time it was a damn car. Now after 9 years I know it is a car and look over my shoulder into the lanes of traffic instead of on the sidewalk.