At Least It Wasn't Me, For Once

Hey, how was your week?

Ours was POSITIVELY SMASHING. He's fine, Jason's fine, everybody is fine. His car... 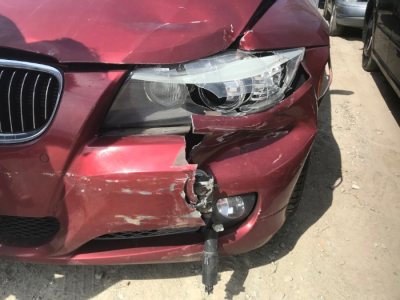 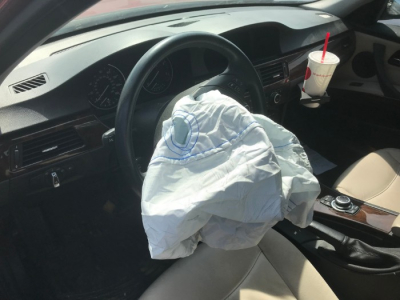 Jason was driving home from work in a right-turn only lane when a car abruptly decided to pull out of the super-backed-up center lane without looking. Horn, brakes, screech, crash. His car suffered the most damage AND since no witness stuck around, he's automatically at fault for rear-ending the other driver. Which is fantastic! We're also assuming his car is a complete loss (we got it used and it's just not worth that much anymore), which is awesome because it was completely paid off and who doesn't miss car payments? WHO, I ASK YOU?

RIP sexy Date Night Car. It's gonna be all beat-up minivan hotness around here for awhile.

Oh that sucks. But I'm so glad Jason is ok. Scary stuff! Going to one car for a while also, yuck. Been there, done that for way too many years. Here's hoping you find something that works for the budget!

In my experience, a good insurance adjuster can tell from people's stories and the location of damage on the cars, who is truly at fault... hoping you have pics of the scene and the other car. Good luck.

Have the intersection camera video pulled. Almost all the major intersections in MD have them now.

That Jason is ok is what is most important. Agree with what others have said. Get some video and a good adjuster and/or attorney.

So very glad Jason is fine, but situations like this are why I think it's totally worth it to use a dash cam, and Amazon has quite a few at reasonable prices. That and lying liars who make poorly timed left turns, refuse to stick around for a police report (and I was too timid at the time to just call them anyway), making it impossible to get her insurance to do anything about the damage.

Update! Our claims adjuster is calling BS on the other driver’s story after seeing the photos. Sadly no camera caught the accident, but our insurance (HI STATE FARM LOVE U) has decided to fight the liability point.

I am going to miss that pretty car though. :(

Well that sucks. I’m glad Jason is okay and hope that your insurance company figures out what really happened.

Just happened to me in December. Guy turned in front of me and I t-boned him. Totalled my Highlander (Duncan... RIP... I LOVED THAT CAR!). We had both my car and my hubby's truck paid off. Now we have an unexpected $350 car payment and hubby's truck is about to die. WONDERFUL. Glad Jason is fine though!

I used to be a SF adjuster. Liability investigations were an important part of my job. Glad to see it still is.