Our official plan was to wait at least until summer before replacing Jason's car. One car really works fine for us, at least when the kids are in school. (Summer camps are a different story, since everybody scatters to different half-day/full-day programs every week.) Jason can usually work from home any day I need the car for meetings or appointments, plus there are plenty of Lyft/Uber drivers around here, and we're honestly walking distance to a lot of things that we don't walk to simply because there's always at least one car in the driveway. Plus, how often do I ever have to go anywhere in person, besides once in a blue moon? Honestly, I'm not that important.

The other day I realized we were out of bread, and instead of asking Jason to pick up bread on his way home, I just...walked to the damn store and bought the damn bread. In the wilds of suburbia! Like a crazy person!

And I learned the secret to not going insane at Target with the impulse shopping: Remember that everything you buy, you have to carry home. Suddenly that decorative ceramic sheep and three-pound bag of clementines aren't quite so tempting.

(Not to say that I literally ONLY bought a loaf of bread that day at Target. We also needed razor blades and Sunbutter, and it's not like two pairs of super-cute flip flops really weigh all that much, right?)

One day Jason got stuck in a meeting at work and Noah needed to be picked up from his afters school jazz program. Jason texted that he thought he could duck out early after all and I told him never mind, I was already halfway to the middle school* to walk him home. Ike and Ezra came with me and found it to be a fine adventure, and picked me an impressive bouquet of dandelions. 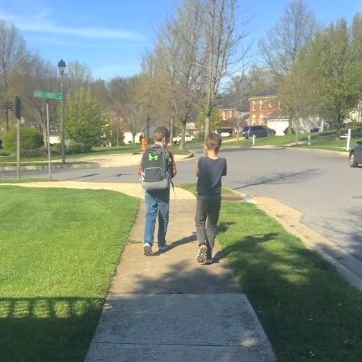 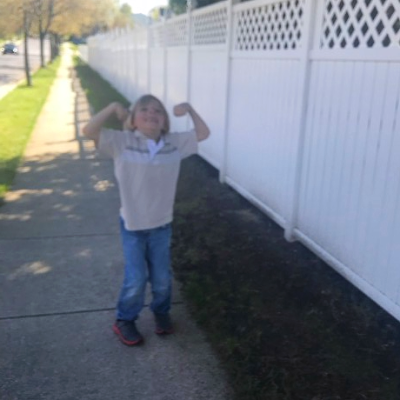 *Noah could technically walk or ride his bike to school all the time, but he has to carry his saxophone to and from school every single day, which is super heavy and awkward. Between that and his 50-pound backpack**, he opts for the bus instead.

**His backpack doesn't need to be 50 pounds, but he insists on carting the full contents of his locker home every day. Like many Spectrum kids he struggles with organization and planning, and has decided that just bringing every textbook and binder home is easier than having to make snap decisions in the few minutes he gets before the buses start leaving.

In other words, I was ON BOARD with the one-car plan. I was going OUTSIDE. And WALKING. And CATCHING SO MANY POKEMON.

Someone needs a white t-shirt for an art project? I can carry that! Call from the elementary school health room because someone's running a fever? I'll be right there! Eventually! A mile walk in the fresh air will be good for 'em anyway! Uphill! Both ways! And etc.

You see where this is going, right? 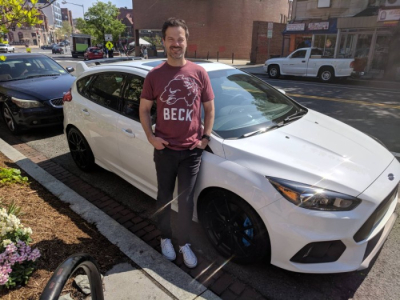 Jason bought a new car on Friday. Once he made up his mind and found a good deal that was...pretty much that. It's a Ford Focus RS, which is quite speedy and fun. At least to ride in, as far as I can tell, since it's a stick shift and I haven't driven a stick in about a decade. Jason keeps insisting it'll come right back to me, like riding a bike, at which point I remind him that I nearly crashed into the woods the first time I took my new bike out last summer. Let's not crash the shiny new car into the woods, okay?

Anyway, we're out of bread again. And running low on cereal. The trusty minivan is in the driveway but meh. I think I'll go for a walk instead.

Close enough to walk to Target?! I'm so jealous!

I live in London, in the UK, and we don’t have a car and I love that it makes me walk! Public transport is amazing of course but now we’ve been here a while, friends and work have ended up being near enough to walk to most of the time. Walking is underrated! Glad you’re enjoying it. It’s so good in spring and autumn especially.

Not only am I envious of the walking to Target, I am envious that you have a Target, period. In the hinterlands, it's a trek of 90 minutes in the car, one way. Definitely cuts down on the impulse shopping if you're never in the store!

Does Noah have a 504 Plan? My son with dyspraxia who is in middle school has in his 504 that he has an extra textbook for every class that stays home. The other one stays in the classroom. It has helped tremendously. I just thought I would mention it.

Has Noah called “dibs” on the Focus when he gets his driver’s license? My 11 y.o. son is already plotting to take over our Civic.

I TOTALLY second that Noah’s IEP should include a second set of all text books needed at school for at home! As a teacher, this is the first thing I suggest for all my IEP/ 504 students! Especially in middle school!

LOL I scrolled down to the comments to suggest a set of home textbooks as well! Very common IEP/504 accommodation. Clearly my IEP needs to target "yelling out answers at the wrong time"!

I didn't drive a stick shift for 10 years. It came right back to me. I was surprised by that.

As someone who dragged more than one saxophone around every day for years in school, I highly recommend something like this: https://www.wwbw.com/Protec-Contoured-Alto-Sax-PRO-PAC-Case-541078.wwbw A hard case (inside, fabric outside), but with a nice soft strap so you can wear it like a cross-body bag and keep your hands free. Possibly/Probably available elsewhere cheaper (thought they do have a nice selection)

My friends who have High School students tell me that none of the kids these days use their lockers. Isn't that insane? My kids are older elementary so we aren't quite there yet, but the older kids all seem to carry every book they own PLUS whatever instruments AND jackets etc. b/c lockers apparently aren't cool anymore. That just blows my mind considering lockers were basically social gathering points when I was in HS.

Once, my youngest went into school and immediately threw up. I had walked him there so I was down the block chatting with a friend when they called my cell to come get him. I hustled back and the school nurse yelled at me for not bringing back my car.

I miss my kids being little, but I don’t miss her.

My husband has a Focus ST. I always say, I can drive it, I just choose not to... of course one day he was out with our big girl in my car (Fusion Hybrid) and I decided to take his car for a quick errand... well, didn’t make it out of the driveway because I totally forgot that there’s an extra button to put it in reverse... so, yeah. Would have sucked in an emergency. I plan to practice as soon as we get settled with the newborn.