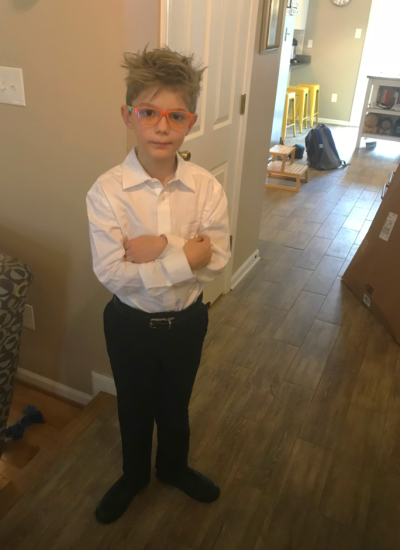 Last night was Ezra's second violin "concert," an elaborate affair that required fancy new dress clothing and shoes, a super-rushed meal at McDonald's in order to make the required 30-minutes-before-show-time arrival, then waiting around doing nothing for at least 45 minutes with his supportive but super-bored siblings. 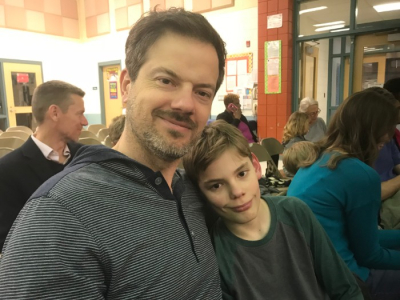 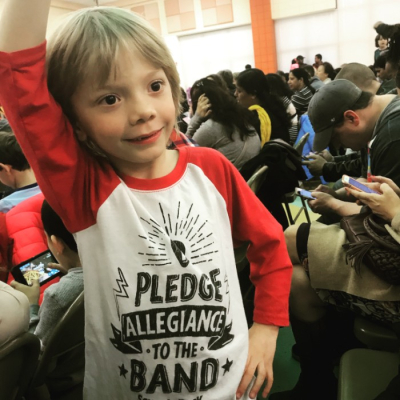 (The amount and sheer intensity of mobile-phone use going on in the background of this photo is impressive.)

Finally, about one hundred or so third graders slowwwwwwwwly took to the stage and extended risers, each carrying a stringed instrument that none of them had never touched before last October, proceeded to play three five-minute "songs," and then slowwwwwwwwwwwly filed back out again. 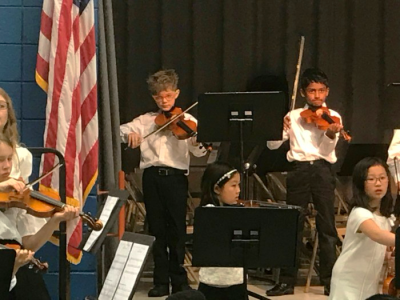 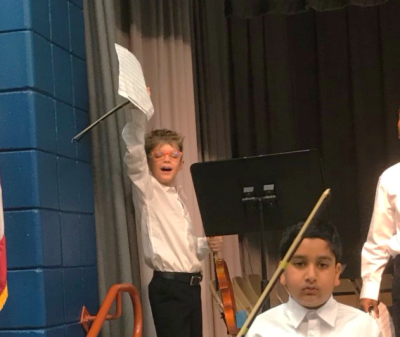 It was not quite the assault on my eardrums I'd been expecting, given how green these kids are (and judging from some truly, painfully screechy practice sessions at home). This was their first performance using the bows (last time they all just plucked at the strings and avoided that classic "dying cat stuck in a grand piano" sound), and while I don't know what "Farmer's Hoedown" is technically supposed to sound like, I am pretty sure I could identify their "Ode to Joy" even if it hadn't been printed in the program. 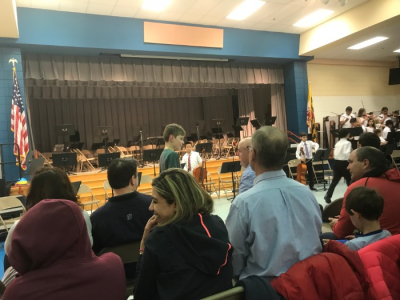 Noah got to experience that special rock-star feeling a middle schooler visiting his old stomping grounds. Here is he is chatting up his former band conductor, and later he confirmed that the fifth grade Golden Lunchbox award (seen here and also here) is still adorned with the very same American flag and patriotic stars that he, NOAH C. STORCH, personally decorated it with last year. This was incredibly exciting, as if they'd renamed the cafeteria after him.

And Ezra got that special rock-star feeling of, you know, being an actual rock star. 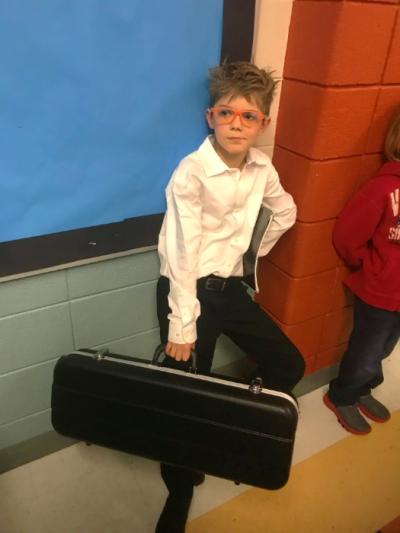 Luckily he still makes time for his biggest fan. 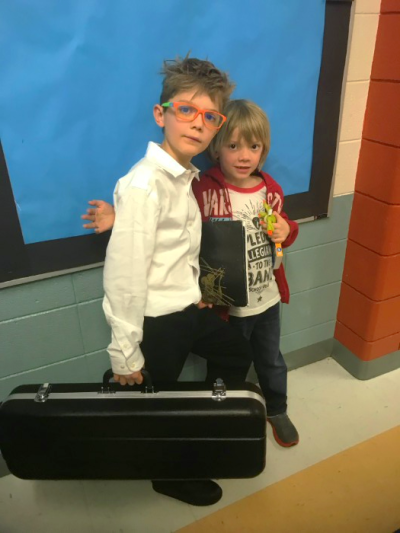 He's so impossibly CUTE! I love hearing about your boys growing up and becoming "themselves", you know what I mean? They are all so unique and it's been trippy going on this journey with you (I've been following since Noah was born!). Thanks for sharing them with us. :)

I heart this post so much! Is it wrong that my family loves you and yours even though we're just interweb strangers?

Kinda like The Grinch, I think my heart just grew! That Noah is still much loved at tye Elementary school. That Mighty Zah truly IS a rock star. And that Not A Baby Anymore Ike had on the best possible shirt he could have worn. You guys are great!

I didn't think this kid could get any cooler - and then he went and got technology glasses & an awesome haircut! Way to go Ezra! You are rocking it!

Uh, real quick - who is that man with your husband and where is Noah?

Congratulations on your performance Ezra! Fantastic work! My son Nick is in 6th grade and in his second year of violin. He wants to continue next year, but he's really going to have to up his practicing if he wants to stick with it because while his classwork grades are ok, homework grades are bringing his report card down. Frustrating! Let me know if you have any secrets to getting Ezra to practice!

They are all so adorable. I love the picture of him with the case. He looks SO cool!!!! beautiful family!

Just heard today that your county (which is also my county; I don't stalk your county for news mentions) was named one of four in the state as "Best Community for Music Education."

That is just way too adorable. The glasses! The coolness! The brotherly love!

Good job Ezra! Having sat through many of these concerts myself, I can tell you that the improvement that happens over the days, weeks, years is amazing and it's so fun to look back at these days. ALSO! Oh my! Noah no longer looks like a little boy but now a young man. When did that happen?!

Seeing your children makes me question being one and done!

I love that Noah felt so famous! <3

(Reminds-me-curious: did you find any kids’ quantum physics / quantum mechanics books for Noah? I think he’d be SO interested in the subject. Please do let us [me] know if he ever reads some about it. Not the mathematical equations, but rather the concepts explained. There’s also a super interesting and basically easy-to-understand documentary about it on YouTube that I think he’d enjoy and understand. TIME / SPACE TRAVEL with a reference to Star Trek!)