(YES INDEED. WE'RE BACK AT IT AGAIN WITH THIS SHIT.)

About a week ago, Poppy kept mysteriously vanishing from the backyard, then reappearing in the front, running around in a frothy panic of WHAT DO I DO WHAT DO I DOOOOOO. Unlike Beau, she's never been much of a runner or escape artist, and for the life of us we could not figure out what was happening.

The gates were closed and locked on both sides. Jason went around with nails and a hammer in search of any loose posts and I filled in a couple suspicious spots where it looked like she might be digging out underneath. And then yet again, I'd look out the front window and there was Poppy, looking just as confused as I did, like, AGAIN? HOW? WHY?

(Or, if she spotted any of our human neighbors, she was invariably right at their feet and offering up her belly for rubs. I'd run over and apologize and explain the current escapee mystery, and then they'd sheepishly assure me that it was okay, they were totally going to bring her back but just wanted to pet her for a little bit first. Everybody really likes Poppy.)

One day it was raining and she came back crying and panting and completely covered in mud and I had to give her a bath, which she was NOT a fan of. I felt like maybe she'd learned her lesson that time and would knock it off. 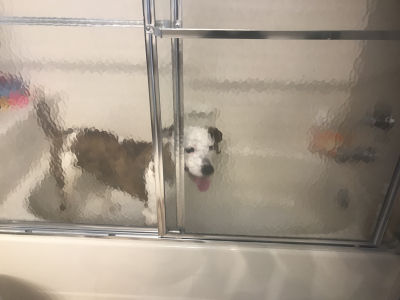 Finally, we figured it out when she did it right damn in front of us. She's just straight-up jumping over the fence. 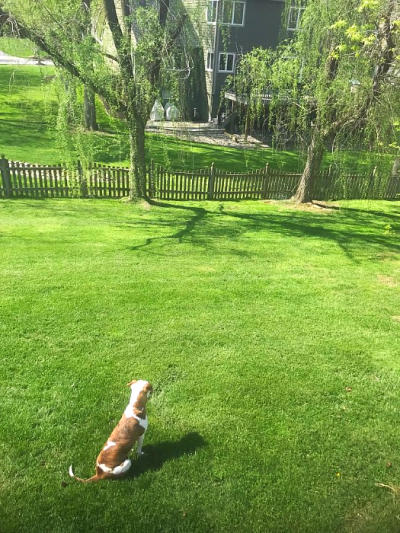 If she spots a squirrel (SQUIRREL SQUIRREL SQUIRREL) in our neighbor's yard, she bolts over the back fence, using her back legs on one of those tree trunks/roots to boost her over.  Once the squirrel gets away (THEY AREN'T ALWAYS SO LUCKY THO), she freezes, runs back to the fence, freaks out, then cuts through another yard to beg to be let back in.

Unless, of course, she spots ANOTHER squirrel, the mere sight of which overwrites literally all other thoughts in her brain. Then who knows where she'll end up.

I don't think a new fence is doable right now, so we've constructed some crude wire fencing around the trees to deter her, and crossed our fingers that she's done growing and won't be able to make the jump unassisted. It's a good thing she's cute, and always comes when she's called. 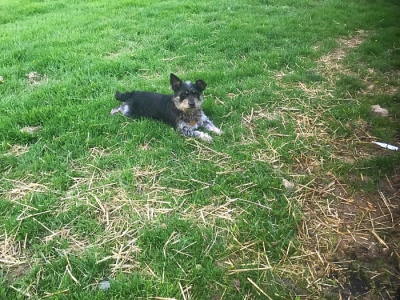 Beau's like, "Whatever, mah runnin days r behind me. I kno where the treats live." 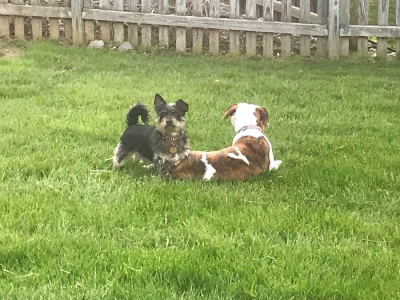 Bonus dumb story for the cat people: A very big angry wasp got in the house yesterday and while we were trying to chase it back outside Finn pounced and caught it. He killed it, but got his poor little paw stung in the process. He was so very shocked, like THAT SUPER-SIZED SKY RAISIN BIT ME and nursed his paw for about 20 minutes while glaring at Jason, who disposed of the dead wasp before Finn ould eat it or toy with it or put in one of my shoes. He is fine, and has likewise learned absolutely nothing. 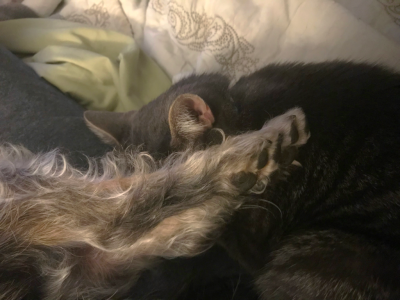 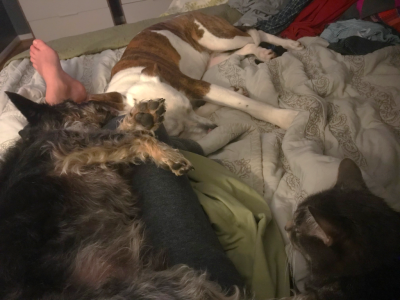 Awwww Beau!!! Has he been changing colors this year? He looks lighter underneath! Cutie pie!

So for jumpers and good canines in general you might want to hire an in home dog obedience trainer, one that maybe specializes in prey drive. Glad she is safe so far! You're doing a great job making sure she stays that way

I am pretty sure if Jason had a blog it would, at some point, include the following line:

P.S. The dogs aren't "allowed" on our "bed" so no one show "Amy" this "photo." with an accompanying photo, LOL. (Do people still LOL unironically? Going with it anyway.)

It's good to have neighbors who love your dogs as much as you do.
I have neighbors who let their fat beagle out sans leash or human and let it wander the neighborhood shitting in everyone else's yard. And when you say something to them about leash laws and yes, we all live on an acre or more, but I still don't want your dog pooping in my yard you get this "struck dumb" look and they turn and walk away. I've half a mind to take said poop and deposit it on their doorstep. But they would call the law on me!

We have a fence jumper and no amount of training could overcome it. Hers was separation anxiety, but crating her when we left just resulted in injuries, a damaged crate and a call from the neighbors who had her. (Thankfully, she too is a neighborhood favorite who just went looking for a person to take her in. Because, we had been gone ten minutes and we're clearly never, ever coming back.) Locking her dog door resulted in thousands of dollars of damage in the house. We live in an urban area and the day someone picked her up on the interstate exit ramp (oh my God, dog) I broke and told my husband we were getting an invisible fence. We just bought the supplies and ran it ourselves, mostly just attaching it to the actual fence so we only had to dig a trench in a little area needed to complete the loop. It wasn't bad and made all the difference. It not only keeps her in, but she immediately calmed down and stopped destroying stuff, too. I don't understand the psychology of it. (The trainer thought she'd feel safe in the crate. She definitely didn't.). But, I'll take it and now recommend it.

Our dog can jump our 7ft fence...7 GODDAMN FEET.

We finally figured out an effective dog-proofing system for it since we can’t build a taller one (we just built this new one in September, and 7ft is as tall as we can build in our county without a permit), but this is just ridiculous. Like...just stay here.

We also have an invisible fence for our jumper dog and it works great. Would definitely recommend if you keep having problems with her getting out.

All this invisible fence stuff makes me have to share this - we were at the local creek with our crew one day and this big yellow lab came running down and jumped in with the kids and gave them his tennis ball. He was there playing with our kids, swimming with them, chasing his ball and having a blast for over an hour, and the other families left, and my friends and I were wondering exactly who he belonged to, when his his owners finally showed up. Turned out he lived on the other side of the creek, and all summer long, when he heard kids down at the beach, he'd grab his ball and barge through the invisible fence so he could go play. Just boom, take the hit, and go for a swim. Was worth it, Mom.
Has nothing to do with Poppy, I just love that story. Big old happy dog.

I am third-zing the invisible fence. You can totally do it yourself, and you don’t have to do the whole yard - you can spot wire. You lay the wire down single strand where you don’t want the dog to go. Then you twist the two wires together on the way back to the plug. It doesn’t work particularly well with dogs that have a high pain tolerance / totally chill attitude about everything like a lab or a Newfie. But with a super short coat and a slightly nervy tempement, it could be a solution. We had one problem spot in the middle of our yard where the dog would dig and dig. I don’t know what was in there, but it made her crazy. Finally we strung invisible fence around that 60 square feet and DONE. She never got in there again.

Someone needs to make a LoJack for dogs. I would totally buy that.

My parents have an invisible fence. We had a dog who would go out and walk the perimeter, testing the fence for weak spots. When he found one, he'd jump over it (my sister actually saw him do this once). He did this every. damn. time. he went outside. He never went very far, but he also would never come back inside the perimeter on his own--I suppose the shock was only a deterrent against coming back into the yard?--we always had to fetch him, take the collar off, and pretty much force him to walk back home with us. So, not trying to rain on the invisible fence parade, and certainly try it if you're so inclined. But it isn't a guaranteed solution.
Good luck, I hope your wire thingy works for the time being.
I would totally buy a LoJack for dogs!

Your yard has so much green!!! Encouraging to see, as here in Michigan we are having one very late-onset spring.
And the picture of Jason and Poppy is utterly heart-warmingly sweet.

If you think she's at all using the fence top to boost her over, maybe try coyote rollers. They're inexpensive to make. If she's truly just using the trees, I got nothing.