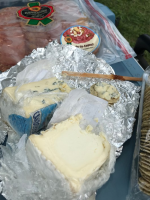 We spent Sunday afternoon in Baltimore at the annual Brew at the Zoo event, where the biggest challenge we faced was that Jason packed up our cooler full of fancy cheeses and crackers but no knives. After a futile search among the food vendors for a plastic knife, Jason said he had a plan and asked if I was willing to eat a corn dog. WHAT KIND OF QUESTION EVEN IS THAT, I ASK YOU. I quickly purchased and consumed a corn dog and BAM. We had a handy-dandy spreading stick for our fancy cheese. (Twenty years in August, folks!) There was rain in the forecast so I figured we'd have to bail on the early side, while Jason stubbornly refused to acknowledge the slowly swirling dark clouds overhead. "I think they're moving away from us," he insisted, as the wind picked up and blew away our crackers. "I think it's going to miss us," he said, as it started to rain. "No, really, I bet this will pass in a minute," he predicted, as we huddled under a small tent with 400 other people who all called for an Uber at the exact same moment, and I watched my... Read more → 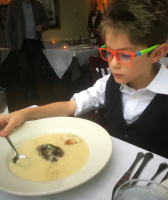 One the Greater Ironies of my Internet career (or perhaps my Biggest Bullshit) is that I am routinely asked for advice on picky eaters. And I give it to people! When in reality, my track record for non-picky-eater creation is more like one out of three. I mean, Noah will absolutely eat what you put in front of him (thanks to this book, and a lot of occupational therapy), but I guaran-goddamn-tee you that when he grows up and moves out he will exist exclusively on boxed mac-and-cheese and dry cereal. And he will love it. His harrowing post-mommyblog memoir will be titled This Post Is Brought To You By Kale Salad, or How #BlueApron Ruined My Childhood. And Ezra, honestly, was just born a good and adventurous eater. Anything that I might have "done" early on that "helped" and could have possibly gotten up on a high horse about (blah blah homemade baby food blah blah restaurants blah blah exposure) was proven to be a load of shit by Ike. Who got all the same food and exposure and hardcore division-of-responsibility stuff as his older brothers, and who has spent almost seven years' worth of dinners sliding out of... Read more → 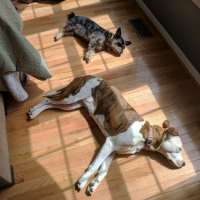 HOW MY DOGS SEE ME: Wonderful hooman! HI HELLO WOW UR PRESENCE IS AMAZE Beautiful face so haps so haps So good So kind Bet if I just knock glowing rectangle thing out of hand she'll be haps Look now ur hands are free for pets! Am hero! Oh no mad voice oh god oh no I so sry YAY PETS RUBS SNUGS Sometimes bed snuggles :) Sometimes no bed snuggles :( Confusing rules sometimes but ok Eats awful lot of cheese but shares sometimes so ok So much delicious wow how you do that Walk into room wow how you do that HOW MY CATS SEE ME Tyrannical withholder of food Cruel conjurer of inside rain water when we jus lookin for food up where you make food it's not a crime lady Dumb baby voice Food is right there won't give us food Just gave us food now won't give us more food Squishy belly is ok tho Nicer bed than our bed HEY IT'S THREE A.M. TIME FOR FOOD Maybe sort of deaf maybe just ask for food louder please to tidy our poop area peasant just poop outside the box it's okay that's how they learn... Read more →

Posted at 10:27 AM in Beau, breathtaking dumbness, Poppy, THESE TWO | Permalink | Comments (5) 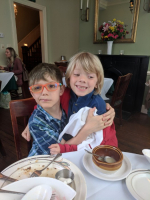 On our way out to brunch on Mother's Day, Jason backed his car (yes, the new one) out of the garage without realizing the kids hadn't shut the one of the back doors yet. Whoops. It bent the top of the door frame and messed up the window seal.* That amazing start to the day was followed by said brunch at a fancy French restaurant, where the waiter approached our table right as I hissed at Ike to stop chewing the tablecloth. "Happy Mother's Day!," he said, giving me a knowing look. "Can I get you a DRINK?" (Ike later went on to cry at the table because Jason gave Ezra half of the bread he'd just said he didn't want. When offered the other half, he said he still didn't want it, he just didn't want Ezra to have it even more.) (On our way out of the restaurant, Ike passed a bread basket on the waiters' station and was like, "OH WOW FREE BREAD" and helped himself to a few more slices.) (We tipped very well. Ike eventually settled down and enjoyed his French toast and some chilled peach soup. Ezra and Noah were angels because birth order... Read more → 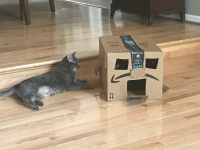 It's been a long week. Yesterday I took 40 photos of my cats having a turf war over a cardboard box, but none of them turned out as amusing as watching the actual thing unfold, which was still, like, only barely. But I have determined for certain that Rey is incapable of meowing like a normal, non-dented cat. She follows me around meep-morping like a very high-pitched robot who has a lot of questions about the nature of her existence. "Blorrrrp? Mrrrreee? Yeeeep?" I am in a box. Take me to your leader. She shrieks every time she gets picked up, even when she's come over and given you every indication that yes, she would like to be picked up. "Purrrrrr? Pllllluuuuurrrr?" she hums as she rubs against your legs, but the second her paws leave the ground she lets out a surprised and slightly-panicked sounding squawk. "BRRRRRMMEEEEEEEEEPP!!!!!" Nice upper thigh reflection, self. Sounds that startle all the other pets and send them scattering -- the vacuum, the coffee grinder, etc. -- elicit almost no reaction from her. (She definitely hears them, but simply turns her head curiously in their direction, like ah, yes, another transmission from my home planet.)... Read more → 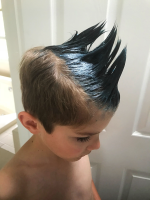 A few months ago, Ezra asked if he could dye his hair a fun color. I said sure! Why not! I am 100% on Team Your Appearance Is Your Call So Go On And Express Your Quirky Little Heart Out. (Yeah, I know, our team really needs to work on that name.) Just tell me what color you want and I'll pick up some Manic Panic or whatever. Red, he said. I warned him red would fade to pink. I don't care, he said, but then he got teased by another boy for wearing a pink t-shirt on Pink T-Shirt Day, like way to miss the entire point, you gender stereotyping jackass. So after that he wasn't so sure. He has a guitar recital coming up, and another Picture Day was today, so he decided it was time. He chose a bright turquoise, which I purchased without reading any of the fine print and missed that it promised zero results on hair as dark as Ezra's without bleaching it first. Which, no, not doing that, so I didn't have very high expectations that the color show up at all. I tested a little faux-hawk section first, but Ezra was adamant... Read more → 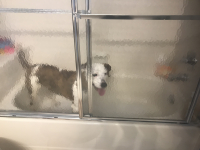 (YES INDEED. WE'RE BACK AT IT AGAIN WITH THIS SHIT.) About a week ago, Poppy kept mysteriously vanishing from the backyard, then reappearing in the front, running around in a frothy panic of WHAT DO I DO WHAT DO I DOOOOOO. Unlike Beau, she's never been much of a runner or escape artist, and for the life of us we could not figure out what was happening. The gates were closed and locked on both sides. Jason went around with nails and a hammer in search of any loose posts and I filled in a couple suspicious spots where it looked like she might be digging out underneath. And then yet again, I'd look out the front window and there was Poppy, looking just as confused as I did, like, AGAIN? HOW? WHY? (Or, if she spotted any of our human neighbors, she was invariably right at their feet and offering up her belly for rubs. I'd run over and apologize and explain the current escapee mystery, and then they'd sheepishly assure me that it was okay, they were totally going to bring her back but just wanted to pet her for a little bit first. Everybody really likes Poppy.)... Read more →