It's been a long week. Yesterday I took 40 photos of my cats having a turf war over a cardboard box, but none of them turned out as amusing as watching the actual thing unfold, which was still, like, only barely.

But I have determined for certain that Rey is incapable of meowing like a normal, non-dented cat. She follows me around meep-morping like a very high-pitched robot who has a lot of questions about the nature of her existence. "Blorrrrp? Mrrrreee? Yeeeep?" 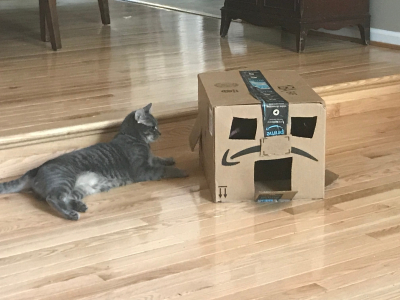 I am in a box. Take me to your leader.

She shrieks every time she gets picked up, even when she's come over and given you every indication that yes, she would like to be picked up. "Purrrrrr? Pllllluuuuurrrr?" she hums as she rubs against your legs, but the second her paws leave the ground she lets out a surprised and slightly-panicked sounding squawk. "BRRRRRMMEEEEEEEEEPP!!!!!" 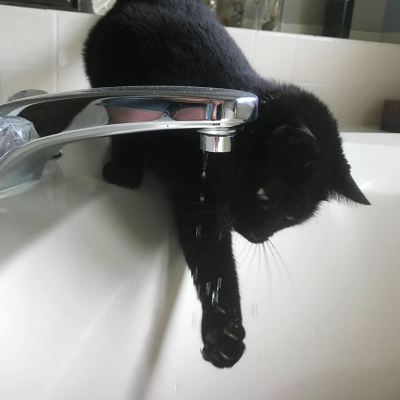 Sounds that startle all the other pets and send them scattering -- the vacuum, the coffee grinder, etc. -- elicit almost no reaction from her. (She definitely hears them, but simply turns her head curiously in their direction, like ah, yes, another transmission from my home planet.) Meanwhile, walk into a room carrying -- oh the humanity -- a plastic grocery bag or a laundry basket and she will flee in wide-eyed terror. "YEEEEP! MMMORP!"

Yes, I've spent an inordinate amount of time trying to phonetically spell out my simple cat's weird noises. Like I said, it's been a long week.

Here's a video of Ezra dancing to the Kinky Boots cast recording to kick off the weekend. I asked his permission to put this on the Internet and he said sure, just as long as everyone promises to "like and subscribe."

Nice Daisy Dukes there in the sink photo!

LOVE AND SUBSCRIBE ! But I am biased because I love Ezra best of all your kids.
Sakura kitty has some weird mews and meeps too. Savannah and Orleans didn't "talk much do this is rather new for us. And we like it! She has taken both of our hearts in just 3 short weeks. Even when she wakes me up eleventy gozillion tines a night!

I didn’t started crying at work while re-watching Ezra’s “I’m With Her” vimeo, not at all, particularly not when he recalled our “first brown-skinned President.” (COME BACK BARACK!!!!!!!!!) :,-(

Ezra dancing is super cute, but I require a cat sounds video before I can like and subscribe...

Liked, subscribed and yes, we need a kitty sound video!

1. I need blue light-blocking glasses that are that rad, as opposed to the boring, grey-framed pair I'm currently wearing. 2. Poppy performs the "perhaps food will fall/get knocked down/magically appear on the floor during this dance routine/meal prep/general tomfoolery" kitchen sweep. I am familiar with this move. 3. I've heard the MEEP from a friend's Siamese. But, it seems I know can't read MEEO without thinking of American Horror Story.

My mother had a cat named Sebastian. He didn't meow. The most we heard from him was a VERY faint meep and even that was rare. My mother had a medical emergency and when we got there (we found her as it was happening) that joker was full-on loud meowing. It was amazing. When she came home from the hospital, it was back to meep.