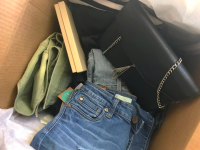 This post is sponsored by thredUP. Raise your hand if you do any of the following things while shopping online: Go on a wild Add To Cart spree only to end up with a mortgage payment's worth of items at checkout, where you get overwhelmed by the decision-making process and ultimately abandon everything. Spend a inordinately long time debating the multiple color/size options on a single item (do I dare buy something other than black? what the hell is a S/M vs. a M/L? if the model is 5'11" and somehow wearing an XXS, what time does the second train arrive in Cleveland?) before getting overwhelmed by the decision-making process and ultimately abandon everything. Scream at your screen that you JUST WANT PANTS THAT FIT AND MAYBE A NICE TOP AND PLEASE STOP TRYING TO MAKE $150 BIKINI BOTTOMS A RELATED ITEM OKAY before giving up and going back to Amazon to look at costumes for your cats instead. Ahem. Yeah, my issues with clothes shopping run pretty deep. It's why I own so many yoga pants that I dislike almost as much as actual yoga. So I very much dig thredUP's latest product offering: curated Goody Boxes that outsource... Read more → 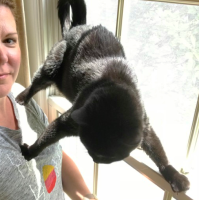 Let's take a break from the flashback-type posts and talk about today. Specifically, how I am feeling today. I feel really, really good today. I felt really, really good yesterday. And the day before that. I came home from the hospital with several follow-up appointments already made for therapy and my psychiatrist, and a lot of medication. (Well, a lot of prescriptions for medication, technically. Which Jason dropped off at Target on our way back, while I sort of shuffled behind him in the flip-flops I'd been given at check-out [I'd shown up at the ER barefoot], blinking and marveling at all the colors and sane-looking people.) I've dropped all but two of the medications from the daily regimen (because sleep is nice but so is being awake enough to like, function a level or two above comatose) and Jason keeps anything and everything with overdose potential hidden away in an undisclosed location. (He did the same thing with the benzos at first but eventually we stopped that because I never really took them and also I was feeling fine! Totally fine! Nothing to worry about here, folks.) (Back on the ward, we collectively declared "FINE" to be an unacceptable... Read more →

Being There, Part II Every morning, we were asked to set a goal for the day. These goals were written next to ours names on a whiteboard, along with our mood rating, which we ranked from one to 10. There really weren't that many goals to choose from -- attend groups, get your meds adjusted, work an AA step, and....uh...take a shower? Walk some hallway laps? Re-read the July 2016 issue of Glamour for the seventh time? -- and since this was a short-term facility, eventually everybody set the goal of discharge planning. For some patients, that meant dozens of calls to dozens of 30-day rehab centers in search of a bed. For others, a spot in an intensive outpatient program. Or a series of fraught counseling sessions with desperate and/or estranged family members, since you either went home with them or to a homeless shelter. Or not at all, for a few patients who set their goal to "discharge planning" every single day but were obviously not going anywhere. Then there was me. I just wanted to get discharged in time for Ike's birthday party on Sunday. I'd promised him a Sonic the Hedgehog cake. I needed to be there. I needed to... Read more → 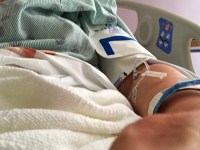 Warning: This post is graphic. Help is available for free by phone or text if you or a loved one are contemplating self-harm. I was likely never in danger of dying from the overdose itself. I was more likely to die choking on my own vomit while unconscious on the bathroom floor. Not exactly a glamorous exit off this mortal coil. They send you down to inpatient wearing nothing but oversized paper scrubs and a pair of grippy socks. I wasn't allowed to wear a bra. You can wear approved, non-drawstring clothing after your first psychiatrist consult, which usually takes about 24 hours. A few people didn't have anyone to bring them clothes and spent their entire week in those paper scrubs, which eventually shred and rip and disintegrate. We raided the ward's lost-and-found and found some community t-shirts, which could get passed along to the next paper-scrubbed newbie. Three female patients ended up wearing the same shirt with a vaguely sexist slogan on it, which they shrugged off because at least it wasn't chafing their boobs. You learn fairly quickly to always change your clothes in your bathroom, since your room doesn't lock. Your bathroom doesn't actually lock either,... Read more →

Warning: Graphic suicide talk ahead. Help is available for free by phone or text if you or a loved one are contemplating self-harm. I remember looking at the empty pill bottles on the bathroom floor. First from overhead, then at eye level. The labels blur and I close my eyes. I remember feeling cool tile on my face and relief in my veins. Done. It's done. I don't have to think about doing it anymore, because it's done. I don't remember how I got downstairs to the basement, or how long it took. Did I walk? Stumble? Crawl? Did I stop to contemplate my children's bedroom doors on the way? I don't know. Part of me wanted to get up off that floor, and it did, somehow. I remember Jason roughly dragging me towards the bathroom and his fingers in my throat. The part of me that wanted to stay on the bathroom floor wails and howls and begs him to stop. After that, there's nothing. A dream about a dark, underground bar. There's an old jukebox in the corner. I am dancing and laughing and spill a drink on Michael Keaton, who is also there for some reason. Then,... Read more → 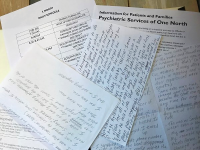 Wow. Wow. WOW. For once, I am truly out of words. Which, as you can see from all the stereotypical-crazy-person scribbling I did in the psych ward last week, literally never happens. (I wrote everything using the same kind of tiny eraser-less pencils you get at IKEA. I find that beautifully poetic, in a way.) I am out of words because you, the Internets, the peoples, the friends in both real and online life, said so many words. Kind, loving, caring and kick-ass words. Which I was not expecting. I don't know what I was expecting. (WHO READS BLOBS ANYMORE, RIGHT?) I suppose more warped depression-think led me to believe that I would hit the publish button and get either 1) crickets, 2) a couple head-pats from one or two people, or 3) a bunch of comments accusing me of Being Dramatic or Attention Seeking or Dooce Did It First or something. (Fun fact! A few weeks ago I talked myself out of calling the Suicide Prevention Hotline in the middle of the night because I worried I was just being super dramatic. Plus Jason had a really early work meeting the next morning and someone had to get to... Read more →

Where I Almost Went

There's no nice or clever way to say any of this, so let's just get right down to it. On Saturday, June 2nd, 2018, I overdosed on a combination of Xanax, Ativan and alcohol. It was not an accident. You don't swallow a 90-day supply's worth of benzos by accident. You swallow them by handful after deliberate handful. It was far from the first time I contemplated doing just that, but it was the first time I decided to follow the dark thoughts down the rabbit hole. I don't actually remember any the following, but the facts appear to be: After passing out on the bathroom floor for awhile, I somehow managed to make it down several flights of stairs to Jason, who was watching TV in the basement. After unsuccessfully trying to make me throw up, he called 911. An ambulance took me to the ER, where I was intubated, restrained and deeply sedated. (I was also, according to my report, deeply "combative" and definitely nobody's favorite patient that night.) I spent most of Sunday in the ICU, drifting in and out of consciousness. Usually just long enough to claw at the painful tube in my throat and then... Read more → 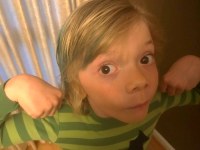 Today our littlest biggest ham is 7 years old. He's grown and changed so much, and yet... He's still SUCH a Baby Ike. He still likes that nickname, by the way, and has made me promise multiple times to never stop using it. Once in awhile, anyway. Maybe when it's just us. Just as a reminder that no matter how big he gets, he'll always be my baby. At 7, he's bubbly and social and everyone is his friend. He'll flit from house to house in the neighborhood in search of playmates, until our entire cul de sac is filled with kids riding bikes, scooters and skates. Half of whom I've never even seen before. An epic game of hide-and-seek breaks out. The big kids play basketball until Ike talks them into joining the game, while he also hauls out bubbles and chalk for the little kids and the babies, who are not-so-secretly his favorite. He still stops by his old kindergarten classroom every morning before school starts to give his teacher a hug. Every. Dang. Morning. I asked him how he's going to find the time to hug her AND his first grade teacher next year, and he said... Read more →