We're coming up on another anniversary -- our three-year anniversary with Yellow House and our new little neighborhood.

I'd say it's still going well. 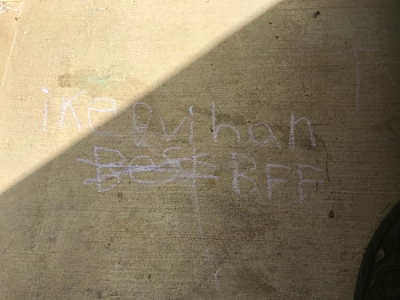 I love the 1) curious attempt at an apostrophe between their names, 2) the abandoned attempt to spell "friends" before opting for the much simpler "BFF" and 3) the fact that Ike went back later and wrote the names of several other neighborhood friends because he didn't want to hurt anyone's feelings.

This has been Friday Happy, something I just now made up as an excuse to end the week with something that made me smile real big.

My Friday Happy is a throwback. I'm in the middle of listening to the back catalogue of the One Bad Mother podcast. Imagine my surprise when I heard your voice on a an episode! It was great to hear you on there from years ago and I'm glad you're still around on this blog :-) I'm a long time lurker and enjoy reading your posts and it was pretty neat that our worlds collided this morning. I thought about writing you about it, but thought that would be silly. Then you posted this "Friday Happy" post and it just seemed like the universe was telling me to let you know how much you brighten my day. I'm so glad you're getting the help you need and seems to be in a better place. The internet is lucky to have you :-)

I love it! could this please become a regular feature? My Friday Happy is the Blue Apron delivery arriving tonight; after reading about it for so long here, I finally caved and got my first delivery last week, and it was a raging success. Tonight: seared fish and farro salad, and we're saving the poblano stuffed peppers for Sunday dinner. So, thanks to you for that, too!

Love the kids note!
My Friday Happy is that we decided on the wall tile, shower floor stones and bathroom floor tile for our bathroom gut job! Now we have to decide on fixtures, vanity and toilet. Next week!