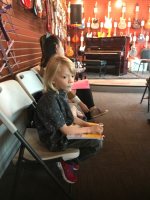 UPDATE #1: I folded the laundry! All of the laundry! I guess I should've taken a photo to better communicate just how much laundry we were talking about, but it was too embarrassing. Even depressed people are entitled to some small slice of vanity, right? Anyway, it's all put away now, and I even tackled the spring/summer closet changeover to fall/winter. Then I took a nap. UPDATE #2: Speaking of the changing of the seasons, our patio toads have left us to hibernate for winter. I will miss them terribly and hope they'll be back next year. Maybe I'll register them as emotional support toads and let them loose on an airplane! UPDATE #3: Ike's IEP meeting...happened. Given the glacial pace of assessment testing (since the independent assessments we paid for didn't line up 100% with the district's standards, aaaaaaahhhhhhhdjvojfohfvoiwehfgpeh), Ike will be lucky to get formal supports and services in place by...Christmas. Aaaaaaahhhhhhhdjvojfohfvoiwehfgpeh times eleventy. So we are very, very relieved we jumped on the ONE OPEN SPOT his reading program offered us and didn't dick around any longer. He loves going, and while it's not an overnight fix or anything, I can already see some confidence creeping back... Read more → 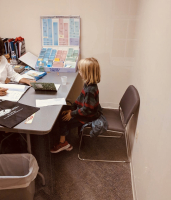 The first sign of trouble was that I stopped washing my face. Some days I'd go to bed with my makeup on, and just...smear away the raccoon streaks with my fingers the next morning. I knew this wasn't great self-care, so just I stopped wearing makeup most days. But I still didn't wash my face. Other bad habits crept in after that. The laundry went unfolded. My hair went unwashed. Texts went unanswered. Work deadlines were stretched to the absolute limit, and I started working from bed again. I gained more weight, so I rarely changed out of my pajamas because I couldn't face my actual clothes. I was tired -- so, so unbelievably tired all the time, and I would regularly sleep through most of the afternoon. I told myself it was just fatigue from my antidepressant. That there was nothing wrong with wanting to work while nice and cozy and curled up with the cats. That I'd get to the laundry that afternoon, that night, that weekend. And then one night, it was there again. That flash of inevitability, a hopeless swirly thought of no other way out. So...it's been a rough few weeks. I was fine, and... Read more →

One decade ago, I met a fascinating little human named Ezra. (He was, initially, a little less thrilled to be here.) Of the three of them, Ezra is the one whose personality seeming popped out fully formed from the womb. He's just a taller version of himself now. Not to say he's not always full of surprises. We didn't see the flute coming (loves it, obsessed with it), and last week he came home from school and announced -- after years of rejecting any and all team sports like soccer or basketball -- that he wanted to sign up for our county's cricket league. Cricket? Are you sure? 100%. Cricket. Yep, seems about right, actually. He's a dreamy romantic (currently living through his first predictable heartbreak, alas), a sensitive empath yet wonderfully self-assured and confident, and someone for whom farts and burps are the pinnacle of comedy. He is incredibly kind and quick to compliment others, and insists on holding the door for everybody, because manners. No, he won't take off his glasses, they're important, and he asked that instead of a closet full of Noah's t-shirt hand-me-downs if he could possibly get more button-down shirts. "I like looking fancy,"... Read more →

That feeling when you've de-fluffed and de-squeaked your favorite toy and haz ragrets. I suppose it's reassuring that the Internet is still the Internet, even after all these years. Dissecting bloggers' finances when they dare put up a donate button or Amazon wishlist or whatever (LOOK AT THAT GRUBBY FREELOADER BUYING STARBUCKS!) is a tale as old as 2003. I get it! I really do. But...it's my kid. My Ike. I owe it to him to do EVERYTHING I can to get him the best help possible, even if that means being the tacky-ass mommyblogger asking people who also care about Ike or enjoy reading about him would like to help him in this very specific way for this very specific purpose. (But it's okay if the answer is no! I won't pack up my blog and go home or anything.) I know I should just be like, whatever, but I found myself arguing with the shower wall this morning: The Vegas anniversary trip had been planned for (and saved for) for almost five full years. (We also tacked it on Jason's business trip to save on airfare and hotel.) We went super-cheap on our beach vacation (hence the whole... Read more →

All Creatures Great and Weird 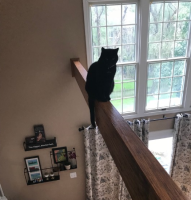 So. Moving on! We had Ike officially assessed for dyslexia last week, and lo and behold, he is indeed dyslexic. Classically, wildly so. I'm not at all surprised, but now we're stuck in that annoying treading water period between diagnosis and treatment. We're waiting for a spot to open up at a private reading center, and an IEP meeting with the school is scheduled for later this month. I'm not super optimistic about the services the school can offer, and while I think we've found an amazing program that Ike will respond to really well, it's intensive and face-punchingly expensive. But of course we'll do it, because OUR BABY CAN'T READ GOOD. (Does anyone have any experience with Patreon? What do y'all think of that as opposed to say, a GoFundMe or just a PayPal donate button somewhere? Basically, what's the least tacky way to blog-grift nowadays, is my question?) (I'm taking on more work from several corporate clients already, before anybody tsk-tsk about getting a "real job." I have one! I have several! Also several painful neuroses and deep-seated anxiety issues about money and finances that my therapist says are okay to just acknowledge sometimes!) Anyway, back to the... Read more →

(WARNING: Mega-political rant with a deep dive into sexual abuse/assault territory.) Back when the #MeToo movement was first getting started, I sheepishly confessed to my therapist that all I could really bring myself to say about it was a Facebook vague-post with just the hashtag and nothing else. She -- correctly -- told me that NO ONE was owed or entitled to my story. No. One. And then, like millions of women, I watched Dr. Christine Blasey Ford's testimony last week. It was brave and powerful and we were not owed it or entitled to it, but I was deeply grateful to her for telling it. And in front of such a...well...less supportive and understanding audience than say, Facebook or my blog comments. And then! I watched the president of the United States of America (after managing to keep his mouth shut for...what? Five whole days?) stand in front of an audience and mock her, repeatedly. (Using the same turn of phrase -- "I don't remember! I don't remember!" -- he used when mocking a disabled reporter so many moons and scandals ago, back before the pivot to presidential that never came.) And I watched the faces behind him erupt... Read more → 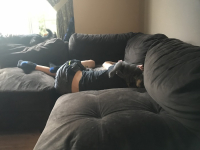 Noah is 13 years old. This is not a drill. Noah, the baby, the turtle, the little sign-language a-BALL!-loving toddler who went to kindergarten with a backpack as big as his entire body, is now a teenager. He asked for a cake and candles, but no singing. He wanted to shop for his presents himself, and no wrapping paper. He played video games most of the day, but also coded a new level in the Sonic the Hedgehog clone he built by himself. He asked for pizza for both lunch and dinner, but agreed to order it off the grown-up menu. He requested a day off from chores and for permission to repeat his favorite annoying Internet meme as many times as he wants. (Usually he's limited to just a few times before I remind him that it's gotten annoying in the very best way I know how to communicate that point to him, which is to start belting out the chorus of Let It Go. He slaps his hands over his ears and shouts "OKAY OKAY I GET IT I'LL STOP.") He may be 13 years old, but he's still as Just Noah as ever. Read more →