Home Archives About Subscribe Advice Smackdown Tip Jar
Then ; Now
Me, As Well, Also, Too

This is not a drill.

Noah, the baby, the turtle, the little sign-language a-BALL!-loving toddler who went to kindergarten with a backpack as big as his entire body, is now a teenager.

He asked for a cake and candles, but no singing. He wanted to shop for his presents himself, and no wrapping paper. He played video games most of the day, but also coded a new level in the Sonic the Hedgehog clone he built by himself. He asked for pizza for both lunch and dinner, but agreed to order it off the grown-up menu. He requested a day off from chores and for permission to repeat his favorite annoying Internet meme as many times as he wants.

(Usually he's limited to just a few times before I remind him that it's gotten annoying in the very best way I know how to communicate that point to him, which is to start belting out the chorus of Let It Go. He slaps his hands over his ears and shouts "OKAY OKAY I GET IT I'LL STOP.")

He may be 13 years old, but he's still as Just Noah as ever. 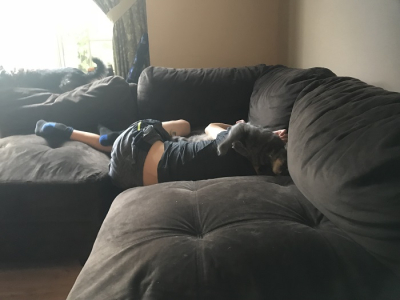 That box video is just the best. I love security cameras for this kind of thing (like catching my 5yo mooning in the backyard, which allowed me to laugh inside before going out and busting him with my omnipotence).

This is so crazy. I was hoping for a blog post when I saw the mini-post on social. He is so giant and grown! I remember the a-BALL days! I hope his teenagery-self still allows you to talk about him here; his story has helped me so much with my own quirky kiddo. Happy birthday Noah!! <3

The box going down the driveway will never get old. Kind of like deodorant wars and #tirewatch

Sunrise, sunset! HBD, Noah, I cannot believe you are a teenager!

I started reading your blog in the summer of 2005, just before my son Payton was born - 2 weeks to the day before Noah and 2 weeks to the day after (Sundry) Linda's Riley was born. Even though we've never met and our kids have never met I feel this weird bond with the 2 of you, having boys the exact same age, going through their milestones around the same time. I cannot believe it has been 13 years! My son also played video games most of the day, at first refused to go out to any sort of family dinner but finally agreed to MOD Pizza at 9pm, and only wanted cash so he could choose what to buy for his birthday. HBD, Noah! I hope 13 is a great year for you!

I always remember this because he was born just 2 days before my little girl. I discovered you when I was on bed rest for the last 2 months of my pregnancy! Talk about disbelief - I've been coming here those 13 years watching this kiddo (and his brothers) make their way in the world just like my kiddo. I couldn't be happier for how far he's come, how incredibly talented he is and his ability to use the fact that he sees the world a bit differently than we do as a positive and a way to be uniquely himself. Happy Birthday Noah! PINGAS!!!

UN-BE-LIEVABLE!!! I remember the "ABEAH" days! I can't tell you how much I love watching your boys grow up and become these amazing humans. Happy Birthday Noah! And Holly (in comments) yours made me snort laugh.

I can't even with the box video. Hahaha.

Happy birthday, Noah! Congratulations to mom and dad on 13 years of parenting. You're surely made of magic.

Happy birthday, Noah! Congratulations, Amy and Jason. Also, just in case you ever still feel twinges about not having a girl. My 8 year old girl has finally outgrown Frozen, but not before introducing her 3 year old sister to it. I may have 5 more years of Let It Go. Send wine.

And congrats on the amazing kid, Amy and Jason.