This week, Ike sat down and wrote out his Christmas wish list. AND I COULD READ IT. It wasn't perfect, but it was a far cry from past writing efforts that I couldn't make heads or tails of, and would even stump him when he tried to remember what he meant by words like LOUUOB or WOEABL. (Those were "LOVE" and "WORLD." Of course.) Ike loves loves LOVES his reading program. I'm pretty pleased with it as well, because...look at that! "Dimensions??" Are you kidding me? (He's asking for a Bumblebee, Pokemon cards, a new Lego Dimensions disc because ours got scratched and doesn't work anymore, and Minecraft Story Mode Season 2. Ezra's list asks for a computer, a diary WITH A LOCK, and "12 pairs of pants.") Meanwhile, his school STILL has not completed the assessments or made any changes to his IEP. His general education teacher is doing what she can, but it looks like official supports and services won't happen until next semester. So I'm very glad we're making progress on our own. We went with a newer program called SpellRead, which claims to be able to essentially rewire a dyslexic brain to process language and text... Read more → 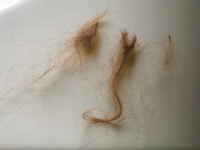 I cut this off the back of my head yesterday. Depression doesn't have a lot of visible symptoms, but that right there is one of mine. Day after day of unwashed, uncombed hair, convinced that no one will notice if I just pull it up and cover my greasy, knotty tracks with a head band and messy bun and the tried-and-true aesthetic of "I AM WEARING WORKOUT CLOTHES SO THEREFORE I MUST HAVE COME FROM THE GYM, CAN YOU NOT FEEL MY BURN?" Between the amount of time I spend piling on the dry shampoo and extra hair spray, getting the shower and actually washing my goddamn hair would probably be a timesaver, but then I'd have to fully confront all my other self-care failures: the weight gain, the muscle loss, the unshaven...everything, my neglected skin and nails. And I'd have to argue with the mean little voice berating me for spending money on nice shampoo. I could shave my legs if I changed out the razor blade, I think, and the voice immediately tells me "you don't even deserve a new razor blade." And so another day, another ponytail. I went to brush my hair yesterday because -- oh... Read more →

A Bruh To Remember 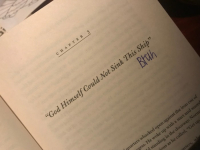 So Titanic is totally the new George Washington. View this post on Instagram And we haven’t even BEGUN to discuss whether Jack could’ve fit on that door... A post shared by Amalah (@amalah) on Nov 14, 2018 at 4:39pm PST Noah is next-level obsessed with all things Titanic right now. Movies, books, documentaries, endless recreations in the bathtub, you name it. His twin life goals right now include a ride on Titanic 2 and making enough money to raise the original wreck before the ocean eats it. (How he'll achieve the second goal is a little fuzzy. It's either inventing time travel or "something with computers.") I, too, went through a pretty big Titanic phase around his age, so it's been fun tracking down all the books I read and still remember pretty vividly. One of my favorites was A Night To Remember, and I promised him I'd re-read it after he was done so we could talk about it. (That is a Very Big Deal for a Spectrum kid, as he's aware most conversations about his obsessions are more like endless, one-sided lectures.) He read it, he loved it, he's already watched the movie version four times. And as... Read more →

Who I Cook For 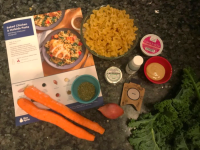 This post is sponsored by Blue Apron. The first 50 readers to sign up with this link will get $50 off their first two weeks Blue Apron! My mom tried to teach me how to cook growing up. But for the most part, I was passionately disinterested. It was like I was downright determined to head off into adult life without the ability to scramble an egg or function without a microwave. I loved to help ("help") her bake cookies, of course, because cookies, and cookie dough, plus we stored all the Christmas cookie cutters in this weirdly inaccessible corner cabinet in our kitchen and I was the only one small enough to climb in and find them. I would toss them out and then pretend I was in Narnia for awhile while my mom did all the work. Anything else cooking related, I wanted nothing to do with. It was boring, I'd probably mess it up, why go through all that work when I'd rather just eat peanut butter and jelly sandwiches? Do you know how easy it is to microwave a hot dog? Why can't we just always eat hot dogs? But still, she tried. Family dinner time... Read more →

Stupid Babies Need the Most Attention 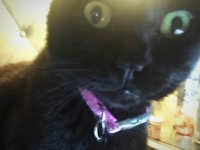 Who's done with this week? I am DONE with this week. What I am NOT done with, on the other hand, is the faces my cat makes into the front-facing camera. ME: when I turn on the front-facing camera by accident. ME: opening up Google News and just, like, the headlines alone these days ME: on a late-night Wikiwormhole about serial killers. ME: reading the comments when I know I shouldn't be reading the comments ME: when I feel cute, might delete later tho Read more → Hi hi hi. I'm okay. I know I don't usually go that long without posting but it felt disingenuous to sit here writing about how Ike got an entire container of green Halloween slime stuck in his hair when everything else is going to hell in a reusable grocery bag and WHAT KIND OF WORLD ARE MY SLIME-COATED CHILDREN EVEN GOING TO INHERIT, PEOPLE? GET YOUR BUTTS TO THE POLLS. I voted, Jason voted, everyone we know has voted. Now there is nothing to do but wait and pray and stress-eat another package of Kraft singles. I got the slime out of Ike's hair, incidentally, with blue Dawn dish detergent, after several of the Internet's other suggestions for How To Get Slime Out Of Your Hair did not do the trick. Blue Dawn: The only thing you need to get slime out of hair and lipstick off cats. They should hire me for copywriting. We forgot to take any photos of Halloween, so you're spared that parade of awkwardness. Jason and I skipped dressing up, but Ezra and Ike made their own costumes: Ezra went as "Joey Reddabber," an original comic book character he created, and Ike dressed up as... Read more →